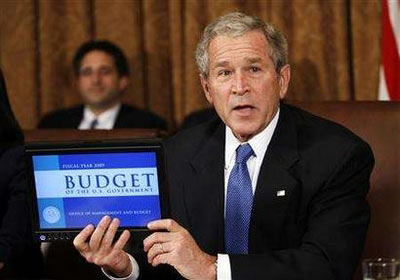 Bush reads from My Pet Budget

Let’s talk about how we ended up in this pickle, bucking up against the “debt ceiling.” From 2001 to 2008, a Republican President took an annual surplus of $86 billion left for him by Bill Clinton and ran up the budget deficit to over half a trillion a year ($642 billion in 2008). Altogether, George W. Bush blew up the national debt by over $3 TRILLION–then left the bills to Barack Obama.

For eight years, Bush spent like a drunk monkey. The world was the GOP’s Bergdorf’s and they had our credit card. If there was a shiny new war on the shelf, they just had to have it: Iraq, Afghanistan, and let’s not forget the Fantasy Wars, the half a trillion dollars a year on fancy-ass weapons for a war that won’t happen. (Example: the Virginia Class submarine. The V-class was designed to attack Soviet subs. There are no more Soviet subs, but Bush ordered three dozen anyway–at $1.8 billion each.)
And tax cuts? Don’t get me started!
The Bush Administration acted just like Sarah Palin when she was set loose in that Neiman Marcus in Minneapolis–grabbing whatever she could carry because Sarah could put it on someone else’s account.
The GOP’s fattened frat boys feasted–but when the waiter arrived with the bill, the belching rich kids looked around, pointed at some poor schmuck sweeping the floor, Mr. John Q. Veteran, and said, “THAT GUY will pay.”
By the way: Congressman Cantor, the guy leading the Republicans’ refusal to lift the debt ceiling, voted for the V-class sub as well as Bush’s bogus scavenger hunt for weapons of mass destruction in Iraq. But now Cantor doesn’t want to pay the bill.
Y’know, Congressman, maybe you think my parents were fools because they taught me: If you buy it, you pay for it.
Apparently, that’s not the rule at Cantor’s country club.
The sick assumption of this entire debt ceiling debate, as we hear from talking heads whether on Fox or PBS, is that this is our deficit; as if you and I got a tax break or Amazon delivered that submarine to our door.
And the flapping lips on TV also assume that there must be some kind of “compromise” in which the spending spree by the rich must be paid for by the working class. The Washington elite agree we must pay for tax holidays for hedge funds by closing health clinics.
Of course, the GOP is right about one thing. President Tiger Wuss will do just that: make the poorest among us pay the debts of the richest. Here we have a bunch of economic terrorists–“Agree to all our demands or the economy gets it!”–and Obama’s idea of leadership is to offer the berserkers three-quarters of what they demand.
Thank the Lord and Michele Bachmann that 75% isn’t enough for these greedsters.
Solution: Don’t pay the banksters
There’s another wrong assumption controlling this debate over debt, that the banks, the debt holders, must be paid. When the bankers and the Chinese and the Saudis lent Bush three trillion dollars for his wild-ass buying party, they were betting, like any investor, on the good faith of the borrower to pay it back.
So, let Hu Jintao and King Abdullah stick a collection agency on Cantor and the other Republican shirkers. Repossess their limousines or send The Boys around to remind Cantor what happens when you don’t pay what you owe.
The President should say to Hu, the Sheik and Goldman-Sachs:
“I have identified $3 trillion in Treasury notes issued between 2001 and 2008 which were lent to fund President Bush’s expenditures. Unfortunately, those who borrowed your money don’t want to pay it back. You made a bad investment — but that’s how the free market works. Therefore, I am suspending payments on these Treasury notes until we can round up the deadbeats and make them live up to their commitments.

“As President, I have the Constitutional duty to pay the bills of the Veterans Administration, the Social Security fund and other vital services already voted and appropriated by Congress. Military pay before banker pay. Get used to it.”
Will the bankers have heart attacks? I hope so. (Maybe if bankers are ill, the GOP will vote for universal health care.) Will China refuse to buy more US debt? Not a chance: The Chinese cannot afford a devaluation of the $2-3 trillion in US Treasury notes they have in their pokey, a devaluation which would surely follow their abandoning the US treasuries.
Note: Argentina defaulted and thrived. We can tango too. But that’s all detail for me to argue out with other economists in some effete what-if seminar.
Ultimately, “default” is not the issue. “Default,” dear Brutus, is not in our stars but in that age-old battle between Them and Us. They spent the money and now they want Us to pay.
Default lies with the Republican spendthrifts, Mr. President. So I suggest you issue an executive order creating a new wing at Guantanamo: a debtors’ prison for trillion-dollar deadbeats.
(Don’t you think Eric Cantor would look good in orange?)
***
Greg Palast, a forensic economist, is a Puffin Foundation Fellow for investigative reporting. He is author of the New York Times bestsellers The Best Democracy Money Can Buy and Armed Madhouse.
Subscribe to Palast’s Newsletter and podcasts.
Follow Palast on Facebook and Twitter.
GregPalast.com