Here’s an easy way to spoil a vote: digitize it . . . then lose the digits. 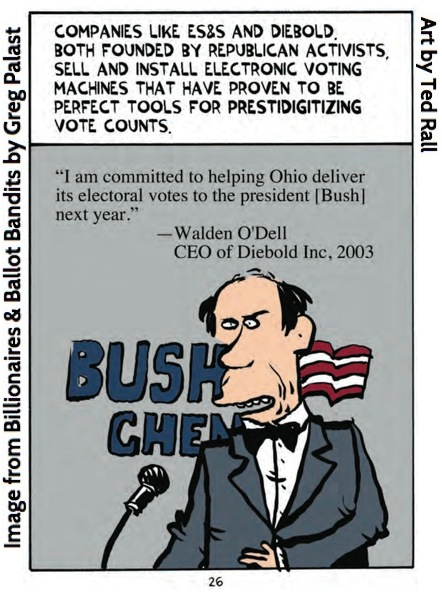 Prestidigitation is the French-derived term for conjury, legerdemain, sleight-of-hand, presto-change-o hand-jive, disappearing trickery . . . or, in the language of Karl Rove, “Helping America Vote.”

Following what the media called the “Florida debacle,” the winners of the debacle agreed to “reform” the voting system. So the Bush administration proposed and Congress passed the Help America Vote Act.

The best way to prevent voting reform is to pass a voting reform bill – especially if it’s written by the folks that helped themselves to your vote in the first place.

The Help America Vote Act is not the most Orwellian named, satanic law ever passed by Congress, but it tries. To avoid ballots with hanging chads, the law simply does away with ballots, providing about $4 billion in subsidies for Direct Recording Equipment (DREs), better known as “computer ballots” or “black box voting.”

Not to be confused with votes changed via sophisticated software hacking, simple “glitches” that caused the computers to break down or simply fail to record the vote caused over half a million (546,000) votes to disappear in 2008. In 2012, expect even more to vanish.

This little-glitch-here, little- glitch-there pattern has the odd attribute that it occurs 491 percent more often in Hispanic precincts than white precincts, and in black precincts it’s worse.

Computer voting machines have a lot in common with slot machines in Vegas. You pull the lever and the result is, you hope, a happy one. Except that slot machines are scrupulously honest, well regulated, and operate properly and transparently.

Now, you’re probably expecting me to tear off into a screed about how easy it is to fiddle with a computerized voting machine (it is), how there’s rarely a “paper trail” to verify your vote (there isn’t one), how the software can be hacked, cracked, hijacked, and name Donald Duck to Congress or Chuck Hagel to the US Senate. (Republican Senator Hagel, who founded the biggest voting machine company, ES&S, was elected with an astonishing number of African American votes, his skeptical Democratic opponent told me, right after his machines were installed. Obviously, a sore loser. Or sore winner. We’ll never know which.)

I once suggested to President Hugo Chavez of Venezuela that if he didn’t like US foreign policy, he should buy into a voting machine company. So, his buddies did just that.

But I’m not going to talk about the vulnerability of these “black box” machines to hacking and unknown software manipulation.

First, because there are smarter experts than me who can do a better job of explaining it. (Please read the reports of Professor David Dill at Stanford University, Steven Freeman of the University of Pennsylvania, and the stellar reportage of Brad Friedman.)

I’ve picked up from them that the good news is you may not lose your vote in the 2012 election. In fact, you may have already voted””and in November they’ll tell you whom you voted for.

So, instead, I’m going to tell you about the known ways black boxes have stolen elections. And it doesn’t take a Stanford math professor to figure it out.

The number one way to steal computer votes in America is to unplug the computer.

And dumb-ass variants thereof. The problem with computers is that they don’t work. At least not for voters.

Example: In Sarasota in 2006, Republicans held on to the congressional seat vacated by Katherine Harris by a mere 369 votes after new computerized voting machines simply failed to record a choice in the race on eighteen thousand ballots, mostly from Democratic precincts.

The Republican county elections supervisor claims that the eighteen thousand voters simply didn’t want to make a choice. It was the top, hottest race on the ballot; eighteen thousand drove to the polls, went in, then walked out without making a choice. Oddly, this seemed to happen among voters marked BLA in the records, as opposed to the WHI voters.

There’s always the innocent explanation, which is never, in fact, innocent. In some Florida precincts, the BLA precincts, poll workers were given the wrong passwords for the machines so no one could vote.

In a tight contest in Georgia, Diebold machines simply refused to operate and record votes in several black precincts. According to the company, the machines don’t work well in very humid, hot conditions. “Well, what do you think we get in Georgia in July!” the losing candidate, Congresswoman Cynthia McKinney, told me. In the white precincts, voting was held in air-conditioned suburban school gyms.

While the software varies from maker to maker, all DRE computer voting machines have one thing in common: like the man who shot the youngster Trayvon Martin, voting machines are really afraid of black folk. And brown folk.

Theron Horton, a Taos-based data analyst who assists the Election Defense Alliance, has discovered that Hispanics who vote on electronic DREs are 491 percent more likely to have their vote disappear.

And Native Americans? Computers just hate them, just don’t want them to vote. The nonvote rises by over 1,000 percent for Natives who vote on DREs versus votes spoiled on paper ballots.

How does this happen? Simple. Low-income towns get crappy schools, crappy hospitals, crappy police service, crappy everything. It would be absurd to think they’d get anything but the crappy voting machines.

When I went to the Taos Pueblo, they were voting on ancient Shouptronic machines that should have been in the Smithsonian. We don’t give Natives used blankets with smallpox bugs anymore, just the used voting machines with mechanical bugs.

This is an excerpt from Greg Palast’s brand new book:

Billionaires & Ballot Bandits: How to Steal an Election in 9 Easy Steps

Even when the better machines are funded by the state, the training is lacking, the conditions of operation suck (see Georgia summer above), et cetera, et cetera.

It’s that class war thing again. And in America, class is race.

If you know it’s going on and you don’t change it, it’s deliberate.

That’s the word from the dean of county elections supervisors in Florida, Ion Sancho, the only nonpartisan election official in the state. He runs the elections in whiter-than-white Leon County, home of the state capital, Tallahassee.

He let me try out the machine he set up for Leon voters: a paper ballot that is electronically read. I voted for Ralph Nader and Pat Buchanan for president. That is, I deliberately “overvoted” (voted for two candidates for one office), spoiling it. When I stuck my ballot in the reader, it spit it back at me and told me I voted for both a consumer advocate and a pinhead bigot and had to choose one. In other words, I couldn’t spoil my ballot. I got another ballot and made the correction.

In Sancho’s last presidential election, there was not one spoiled ballot in his entire huge county.

Hot damn! If Florida officials knew about these machines, there would not have been 179,855 hanging chads and overvotes in 2000.

But they did know. “I invited the secretary of state to look at these machines,” he said, “before the election.” Harris could see Sancho’s office from her window in the State Capitol Building. She just had to take the elevator down, or jump.

She didn’t jump, nor did she take the elevator, even after Sancho told her of a deadly urgent problem. The county next door, Gadsden, the poorest and blackest in Florida, had also installed these cool miracle ballot-readers but could only afford a couple of them, which were kept in a central office. The result: the machines would reject all “spoiled” ballots – but by then the voters were far away and long gone.

Sancho realized that this would disenfranchise a massive number of poor voters in that county. It did: the blackest county in Florida had the highest spoilage rate of all.

Harris refused to fix it beforehand and refused to correct it afterward. (For example, this is where I saw ballots rejected by the machine because many voters had written-in “Al Gore.” The ballot required it, but the machine couldn’t read it – and Harris wouldn’t count it.)

Why the heck am I reaching back to another story about Katherine Harris? Because she was the test run, the model for the rollout of the program nationwide.

That case of the eighteen thousand votes the machines didn’t record in Sarasota six years later? The voters of that county voted to ban paperless computer voting – but the GOP county supervisor deliberately ignored the voters’ will. Then he bought the paperless machines that took away their will forever.

While Florida does not permit felons to vote, robot voting machines can, and as often as they like. 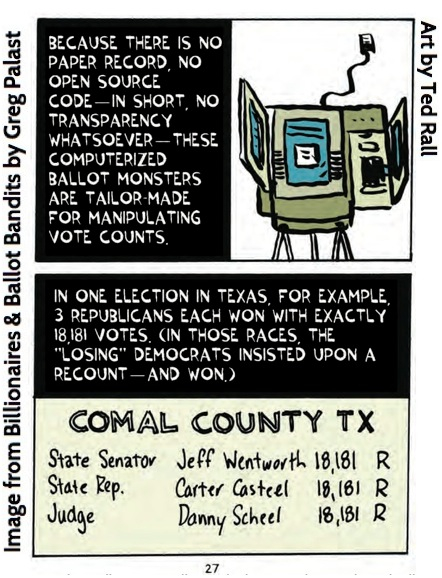 With all that money to Help America Vote, you’d think the USA would be holding elections using the in-precinct, no-spoilage-possible, paper-ballot optical reader. As Sancho points outs, the fancy-pants paperless computers cost five times as much as the optical reader and produce twenty times as many spoiled ballots as Sancho’s lower- tech cheapie.

So why spend more money to get a machine that doesn’t work? Colorado’s state voting task force attorney Hultin suggested one answer to me. “It’s very disturbing,” he said. “This law was corruptly influenced. Jack Abramoff who was a lobbyist for Diebold, the largest manufacturer of electronic vote machines. He’s in prison – and [Congressman] Bob Ney who was the Chairman of the Government Operations Committee, is in prison for selling favors to Jack Abramoff in connection with [the Help America Vote] Act. So a subsidy went out: $1.5 billion to subsidize purchases of Diebold machines.”

“So,” said the conservative official, “connect the dots.”

Oh. Hultin said they found, and Diebold admitted, that votes are lost when the memory cards are removed from machines to gather the tally. It simply looks like “undervote,” or spoilage, to the counters. Again, this is not about switching votes from one candidate to another, but the subtle, nastier method, the untraceable “glitch.” But glitches that seem to occur in Black, Brown, and Bluish precincts.

But the question remains: So why spend more money to get a machine that doesn’t work? If you don’t know the answer by now, you’re not paying attention. Paperless DREs do work perfectly . . . for those who buy the machines.

Remember Paul Weyrich’s command to the faithful: We don’t want everyone to vote. Nor do we want to count their votes. And if you can get a Ku Klux robot to do the job, price is no object.