Interview with De’Andre Harris: Beaten by Neo-Nazis in Charlottesville

No, the terrorist attack on peaceful counter protesters Saturday in Charlottesville was not an isolated incident. Anyone who says that is lying to you.

Google Maps still lists the Charlottesville park, where I was first pepper sprayed this weekend, as “Lee Park.” The city disagrees, saying that it’s now Emancipation Park.
Either way– massive statue of Confederate War General Robert E. Lee still towers over the park, which today is filled with grown men wearing hockey gear and holding home made shields that a 12-year-old LARPer would be ashamed of. This is, or least was supposed to be, the “Unite the Right” rally. At my other job I cover comic book conventions, and my first impressions of this rally reminded me of those conventions just a bit too much to take seriously. 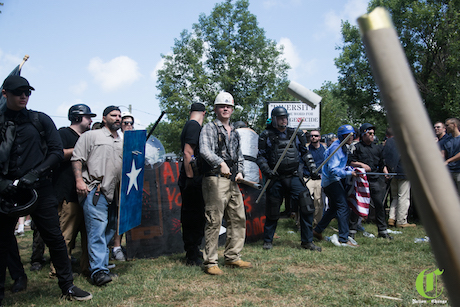 But then there’s the tear gas And the home made weapons And the real weapons, like AR-15’s and Glock 9mm’s None of that would be allowed into the San Diego Comic Con.
But here I am in the middle of a park named after a guy that fought for the right of Southerners to keep human beings as slaves, and there are a couple hundred people screaming about why this statue needs to stay. They’re claiming that its removal is all part of a plan to erase the history of the white people
I’m white, and that’s not my history. But if it was, I’d WANT it erased, or at least not memorialized. Less than three hours later I would witness something that I hoped was left in the waste bin of American history: In this post-racial’ America I witnessed De’Andre Harris, a young black man, kicked and beaten nearly to death by racist goons.
No, the terrorist attack on peaceful counter protesters Saturday in Charlottesville was not an isolated incident. Anyone who says that is lying to you. They’re trying to cover for something that has been seething with hatred in the putrid shadows of America. 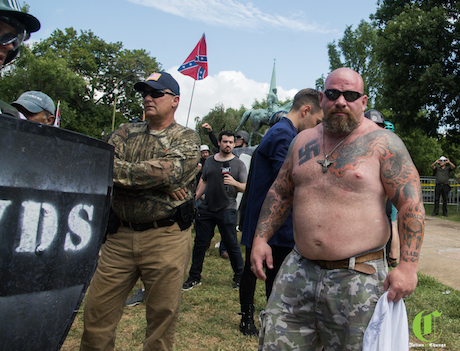 My skin was burning from something sprayed on me earlier in the day as I followed a march of white supremacists. After the tiki torch rally Friday night, my entire body ached from trying to keep up with fascists in comfortable shoes. As the white supremacists marched down Market Street, members of the community shared their opinions of the white men – yelling at them, “Not in our town!,” “You’re not welcome here, go home!” Those marching responded with accusations of them being the “reason” for the “death of the white race.”
De’Andre and his friends were marching too. Walking along side, they were yelling for the rally members to go home. They got racial epithets as responses. It was going fine well as fine as something like this can go – until something out of my vision happened and everyone started running. I followed De’Andre who was clearly already hurt and getting chased by nearly a dozen white supremacists.
De’Andre Harriss, a young man who works as an assistant special education teacher in Charlottesville, was slammed with shield into the parking arm of the Market Street garage and landed hard. This is when he says he lost consciousness. Seconds later, he woke to fists, clubs and boots. Trying to get up and flee to safety, he was knocked to the ground again by the white terrorists that were attacking him for one reason and one reason only: De’Andre is black.
Getting hit time and time again with the broken pieces of the parking arm, he curled into the fetal position. Five or six men continued the assault until De’Andre’s friends came to his rescue. The nearly dozen white supremacists that were either actively attacking this young man or standing by creating cover scattered from the scene like cockroaches when the light is turned on.
As I turned to follow De’Andre to see if he was ok and to get his information – I was confronted with a handgun – a 9mm Glock to be exact. A white male with a camo hat and military style t-shirt and pants was in the ready position – ready to defend himself. As soon as he noticed me taking photos of him, he holstered the fire arm. Virginia is an open-carry state. 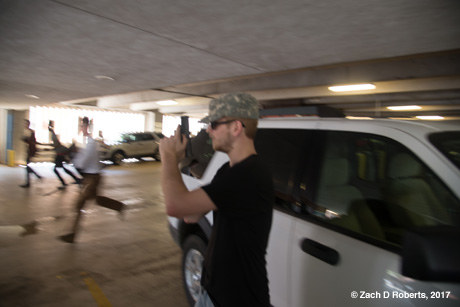 The police were nowhere to be found. That was a continuing thread for a lot of the incidents that happened during this weekend of hate in Charlottesville. Police would convene in large numbers in spaces that were nowhere near the action. They would also not even attempt to make their presence seen when the fascists went on their marches about town.
This is what we call a “stand down order.” You see it usually when groups like Black Lives Matter are allowed to march through the street without getting much of a hassle. Police assume that protesters will just tire themselves out and not stick around if there are no confrontations to get riled up about. Typically in these situations, the police will immediately swoop in if they see a crime or violence happening
The Charlottesville PD didn’t seem to get that part of the memo. They just stood by and let pretty much anything happen. 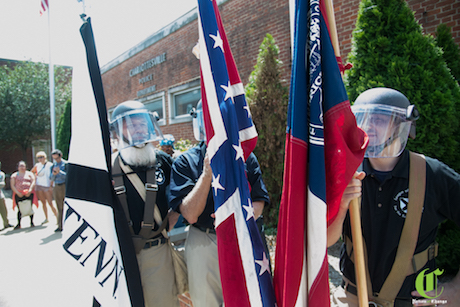 De’Andre is still waiting for someone to contact him about the assault. Right after he started to receive help from an Antifa street medic, I walked around asking police officers if they wanted my info as I had evidence and witnessed a crime.
They just kept walking and didn’t respond. They also seemed uninterested that a man pulled a gun on me and De’Andre’s friends.
An hour or so later, the entire day would change. Potentially, America would change with it.
Five blocks away, another white man with associations to white supremacist groups rammed his car into a peaceful march, murdering one and injuring many others.
De’Andre Harris received staples in his head, stitches just above his eye, a broken wrist and a chipped tooth. His story, while not reaching the major networks, went viral.
My images posted on twitter and some other videos caught the eyes of millions, and his gofundme page reached over $100k. My guess is that he won’t have a lot left over after he pays his medical bills.
But at least he’s alive – and doing as much press as he can, getting the word out that the civil rights era of the 60s never should have gone away. Because the beatings haven’t. 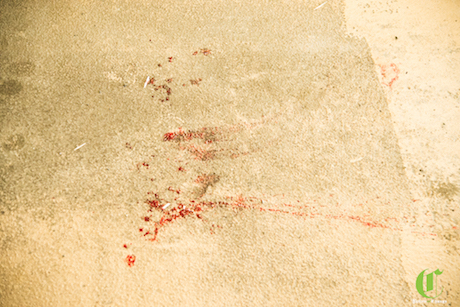 Before turning to journalism as an investigative reporter for The Guardian and BBC Television, Greg Palast was an investigator of fraud and racketeering for governments and labor unions worldwide. His investigations have appeared in Rolling Stone, Harper’s and New Statesman. Known as the reporter who exposed how Katherine Harris and Jeb Bush purged thousands of Black voters from Florida rolls to steal the 2000 election for George Bush. Palast has written four New York Times bestsellers, including Armed Madhouse, Billionaires & Ballot Bandits, and The Best Democracy Money Can Buy, now a non-fiction movie.
Stay informed, get the signed DVD, a signed copy of the companion book – or better still, get the Book & DVD combo.
Visit the Palast Investigative Fund store or simply make a tax-deductible contribution to keep our work alive! Alternatively, become a monthly contributor and automatically receive Palast’s new films and books when they’re released!
Or support the The Palast Investigative Fund (a project of The Sustainable Markets Foundation) by shopping with Amazon Smile. AmazonSmile will donate 0.5% of your purchases to the Palast Fund and you get a tax-deduction! More info.
Subscribe to Palast’s Newsletter. Follow Palast on Facebook and Twitter.
GregPalast.com