Days before the midterm elections, Americans concerned about alleged voter suppression efforts in Georgia and other states will get the chance to see a documentary that puts the issue into sharp relief.

“We’re having a national impact showing. This was at the specific request of Rev. Jesse Jackson,” Palast tells Deadline, “and LaTosha Brown of Black Voters Matter, who said, ‘Look, this is not just a Georgia film. We’ve got to get this out nationally.’” 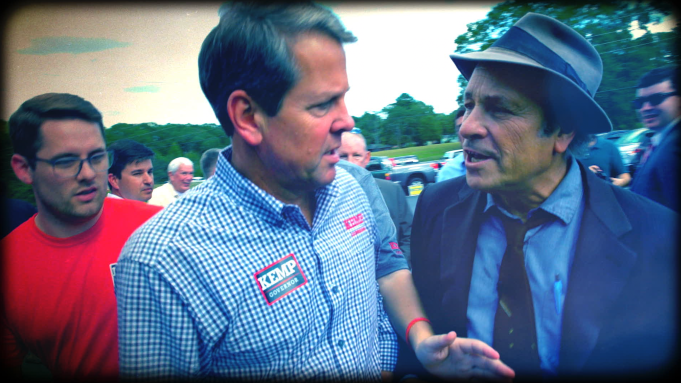 The “vigilante/hitman” of the film’s title refers to Brian Kemp, the incumbent Republican governor of Georgia who is running for re-election this year, in a rematch with Democrat Stacey Abrams. In 2018 Kemp ran for governor while serving as Georgia’s sitting secretary of state, meaning he oversaw his own election. In the years leading up to the contest his office purged a massive number of voters from the rolls with the clear intent — his opponent’s say — of disqualifying voters more likely to favor Abrams than Kemp.

“Even by Georgia standards, the voter purge of late July 2017 was remarkable,” reported American Public Media in 2018, an investigative news organization that describes itself as nonpartisan and independent. “In a single day, more than half a million people — 8 percent of Georgia’s registered voters — were cut from the voter rolls. Republican Secretary of State Brian Kemp… oversaw the removals eight months after he’d declared himself a candidate for governor.

“The purge was noteworthy for another reason: For an estimated 107,000 of those people, their removal from the voter rolls was triggered not because they moved or died or went to prison, but rather because they had decided not to vote in prior elections.”

Kemp was just getting started, the documentary asserts. Following Democratic presidential nominee Joe Biden’s victory in Georgia in 2020, and the victory by two Democrats (Jon Ossoff and Rev. Raphael Warnock) in U.S. Senate runoff elections in early 2021, Georgia Republicans pushed through a measure to create further obstacles to voting. Gov. Kemp signed into law Senate Bill 202, a thick piece of legislation, in March 2021.

“It’s 98 pages of impediments,” Palast insists. “And that’s a problem.”

The law barred Fulton County — which has a majority African American population — from using “two mobile voting buses the county purchased last year to help with long lines” at polls, according to Georgia Public Media. The legislation also mandated “secure” absentee ballot drop boxes, moving “them inside early voting sites instead of outside on government property,” GPM reported. “Additionally, the drop boxes will only be accessible during early voting days and hours instead of 24/7.”

Palast says, “Some of the key things [in SB 202] are making it much harder to use drop boxes. That makes it a lot more inconvenient. It means the lines [at polls] are going to be a lot longer.”

As has been widely reported, the law also made it illegal for a non-poll worker to give water or sustenance to anyone waiting to cast a ballot. As Palast puts it, “You can’t give someone a slice of pizza or a cup of water while they’re waiting five hours in line.”

SB 202 also granted individual voters the authority to challenge other voters. As the Atlanta Journal-Constitution reported in July, “…A determined group of Republicans is asking local elections boards to cancel thousands of Georgia voter registrations, using a new power bestowed by the state’s voting law.” 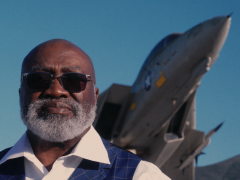 In Vigilante, Palast interviews Gamaliel Turner, a major in the U.S. Army with a legal residence near Ft. Benning, Georgia, whose ballot “was personally challenged by the county Chairman of the Republican Party.” The major is brought almost to tears recounting what it meant to him, as an African American, to be denied access to the polls on the false pretense that he wasn’t living at the address listed on his voter registration.

Palast says it took a diligent effort to find wrongly disenfranchised voters willing to speak about their experience.

“We literally, probably for this film, made 2,000 phone calls. People don’t want to go on camera,” he says. “It’s very difficult. You can be harassed. The one valuable thing about [Maj. Turner] is that he comes from this civil rights family which has been out front, in front of cameras. In other words, they know how to do this and they know the importance of doing it.” 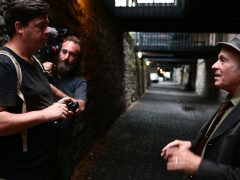 Ambrose, the director, says it was vital to put a human face on the issue.

“We knew we needed this sort of personal interest story. We talk about voter suppression — it’s often a number on the screen or a photo of a long line [of voters],” Ambrose observes. “One of the things that we try to do is show the people who are the victims and the impact it has on their lives, physical and psychological. And we knew we needed to start the film off with this investigation into who was really impacted by these vigilante laws.”

Georgia Republicans have defended SB 202 as “necessary to restore confidence in the state’s election system,” as Atlanta Fox5 TV station phrased it. Gov. Kemp has defended the law as well, insisting it does not impose undue burdens on voters.

Kemp noted it mandates counties that didn’t have a voter drop box previously to get one. And as for the provision prohibiting volunteers from feeding people stuck in long voting lines, he said those voters can order food and drink for themselves if they wish, “But we’re not going to let candidates or third-party groups that have an agenda electioneer people while they’re in line within 150 feet from the polling location or 25 feet at the end of the line.”

That may sound reasonable, but the film argues Kemp is, in fact, “a pioneer of present-day voter suppression,” as Josie Duffy Rice, a journalist with the nonprofit news site The Appeal, described him in a 2018 New York Times op-ed. Vigilante characterizes Kemp as a worthy inheritor of efforts to disenfranchise Black voters in Georgia for over a century. The Georgia Historical Quarterly wrote of but one example of that long history from a primary election in July 1946 when “a widespread campaign was launched to challenge and disqualify from voting many thousands of blacks.” That campaign involved purges of voter rolls and “other devices to thwart” Black participation in elections.

“The film is showing that nothing is really new,” Ambrose argues. “What is happening now is rooted in racist tactics from the past 50 years, from a hundred years ago.”

The Palast Investigative Fund have made Vigilante: Georgia’s Voter Suppression Hitman available as a FREE stream in the run-up to the midterm elections. 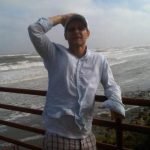 Matthew Carey joined Deadline fulltime in 2020, after a long association as a freelancer, to specialize in coverage of the nonfiction film landscape. Matthew is a writer and producer whose work has appeared on CNN, CNN International and CNN en Español. He has written extensively about documentary film for CNN and CNN.com, Documentary magazine, NBCNews.com and TheWrap.

Join us this morning with my friend @RevDrBarber for the Moral Call to Vote in Columbus, Ga. #NAACP #justicefighter

Join us today for our Souls to the Polls rally! Special guests @RevDrBarber @yannasoulsings @Dee1music and many more! Today is the first snd only Sunday for early voting in the U.S. senate race! Let’s make history Georgia. @BlackVotersMtr #WeWontBlackDown 👊🏾❤️🙏🏾🙏🏾🙏🏾