Two new court decisions have blessed mass purges of voters in two swing states, Georgia and Wisconsin. This could be the launch of a new system for purging masses of voters of color and young voters that is expected to spread to 20 or more states before the Presidential election. 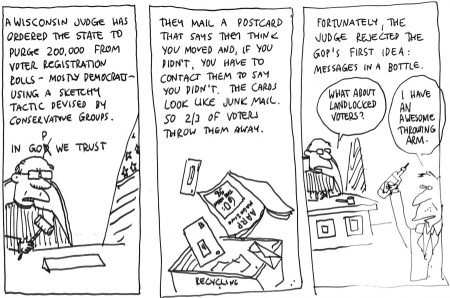 In Atlanta on Friday, Federal Judge Steve Jones ruled against Stacey Abrams’ organization Fair Fight in its suit to immediately restore nearly 100,000 Georgians to the voter rolls. It turns out that Abrams’ attorneys were not in a fair fight against this federal judge who refused to even consider if the purge would cause “irreparable harm.”

Georgia’s Secretary of State, Brad Ratffensperger, was using a method of vote suppression, “Purge by Postcard,” created by the Trump’s “vote fraud” advisor, Kris Kobach of Kansas. Under the guise of “voter list maintenance,” Georgia sent out postcards, designed by Kobach, that look like cheap junk mail. When a voter fails to return the card, they lose their vote.

Yes, the cancelled voter can re-register. But, as we have uncovered in our film, The Best Democracy Money Can Buy, most people won’t know they were pulled from the list until it’s too late.

Judge Jones made the decision not to restore the Georgians to the voter rolls, calling on Fair Fight to bring its case in state court where GOP appointed judges predominate. Judge Jones did, however, express concern that the state take “additional diligent and reasonable efforts (through notices on the Secretary of State’s website and press releases) to inform the general public.”

It’s ludicrous for the judge to say the problem is solved by sticking this attack on voting rights on a website; as if every Georgian daily checks the website of the Secretary of State.

The Court also ruled that Fair Fight did not do enough to prove that the postcard purge was unconstitutional and unfair. However, Judge Stevens did not give Fair Fight a chance to present testimony from Palast Fund experts that the purge list was almost entirely erroneous and biased against low-income and younger voters.

The Palast Investigative Fund has given Abrams’ Fair Fight the files from our six-year investigation of racist voter purges in Georgia including a list of 340,134 Georgians whom the prior Secretary of State, now-Governor Brian Kemp, wrongly removed from the voter rolls. Abrams’ non-partisan voting rights group has retained the Palast team experts to update the list—and have discovered tens of thousands more wrongly purged. But the judge refused to take the evidence.

In an ominous note, Judge Jones cited Supreme Court Justice Antonin Scalia’s opinion in Crawford v. Marion Cty. Election Bd., in which the Court allowed Indiana to force voters to obtain photo voter ID if they did not have a current drivers’ license.

The now-deceased Justice ruled that “Ordinary and widespread burdens, such as those requiring nominal effort of everyone, are not severe.” Lawyers representing the low-income plaintiffs complained that the average county office where the ID could be obtained was 17 miles from the typical resident, a major burden for the poor. But Scalia ruled that, “Seventeen miles is seventeen miles for the rich and the poor.”

Maybe 17 miles was no burden for Scalia. The Judge, we discovered, drove a BMW in which he (or his chauffeur) could cover 17 miles in a few air-conditioned minutes. However, the plaintiffs noted that those seeking the voter ID did not have drivers licenses, which is why they needed non-driver ID. For non-drivers—Black, poor, students—the average trip required three busses in each direction and a full day off from work or school. 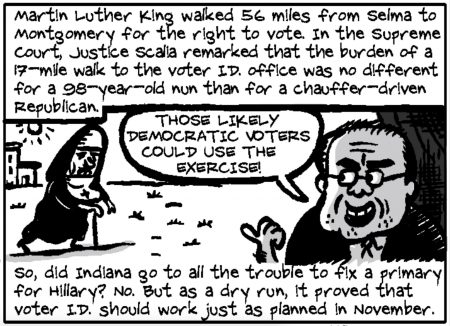 Fair Fight CEO Lauren Groh-Wargo said. “We are exploring additional legal options to compel the Secretary of State to follow House Bill 316,” passed this year after the scandal of mass, wrongful purges of half a million Georgians before the November 2018 gubernatorial election.

The Court also noted that “in light of the immediacy of the situation,” it is within the authority of the Secretary of State to return any cancelled voters. The likelihood of the Republican Secretary of State returning these voters to the rolls is nonexistent.

The Palast Fund experts will testify in another federal suit brought by Fair Fight seeking to overturn the Georgia law that authorized the purge-by-postcard operation.

Wisconsin ordered to Purge
The Georgia ruling comes on the heels of a devastating ruling by a Wisconsin court which, for the first time ever, orders a state to purge voters when the state itself has declared the purge list faulty.

On December 13, Wisconsin Ozaukee County judge Paul Malloy ordered the state elections board to removed 234,000 from the rolls on the petition of a right-wing group, Wisconsin Institute for Law & Liberty, despite the board determining that the purge would remove legal voters.

And Wisconsin lists are more than faulty: our expert review of the method used by Wisconsin, same as Georgia’s “purge by postcard,” is no less than than 70% wrong—and especially biased against voters who move within a county, i.e. disproportionately young, poor, Black and Hispanic voters.

Palast Fund spoke with Bob Brandon, founder of the Fair Elections Center in Washington DC who is working with the League of Women Voters to overturn the ruling. Brandon was hopeful a federal court would intervene as the state had already sent out postcards to tell voters their rights were safe, they need not re-register if they had not moved — or provide proof of their change of address on the day of voting. By the state court ruling, voters told they need not re-register will, in fact, have been purged from the rolls.

“We think we can win on the issue of notice,” Brandon said, hoping this thin thread will prevent the loss of a quarter million registrations. Donald Trump won Wisconsin by just 29,000 votes in 2016.

While the state estimates the list is substantially wrong, The Palast Fund is preparing to review the Wisconsin purge list name by name to prove what we have seen in other states—that the lists are almost entirely false, wrongly eliminating voters for moving from the state who are in fact still in their Wisconsin homes.

We spoke with the nation’s most-respected voting rights attorney, Barbara Arnwine of the Transformative Justice Coalition, Washington, who said, “This is a national problem, but it seems no one is getting it…the purges are reaching into the millions.”

As previously announced, the Palast Investigative Fund experts have been retained by Stacey Abrams’ Fair Fight to challenge mass purges in Georgia. But with the purge-by-postcard operation moving into an estimated 20 states, we need to perform the same investigation and expert dive into each state’s purge list.

And while we have terrific pro-bono help, this requires funding we don’t yet have. I want to truly thank those who recently made a tax-deductible contribution to the 2020 Investigation. This should allow us to dig into Wisconsin. But that leaves a whole lot of America exposed to racist purge-mania. Moreover, we need to get our team back on the ground in Wisconsin, Michigan, Florida, North Carolina so we can document and film our investigation which our excellent media partner, The Guardian USA, will carry.

So, I’m asking, as 2019 turns into Battlefield 2020, will you help us to take on every purge-poisoned state?