How Trump Stole 2020
The Hunt for America's Vanished Voters

If you’re not sick and outraged and ready to vomit, then don’t talk to me.

When I see a cruel bucket of garbage and winky-winky racism and bullshit and venom like Mike Pence, fawning to an orange-stained bloviating bigot, then talk to America like he’s some kind of Boy Scout, I want a gun, or a TV network where I can tell the truth or a giant washing machine to dunk America and rinse off the crud of lies and pure manipulative evil that they’re feeding us. 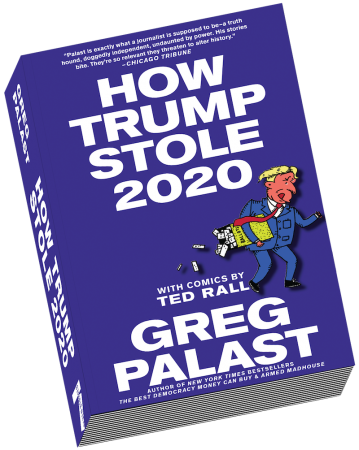 But I don’t like guns, I don’t have a TV network, I just have this: A book.

It’s called How Trump Stole 2020: The Hunt for America’s Vanished Voters.
It’s the most important bullet I’ve ever fired.

I watch these smug jerks and I’m ill … because I know something they won’t tell you. And here’s the facts, ma’am:

Does it matter? In Detroit, 75,355 ballots were never counted because of 87 broken scanning machines. And Trump supposedly won Michigan by 10,700 votes — really?

And, no fewer than 1,982,071 legal voters were denied the right to vote. Told to get the hell out of the polling station. Can you guess their color?

So God Bless America. By the way, these numbers are from the raw data supplied to me by the US Elections Assistance Commission.

So: Trump wasn’t elected by voters but by voter-vanishing trickery.
It’s official. It’s in your face. It’s sick. It’s unreported.

I cry. I scream. I retch. Then I make jokes—so I don’t burst into tears.

The 2020 election has not been stolen from Joe Biden — it’s been stolen from you. From We the People who march to the polls believing America is still a democracy, the land of the Brave, home of The Free, and that our votes count.

But we can bust this ballot burglary, un-steal the election. 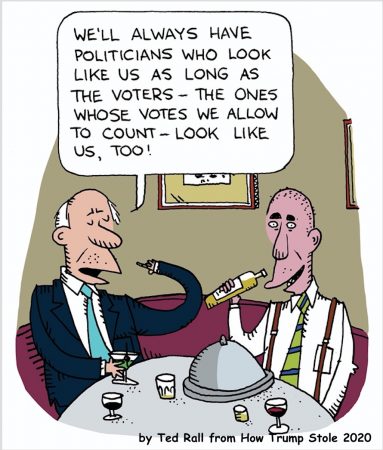 America is on the line. ON THE LINE. I have two kids and God forbid if I stand here silent with my hands in my pockets whistling at my shoes.

Trump isn’t a billionaire: he just plays one on TV. He’s only a glove puppet…I’ll give you the names of the billionaires whose fingers are in the glove. And what they’re grabbing.

So I want, I demand, I insist, that you order a copy of the exposé How Trump Stole 2020.
And inside it, there’s a 48-page comic book by Ted Rall. Because every cartoon is worth a thousand bullets.

You want to know who owns your ballot?  Then get the book right now by ordering it on Amazon or Barnes & Noble or Bookshop.  Or go and pound the counter at your local bookstore and tell them that instead of another Yoga Diet Cookbook you want a HAND GRENADE MADE OUT OF TRUTH:
How Trump Stole 2020.

Alternatively: make a donation and get a signed copy.

[Whichever way you choose to get it, your dollar goes to support the Palast Investigative Fund. I am donating all my proceeds to the fund.]

Can a book make a difference?  Can’t say. But I know this:  Ballot bandits are cowards, are cockroaches.  When we turn on the lights, they run run run away.

Do this now.  Get the info ammo and pass it on to your friends and mailing lists.

And for my terrible language, I apologize.

For media request and review copies reply to this.