How to Stop The Purge from Stealing the Georgia Runoff
— and Swiping the U.S.Senate!

The Republicans are panicked. Despite wrongly purging nearly 200,000 mostly young, low-income, and voters of color in an attempt to fix the election (as exposed by us), Georgia Republicans like Brian Kemp and Brad Raffensperger lost the state for Trump, and now they could lose control of the US Senate in the upcoming January 5 runoffs between Sen. David Perdue (R) and Jon Ossoff (D), and Sen. Kelly Loeffler (R) and Rev. Raphael Warnock (D).

But the GOP’s crushing in Georgia was not a miracle nor did it just surf in on a Blue Wave.

I’ve been investigating Georgia for seven tough years, ever since Martin Luther King III told me, in Atlanta, “Greg, Georgia is a Blue state…if they’d let us vote.”

Honestly, it’s not my job to turn Georgia blue, green or orange. Our sole focus is to expose vote suppression trickery by either political party. But the math is clear: if you illegally remove voters of color and low-income voters, the Democratic vote will increase when the crime is busted.

So what happened on Tuesday in Georgia? I know this: The ACLU issued our report, ‘Georgia Voter Purge Errors’, which garnered nationwide attention, and we made the Georgia purge list public, so people could easily find out if they’d been purged and re-register in time to vote. Then Black Voters Matter took our report and sent 98,000 postcards to wrongly purged voters to warn them to re-register.

And we didn’t just start in this election year. We worked on getting out the word on Georgia’s Jim Crow election games in press briefings sponsored by the Southern Christian Leadership Conference and the NAACP. We partnered with Helen Butler of the Georgia Coalition for the Peoples Agenda and successfully sued Brian Kemp and his successor as Secretary of State. And, before the 2018 midterm election, we first showed Stacey Abrams the secret purge list used by Brian Kemp to whitewash the voter rolls.

And good old investigative reporting. I’ve only been digging into the Georgia vote cesspool for seven years — in other states I have put in decades — and the King family has been at it for generations.

And thanks to a little help from celebrities like Leonardo DiCaprio, we also had a huge response to our Purged videos narrated by Yvette Nicole Brown and Debra Messing, which reached many millions — and directed the voters of Georgia, Michigan, Wisconsin and North Carolina to our re-registration website, SaveMyVote2020.org. Maybe that’s one reason that this time, the President was chosen by the voters, not the purge.

But the next two months require the same massive effort and more. This is not partisanship — it’s citizenship. 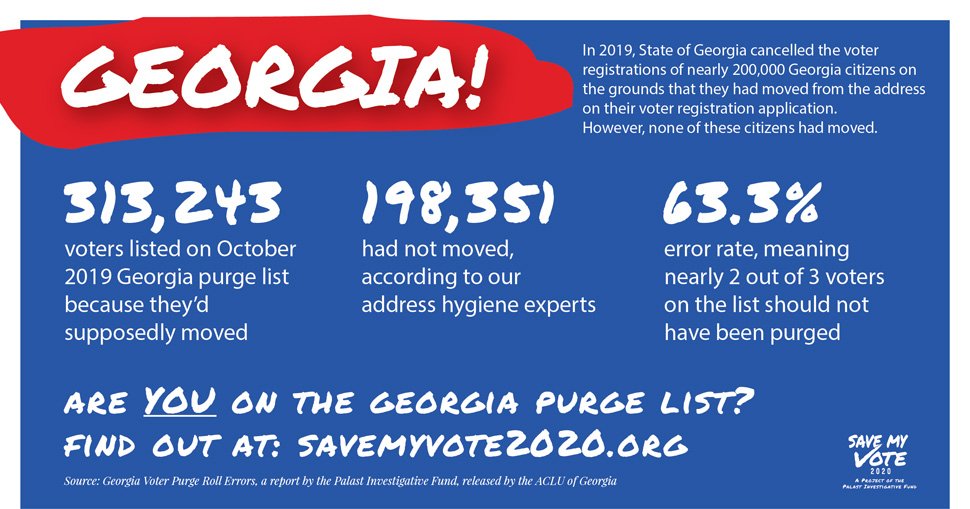 This Sunday, I’ve been working with our team of 15, including experts, lawyers and crew already in or on their way to Georgia to cover the runoffs and investigate the new tricks we can’t yet imagine.

It’s not just The Purge. During our investigation for Democracy Now! on the 2017 Congressional race between Jon Ossoff and Republican Karen Handel, we discovered other, cruder tricks: shifting voting stations from Black to White neighborhoods. For Rolling Stone and Al Jazeera, we discovered the state had threatened, and effectively shut down, a Korean-American voter registration drive. And, yes, with Stacey Abrams’ help, we discovered that the state simply refused to add newly registered young voters to the rolls.

And along the way, we had to file suits, get insiders to pass us the incriminating information, create websites to inform voters, attend a Trump rally or two and even get busted by Georgia Smokeys for trying to ask now-Gov. Brian Kemp about his purge operations. (Let me not over-dramatize: It was a quick catch-and-release to prevent embarrassing questions while cameras rolled.)

The changing of the political order does not ride in on a wave. It takes years of work — and the next two months will be the capstone.

But this is a truly non-partisan effort. (And Lord knows, the Democratic Party is not happy when I turn my attention to their own shenanigans.) Indeed, I not only gave our information to the ACLU and Black Voters Matter, we also offered our entire file to Secretary of State Raffensperger.

Republican or Democratic, our government should be concerned about wrongly taking away any American’s sacred right to vote.

My foundation even offered to pay the cost of correcting the state’s lists. So far, the response has been a series of gross prevarications and nasty ad hominem attacks. I can live with that.

We did not plan for this post-election election. But the War on Voting is now about to get nastier — and we have the unique skills to expose the attacks.

I’m asking you to help with a donation of any amount.

A $100 tax-deductible donation will get you a supporter screen credit in our upcoming film.

Candidates of all parties will drown in donations for this run-off. But there’s no sense winning over voters — whose right to vote has vanished.