by Greg Palast for Workingforchange.com
[Tuesday, October 10th 2006] How did a berserker like North Korea’s Kim Jong Il get the bomb in the first place? Answer: He bought it from the Dr. Strangelove of Pakistan in 2001 — while all our President’s men ordered our intelligence agents to keep their eyes shut tight.
On November 9, 2001, BBC Television Centre in London received a call from a phone booth just outside Washington. The call to our Newsnight team was part of a complex prearranged dance coordinated with the National Security News Service, a conduit for unhappy spooks at the CIA and FBI to unburden themselves of disturbing information and documents. The top-level U.S. intelligence agent on the line had much to be unhappy and disturbed about: a “back-off” directive.
[CLICK HERE FOR AUDIO OF PALAST AND AMY GOODMAN READING ‘THE BACK-OFF’ DIRECTIVE FROM ARMED MADHOUSE]

This call to BBC came two months after the attack on the Pentagon and World Trade Towers. His fellow agents, he said, were now released to hunt bad guys. That was good news. The bad news was that, before September 11, in those weeks just after George W. Bush took office, CIA and Defense Intelligence Agency (DIA) personnel were told to “back off” certain targets of investigations begun by Bill Clinton. He said there were particular investigations that were effectively killed.
Which particular investigations? The agent was willing to risk his job to get this story out, but we had to press repeatedly for specifics on the directive to “back off.” The order, he said reluctantly, spiked at least one fateful operation. As he talked, I wrote in my notebook, “Killed off Conn. Labs investigation.” Connecticut Laboratories? I was clueless until my producer Meirion Jones, a weapons expert, gave me that “you idiot” look and said, “Khan Labs! Pakistan. The bomb.” Dr. A. Q. Khan is known as the “Father” of Pakistan’s atomic bomb.
He’s not, however, the ideal parent. To raise the cash for Pakistan’s program (and to pocket a tidy sum for himself), Khan sold off copies of his baby, his bomb, to Libya and North Korea””blueprints, material and all the fixings to blow this planet to Kingdom Come.
From another source inside the lab itself, we learned that Dr. Khan was persuading Pakistan to test his bomb””on India.
Why would Team Bush pull back our agents from nabbing North Korea’s bomb connection? The answer in two words: Saudi Arabia.
The agent on the line said, “There were always constraints on investigating the Saudis.” Khan is Pakistani, not Saudi, but, nevertheless, the investigation led back to Saudi Arabia. There was no way that the Dr. Strangelove of Pakistan could have found the billions to cook up his nukes within the budget of his poor nation.

We eventually discovered that agents knew the Saudis, who had secretly funded Saddam’s nuclear weapons ambitions in the eighties, apparently moved their bomb-for-Islam money from Iraq to Dr. Khan’s lab in Pakistan after Saddam invaded Kuwait in 1990.
But, said the insider, our agents had to let a hot trail grow cold because he and others “were told to back off the Saudis.” If you can’t follow the money, you can’t investigate. The weapons hunt was spiked.
BBC got the call about Dr. Khan’s bomb in November 2001 and reported it that night on the tube and in the London Guardian. Over two years later, on February 11, 2004, President Bush, at an emergency press briefing, expressed his shock – shock! – at having learned that Dr. A. Q. Khan of Pakistan was running a flea market in fissionable material.
Our report on Dr. Khan’s nuclear bazaar was confirmed in 2004, not by U.S. intelligence, but by one of Khan’s customers, Muammar Gaddafi, the mischievous tyrant of Libya. It was Gaddafi’s last little bit of fun with Mr. Bush and Britain’s Prime Minister, Tony Blair. The U.S. and Britain had agreed to end their trade embargo on Libya in return for Gaddafi’s shutting down his bomb program and, not incidentally, Gaddafi’s giving an exclusive oil drilling agreement to British Petroleum.
So with Libya giving up Dr. Khan’s bomb, it appeared we had a happy ending for the safety of the planet. Unfortunately, while our President was holding hands with Saudi King Abdullah at the Crawford Ranch and kissing Pakistan’s dictator Pervez Musharraf on both cheeks, Khan had given the secret of the bomb, hardware included, to
Kim of North Korea, a despot in a leisure suit a little less stable than Charles Manson. 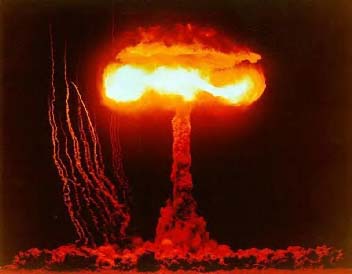 The U.S. government missed discovering Dr. Khan’s radioactive fire sale because our agents were hard at work ignoring the Saudi money trail. If the agencies had not been told to “back off” the Saudis and Dr. Khan, would the U.S. have uncovered the nuclear shipments in time to stop them? We can’t possibly know, but, to paraphrase Yogi Berra, it’s amazing what you don’t see when you’re told not to look.
Now, in 2006, comes what the spook-world calls, “blow-back,” the ugly consequences of playing hide-and-don’t-seek with the Saudis five years ago. Kim has finally decided to unwrap his gift from Pakistan — and our President is, once again, in that toxic mood we all know so well: both befuddled and belligerent.
Well, I suppose George can do what he usually does in a crisis: offer Kim a big fat tax cut.