How Do You Steal a Dream?Supreme Court hears suit to kill Voting Rights Act

How Do You Steal a Dream?
Supreme Court hears suit to kill Voting Rights Act

Jim Crow is alive and well – and he has mounted a new attack on the law Martin Luther King dreamed of: the Voting Rights Act.
Today, February 27, the Supreme Court will hear a suit brought by Shelby County, Alabama, which challenges the right of the Department of Justice to review changes in voting procedure. Example: Attempts to cut the number of early voting days, to expunge “illegal alien” voters without any evidence, refusing Spanish-language ballots, have been blocked by the Department of Justice and courts because they have stopped Black and Hispanic citizens casting ballots.
Sixteen states are subject to this “pre-clearance” law, every one with a history of Jim Crow rules such as “literacy” tests – Blacks had to recite the Constitution, Whites “Mary Had a Little Lamb.”
Dixie moans it’s been picked on unfairly, but the “pre-clearance” states, chosen by an arithmetic formula, include all or parts of the “Confederate states” of California, Arizona, Alaska and New York. 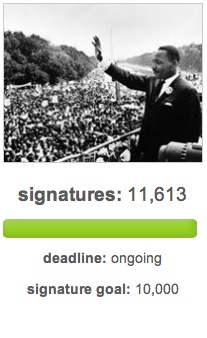 All those above the Mason-Dixon line are on the civil-rights hot-water roster because of a history of hostility to Hispanic citizens. In 2006, for example, the Republican Secretary of State of California rejected 42% of voter registration forms because the names were “unusual” and difficult to type into records! The names, like Chavez and Muhammad, were only “unusual” for Republicans.
New York’s mayor Michael Bloomberg is happy to pre-clear his city’s changes with the Justice Department and has told that to the Court. But once again, as Dr. King said in his Dream speech, in Alabama, the “Governor has his lips dripping with the words of interposition and nullification” – to nullify the 15th Amendment’s right to vote and to interpose himself between federal law and the enforcement of this basic American right.
And the Southland? In 2000, Florida Secretary of State Katherine Harris purged tens of thousands of African-Americans from voter rolls, labeling them “felons” when their only crime was VWB: Voting While Black. All – every one – were innocent. And again, in 2012, Florida Governor Rick Scott targeted 180,000 voters, mostly Latinos, as illegal “alien” voters. The Governor, when challenged by the Justice Department, cut the “alien” list to 198 but in the end, could only produce evidence against one.
If it were not for Section 5, the pre-clearance law, the purges, gerrymandering and other racially bent trickery rampant in Florida, Arizona (with its profiling and harassment of Hispanic voters) and Alaska with its bias against Native Americans would be so much worse. Without review – and the threat of review – Americans would once again lose the rights that the Constitution promises, won with the blood of our Fathers.
At the same time, we cannot ignore the Jim Crow and Jose Crow tactics that create long lines of voters of color in Ohio and other states. 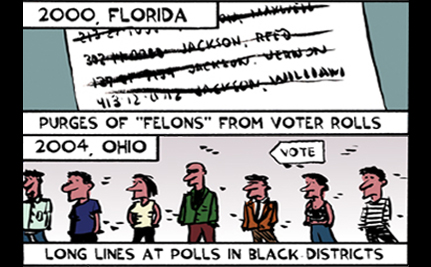 Presidents Gerald Ford and Ronald Reagan signed massive expansions of the Voting Rights Act, tripling its reach. It is time to extend the law’s protections again – to Ohio, to Wisconsin, to everyone.
When every American is protected by the Voting Rights Act review of voting changes, then all of us may be secure that our votes will not be nullified by politicians abusing the voting system to seize office through tactics racist in effect, if not intent.
A half century ago this year, Dr. Martin Luther King shared his dream with America:
“I have a dream that one day this nation will rise up and live out the true meaning of its creed: We hold these truths to be self-evident: that all men are created equal.”
“We can never be satisfied as long as a Negro in Mississippi cannot vote and a Negro in New York believes he has nothing for which to vote. No, no, we are not satisfied, and we will not be satisfied until justice rolls down like waters and righteousness like a mighty stream.”
King’s dream is the American Dream — which no Court should take away. It is a mighty stream which must touch all citizens in every state.
Without “pre-clearance,” the Voting Rights Act is an empty promise – with purged, blocked and intimidated voters having to protest after an election to the very officials elected by the vote thievery that put them in office.
If this Supreme Court removes “pre-clearance” Section 5 on the grounds that it does not apply to every state, then the solution is simple and just: apply pre-clearance to every state.
Every American deserves a review by Justice of laws which tell us who can vote – and who can’t.
As King admonished us, we must not be satisfied when we see Black folk, a half century after the passage of the Voting Rights Act, stand in line for six hours to vote whether in Miami or in Cleveland.
We petition the Court and Congress to let freedom ring.
Sign the petition to Defend Martin Luther King’s Dream Act – here.
Joining Palast as initial co-signers of the petition are Dr. Charles Steele, Jr., CEO, Southern Christian Leadership Conference, who succeeded Dr. King as President of SCLC and one of the original Freedom Riders, Dr. Bernard Lafayette, Jr.,  co-founder, Student Nonviolent Coordinating Committee.
Watch the film, sign the petition and pass this note on.
Greg Palast has investigated the suppression of the African-American vote in America for BBC Television, The Nation and, with his co-author, Robert F. Kennedy Jr., Rolling Stone. Palast is the author of the New York Times bestseller, with cartoonist Ted Rall, of Billionaires & Ballot Bandits: How to Steal an Election in 9 Easy Steps.
This work is supported by the not-for-profit Palast Investigative Fund. Please support our work in investigation of racial voter suppression with a tax deductible donation to the Fund.