Obama Can End Argentina's Debt Crisis with a Pen
The President has the Constitutional power to pluck vulture-fund billionaire Paul Singer.

The “vulture” financier now threatening to devour Argentina can be stopped dead by a simple note to the courts from Barack Obama. But the president, while officially supporting Argentina, has not done this one thing that could save Buenos Aires from default. 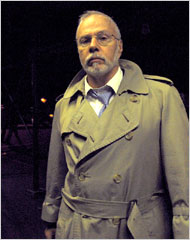 Obama could prevent vulture hedge-fund billionaire Paul Singer from collecting a single penny from Argentina by invoking the long-established authority granted presidents by the US constitution’s “Separation of Powers” clause. Under the principle known as “comity”, Obama only need inform US federal judge Thomas Griesa that Singer’s suit interferes with the president’s sole authority to conduct foreign policy. Case dismissed.
Indeed, President George W Bush invoked this power against the very same hedge fund now threatening Argentina. Bush blocked Singer’s seizure of Congo-Brazzaville’s US property, despite the fact that the hedge fund chief is one of the largest, and most influential, contributors to Republican candidates.
Notably, an appeals court warned this very judge, 30 years ago, to heed the directive of a president invoking his foreign policy powers. In the Singer case, the US state department did inform Judge Griesa that the Obama administration agreed with Argentina’s legal arguments; but the president never invoked the magical, vulture-stopping clause.
Obama’s devastating hesitation is no surprise. It repeats the president’s capitulation to Singer the last time they went mano a mano. It was 2009. Singer, through a brilliantly complex financial manoeuvre, took control of Delphi Automotive, the sole supplier of most of the auto parts needed by General Motors and Chrysler. Both auto firms were already in bankruptcy.
Singer and co-investors demanded the US Treasury pay them billions, including $350m (£200m) in cash immediately, or – as the Singer consortium threatened – “we’ll shut you down”. They would cut off GM’s parts. Literally.
GM and Chrysler, with no more than a couple of days’ worth of parts to hand, would have shut down, permanently forced into liquidation.
Obama’s negotiator, Treasury deputy Steven Rattner, called the vulture funds’ demand “extortion” – a characterisation of Singer repeated last week by Argentina President Cristina Fernandez de Kirchner.
But while Fernandez declared “I cannot as president submit the country to such extortion,” Obama submitted within days. Ultimately, the US Treasury quietly paid the Singer consortium a cool $12.9bn in cash and subsidies from the US Treasury’s auto bailout fund.
Singer responded to Obama’s largesse by quickly shutting down 25 of Delphi’s 29 US auto parts plants, shifting 25,000 jobs to Asia. Singer’s Elliott Management pocketed $1.29bn of which Singer personally garnered the lion’s share.
In the case of Argentina, Obama certainly has reason to act. The US State Department warned the judge that adopting Singer’s legal theories would imperil sovereign bailout agreements worldwide. Indeed, it is reported that, in 2012, Singer joined fellow billionaire vulture investor Kenneth Dart in shaking down the Greek government for a huge payout during the euro crisis by threatening to create a mass default of banks across Europe.
The financial press has turned on Singer. Commentators in the Wall Street Journal and FT are enraged at the financier’s quixotic re-interpretation of sovereign lending terms in the way that the Taliban interprets a peace agreement. No peace, no agreement.
Singer has certainly earned his vulture feathers. His attack on Congo-Brazzaville in effect snatched the value of the debt relief paid for by US and British taxpayers and, says Oxfam, undermined the nation’s ability to fight a cholera epidemic. (Singer’s spokesman responded that corruption in the Congo-Brazzaville government, not his lawsuits, have impoverished that nation.)
As if to burnish his tough-guy credentials, Singer has mounted legal attacks on JP Morgan Chase, Citibank, BNY Mellon, and UBS, demanding they pay him the money that Argentina had paid them over the last decade. Furthermore, Singer’s lawyers persuaded the judge to stop BNY Mellon, Argentina’s agent, from making $500m in payments to Argentinian bondholders.
Surely the president would intervene. He didn’t. He hasn’t. Why?
I’m not a psychologist. But this we know: since taking on Argentina, Singer has unlocked his billion-dollar bank account, becoming the biggest donor to New York Republican causes. He is a founder of Restore Our Future, a billionaire boys club, channelling the funds of Bill Koch and other Richie Rich-kid Republicans into a fearsome war-chest dedicated to vicious political attack ads.
And Singer recently gave $1m to Karl Rove’s Crossroads operation, another political attack machine.
In other words, there’s a price for crossing Singer. And, unlike the president of Argentina, Obama appears unwilling to pay it.
* * * * * *
Greg Palast is the author of the New York Times bestsellers Billionaires & Ballot Bandits, The Best Democracy Money Can Buy, Armed Madhouse and the highly acclaimed Vultures’ Picnic.
Get Palast latest film Vultures and Vote Rustlers featuring Paul “The Vulture” Singer.
HELP US FOLLOW THE MONEY. Visit the Palast Investigative Fund’s store or simply make a tax-deductible contribution to keep our work alive!
Subscribe to Palast’s Newsletter and podcasts.
Follow Palast on Facebook and Twitter.
www.GregPalast.com