There’s a fascinating history to what Joe Madison calls “James Crow, Esq., voting suppression” — and that history tells us what we can do to solve the problem of Republicans using the Help America Vote Act to block people from voting in largely Democratic areas.
It started with the 2000 election “debacle” in Florida.
The real debacle, of course, was the 5-4 decision of the Supreme Court that counting every vote in Florida would “cause irreparable harm to plaintiff George W. Bush,” so even though it was determined in late 2001 that Al Gore got more votes in Florida, Bush had already been installed in the White House.
But the debacle discussed in the media had to do with chads. After all the “hanging chad” folderol that year, Maryland Democratic Congressman Steny Hoyer reached out to Ohio Republican Congressman Bob Ney to collaboratively write legislation that would ensure that our elections could, after 200-plus years of mostly race-based “shenanigans,” actually make it easy and convenient for every eligible voter in America to both vote and have their vote counted. The result was the Help America Vote Act (HAVA) of 2002, aka HR 3295.
While the goal was noble, it hasn’t worked out as planned. Instead, the most pernicious actors in the GOP have found a way to completely reverse the intent — and defy the actual language — of that law, to make it much, much harder for people to vote and virtually guarantee that “some people” wouldn’t have their vote, even when cast, counted at all.
For example, in the last election, millions of people showed up at the polls (most famously in Georgia and Florida, but this was pervasive across red states) and were told that they weren’t on the voter list.
Although Secretaries of State purged an estimated 14 million people from the voting rolls in the 12 months leading up to the 2018 election, with virtually all of the questionable purges taking place in Republican-controlled states, HAVA requires that people who show up but are not listed on the voter rolls (almost always because they were purged) be given a “provisional ballot.”
The law specifies that people should be informed that the ballot may not be counted unless they can be verified as being filled out by a legitimate voter, and that it’s the responsibility of state election officials to do that verification in a timely manner so those votes can be counted.
“The main reason we did that,” former Congressman Bob Ney, the principal author of the bill, told me, “was because, particularly across the Deep South, people were simply being turned away at the polls. In most cases it was because they were Black, but in many cases it was also being done in districts where the opposition party controlled most of the election apparatus, typically Republicans turning away people in Democratic districts.”
“We wanted to make sure,” he added, “that every eligible voter had both a chance to vote and some level of certainty that his or her vote would be counted after they went to all the trouble of voting.”
Thus, the law explicitly requires voters whose names are not found on the current rolls be offered a provisional ballot, and requires voting officials to make an effort to verify the voter’s identity so their vote can be counted in a timely manner.
But, as BBC/Guardian/Rolling Stone/Salon/independent investigative reporter Greg Palast found when he accompanied Martin Luther King Jr.’s 92-year-old cousin, Christine Jordan, to the polls in Georgia, poll workers repeatedly refused to give her even a “provisional” ballot. Red shift has been known among both Democratic consultants and election integrity workers since it was first publicized widely after the elections of the early 2000s, and generally the finger of blame was pointed at either maliciously programmed or “faulty” voting machines (although if it was “faulty” machines, there should also be an equal amount of blue shift, which has never been documented in any consequential way).
While insecure, privatized, no-paper-trail voting machines like those used in Georgia may well play a role in red shift, it’s far more likely, given how aggressive Republicans have been about voter purges since the passage of HAVA, that voter purges are the main cause.
In June, the Roberts Supreme Court said, in a 5-4 decision involving Ohio, that Kemp and other GOP elections officials could use a voter skipping two elections as evidence the voter had moved away— and therefore could be purged from the rolls. The result: “Address hygiene” experts hired by Palast found no fewer than 340,134 Georgians wrongly purged for relocating when they’d never moved. This was repeated throughout the red states.
Thus, the biggest cause for exit poll anomalies is almost certainly purged voters who show up at the polls thinking they’re still on the rolls, voting a provisional ballot not knowing it won’t be counted, and then telling exit pollsters as they leave polling places that they voted for the Democrat.
The exit pollsters, thinking this was a “real voter who cast a real vote,” duly record it, and end up shocked when their polls don’t reflect “reality.”
This has become so problematic in the United States — uniquely among the world’s 36 Organization for Economic Cooperation and Development (OECD) advanced democracies — that since 2004, several polling companies have either gone out of business or quit the business of exit polls. The few remaining have shifted their focus from, “For whom did you vote?” to “What issues influenced your vote?”
Thomas Paine famously said, “The right of voting for representatives is the primary right by which other rights are protected. To take away this right is to reduce a man to slavery, for slavery consists in being subject to the will of another, and he that has not a vote in the election of representatives is in this case.”
It’s profoundly ironic that the descendants of slaves are the principal victims of this nationwide GOP effort. Legislation is needed immediately to criminalize such behavior on the part of state election officials.
This article was produced by the Independent Media Institute. 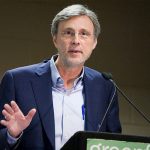 Thom Hartmann is a progressive national and internationally syndicated talkshow host whose shows are available in over a half-billion homes worldwide. He's the New York Times bestselling, 4-times Project Censored Award winning author of 24 books in print in 17 languages on five continents. Leonardo DiCaprio was inspired by Thom's book "The Last Hours of Ancient Sunlight" to make the movie "The 11th Hour" (in which Thom appears), and Warner Brothers is making a movie starring DiCaprio and Robert De Niro from the book Thom co-authored with Lamar Waldron, "Legacy of Secrecy."

Talkers Magazine named Thom Hartmann as the 8th most important talk show host in America in 2011, 2012, and 2013 (10th the two previous years), and for three of the past five years the #1 most important progressive host, in their “Heavy Hundred” ranking. His radio show is syndicated on for-profit radio stations nationwide by Westwood One, on non-profit and community stations nationwide by Pacifica, across the entire North American continent on SiriusXM Satellite radio (The Progress, Channel 127), on cable systems nationwide by Cable Radio Network (CRN), on its own YouTube channel, via Livestream on its own Livestream channel, via subscription podcasts, worldwide through the US Armed Forces Network, and through the Thom Hartmann App in the App Store. The radio show is also simulcast as TV in realtime into nearly 40 million US and Canadian homes by the Free Speech TV Network on Dish Network, DirectTV, and cable TV systems nationwide.

He was born and grew up in Michigan, and retains strong ties to the Midwest, although he and Louise have lived in New Hampshire, Vermont, Georgia, Germany, and Oregon...and now live with a small menagerie in Portland, Oregon.