By Jo (J.K.) Rowling as told to Greg Palast and the Palast twins
The Week [TheWeek.com 18 July 2011]
Some of you may recall that, years ago, when I lived in England, writing for The Guardian, when I shared the bestseller list with Jo Rowling (she at the pinnacle, me in the valley), we became buds through my twins’ love for her astonishing work.
But Jo knows that I found the conclusion of her series a sorry let-down, a second-rate “Show Down at the OK Corral” for Wizards.  In my opinion (and she does not at all agree), Jo was too distracted by a concern for how the ending would play on film.
I bugged her about it until she told me the “other” endings.  Every author has them – and we all look over our old drafts, after publication, and say, “Damn!  I should have used that version” – then we lock it away before someone sees it and agrees.
No, Jo wouldn’t show me typed copies, but she told me a couple of “I could have done this” endings.
One of them knocked me over, and I have to share it. (Sorry Jo, that’s the danger of befriending an investigative reporter – if you forget to use the magical words, “This is off the record.”)  I can understand, though, why she would put aside this quieter, yet far more harrowing, conclusion.
I wrote it down that night in October 2007.  I don’t claim that this is exactly word-for-word as she told it to me (Jo: please edit!) and I left out all the side stuff about me telling my oblivious kids, “You really should listen to this; years from now you’ll want to say you heard this,” and the minor mishap with my coffee.
But I just have to put it out here and hope that Jo and her publisher don’t slam me with an Avada Kedavra curse.
I’ll assume you’ve read the books – and if you haven’t, for shame! – so I won’t introduce this at all except to say that this alternative (and quite troubling) ending veers away from the printed and film versions just before Harry’s final confrontation with The Dark Lord, Voldemort.
And please:  If you want to say that I didn’t get her voice and story details exactly, keep in mind that I’m working from mental notes – and that I’m no J.K. Rowling.  But then, no one is.
To the Forbidden Forest
Harry marched toward the field where Voldemort waited with his pack of Dementors.  Harry’s scar burned brutally, saving him the pain of thinking too deeply about his decision, likely to bring him nothing but death.
What special evil, what deadly and devious spell had the Dark Lord prepared for Harry’s destruction? Voldemort had hunted after Harry for more than a decade; doubtless Voldemort would arm himself with a special curse far more powerful and final than the Avada Kedavra which had failed to kill Harry as a child.

Harry was terribly right.  The Dark Lord, in his clearing in the Forbidden Forest, was preparing a charm as devastating as Harry feared, and far more horrific. As Harry marched to this fated meeting, Voldemort passed his wand among the icy Dementors, commanding each to lay their Kiss upon it.
Voldemort, in those pained, lonely nights of his exile and recovery, had conceived of a way to hurl a Dementor’s kiss from his wand, the kiss that would take away the soul of its victim forever.  And now he would blast Harry with hundreds of them.  Voldemort’s reward would be greater than watching Harry’s burial.  He would have Harry frozen in place, Harry’s living being encased for eternity at the moment of Harry’s ultimate humiliation and defeat, a terrifying monument to Voldemort’s victory for all to see for all time. Voldemort’s joy rose with every Dementor’s kiss to his wand.
Harry could feel their grave-like cold as he approached and the pull of their despair.  It was hopeless, and he was helpless in the face of it.  And he knew it.
But then, Harry felt the presence of a young man and woman, though he could not see them.  These two ghosts lovingly held his body up and raised his spirit.  It was, he was certain, the last remaining life-force of his parents, making one last sacrifice by joining him on his final journey.  He allowed himself a moment of peaceful happiness, feeling them so close.
Then he stopped.  Harry shivered with a deep chill of recognition.  They were not his parents.  They were Voldemort’s: the young Tom Riddle and his bride who, for this occasion, had taken back her beautiful maid’s countenance. They said, using no words, “Our dearest son, we will not allow you to be harmed.”
Were their words for him?  Or for Voldemort?  Somehow, it didn’t seem to matter – they seemed so kind when he needed nothing more at this moment than a parent’s love.
Harry, and the two warm spirits becoming more visible, approached the edge of the swirling crowd of Voldemort’s followers, who parted, preparing to give the victim an easy corridor to his doom.
Voldemort’s wand had returned to his white, skeletal hand.  The Dark Lord pointed it confidently to where Harry would surely emerge from the crowd, not yet to destroy Potter but to hold him while he prepared to give Harry an oration on the eternal punishment about to strike him.
Voldemort laughed when Harry stumbled through.  But when the Dark Lord saw the specters of his parents, he howled as if cut in half.  With his furious heart in flames, Voldemort immediately unleashed the deadly Kisses, bellowing, “Oppugno Mortimbessios!” And all the vile terrors of the Dementors, in an unstoppable flash from his wand, rushed toward Harry and the spirits at his side.
It was only a hundredth of a second for Voldemort’s curse to reach Harry.  But somehow the world seemed to slow down, the Earth ceased to rotate; all on the planet held still, though Harry was aware he was free to move. Harry had planned every shield charm for his defense, but all now were clearly useless. Harry found himself unable to do more than calmly bend to one knee and bow his head, preparing to accept the force of the blow and his death and end.
As he kneeled, in that quiet moment outside time, the two shadows flew from him toward Voldemort.  And Voldemort changed.  The Dementors’ chill wind, and Time, moved backward; and there was Voldemort, growing to his younger, more potent, frightening self.
The curse struck Harry’s scar, obliterating it, then, in a loud roar, he felt the crushing pain of his skull opening, and then the shrieking curse rushing from his head – back toward the wand that sent it.
As the curse turned back toward him, Voldemort continued to grow younger still, until he was a little child again with his mother and father at his side.  When they realized the full force of Voldemort’s own spell was about to strike him, his parents put their reassuring arms around their son to protect him from this ultimate blow.
And then it struck.  And now the three entwined souls, Tom Riddle, his wife and young child, would remain forever entombed in that one moment, never able to leave.
And never wanting to.
Hogwarts AD 2130
The headmaster, his stringy white beard uncombed and his wrinkled, bald head topped by a drooping wizard’s cap, looked with wistful gratitude at the empty picture frame he’d convinced the Ministry to put up, despite their reluctance.  He knew he’d soon be residing in that little square etched with the name, “Harry Potter,” separated from Albus Dumbledore’s only by the portraits of Headmistresses McGonagall and Chang. 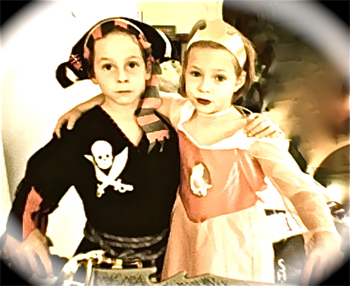 The old wizard could hear below the school abuzz with preparations for his 150th birthday.  He shifted Ginny, a bird of paradise, to a perch nearer his desk.  His wife, rather than grow old, had turned herself into this beautiful bird, but still insisted on giving un-birdlike advice.  “Harry, dearest, you can’t miss your own birthday party.  And it’s so lovely outside.”
Indeed, the summer day had brought out scores of picnickers who had come to set their baskets and blankets out near the warm light cast by the living statue of the happy family with the little child.  No one but the old headmaster knew who was encased in that glowing sphere.  When the Dementors were released from the spell of Voldemort, they, and indeed every wizard excepting Harry and the shade of Albus, were cleansed of all memory of the Dark Lord.  Now, after more than a century, curiosity about the family in the statue had long ago ceased.  Harry had simply ordered a plaque placed there.  It said only, “Riddles.”
“I will go,” he told his feathered wife, “but I have to keep an eye on the boy for a bit.”  Harry’s great, great grandson, not yet able to walk, silently played on the rug with his chocolate frog.  Then suddenly, in inexplicable anger, little Tom crushed the candy animal. Harry watched this, and knew the whole world would soon darken again for generations to come.
THE END
***
Investigative journalist Greg Palast’s reports can be seen on BBC Television Newsnight or at www.GregPalast.com.  Your thoughts on this other ending for the HP series welcome at the Greg Palast Facebook page. Palast’s new book, Vultures’ Picnic, will be published by Penguin USA in November 2011.
Subscribe to Palast’s Newsletter and podcasts.
Follow Palast on Facebook and Twitter.
GregPalast.com