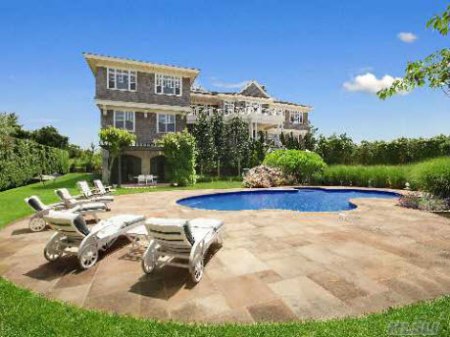 Don’t worry:  the bankers are safe.  The sub-prime sharks, derivatives divas, media mavens and their hairdressers, their trophy wives and their trophies’ personal trainers, the movers and shakers and money-makers, are all out of danger. Despite the warning that in a couple of days Hurricane Irene could well hit The Hamptons, the beach of the best of the ruling class will not lose a tan line.
I made sure they’re safe.  A couple decades ago, I worked on an emergency evacuation plan for the county of Suffolk, New York, home of the Hamptons.  It’s the wealthiest county in the United States.
The Hamptons’ hurricane plan is six volumes thick.  The police and the politicians, the fire department and the first responders have their copies, their orders, their equipment and they are ready to roll before a single fake-blonde curl is ruffled by untoward weather.
The last hurricane to hit Long Island, far fiercer than Katrina, took two lives, not 2,000.
But then, the Hamptons isn’t New Orleans, is it?
In 1992, a big storm washed into 190 houses on West Hampton Dunes, getting many grade-B film scripts very wet.  The federal government, with your tax dollars, rebuilt every single home on the beach (average value then, $2 million each) — and even rebuilt the beach with an endless samba line of trucks filled with sand, care of the Army Corps of Engineers.
There’s a photo of one, in case you’d like to move in.  (Shouldn’t we each get at least a weekend in the surf for our money?) 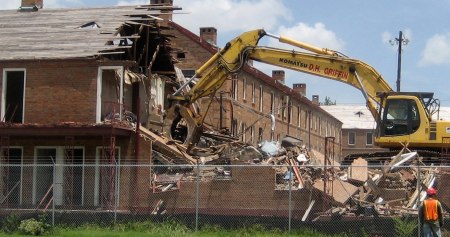 Now look at Patricia  Thomas’ home in the Lafitte Housing Project in New Orleans.  I met her a year after the city flooded; she and her cousin and her cousin’s two kids, just off the bus from refugee centers in Texas, were told that if they returned to their homes, they would be arrested.  It’s been six years and they still are not allowed back in.  Doesn’t matter:  three years ago, their houses were torn down to make way for yuppie condos, for the nouvelle carpetbaggers who will enjoy Lafitte’s locale near the French Quarter.
Last year, a judge ruled that the Army Corps of Engineers and the federal government were completely responsible for the flooding of Lafitte and half the city.  [See the film ‘Big Easy to Big Empty.’  This week, the Palast Investigative Fund is providing the half-hour film without charge. Click here to download it.]
Under the Constitution, the President and Congress must authorize payment to flood victims, as they did for the Westhampton luvvies.  But for the Thomas family, Obama requested, and Congress, appropriated … absolutely nothing.

What about the New Orleans evacuation plan? Where were their six volumes? When I watched the chaos in August 2005, I immediately called FEMA to ask for a copy of the plan. Why were there no busses to take out those without cars? The number of deaths should have been ZERO.
The answer: the New Orleans plan couldn’t be found.  The company paid to draft it, Innovative Emergency Management, couldn’t find a copy either. Long after 2,000 drowned, I found the “plan”:  no provision at all for the 27,000 residents without cars. That’s not surprising: the hurricane evacuation contractor had zero experience in hurricane evacuation. Rather, IEM’s chief did have lots of experience in donating to the Republican Party.
This week marks the sixth anniversary of the biggest ethnic cleansing in America since the Indian wars of the 19th Century:  the flooding of New Orleans.  We will celebrate this weekend, by worrying that Hurricane Irene will make the President and his donors on Martha’s Vineyard spill their daiquiris.
I met Patricia’s cousin five years ago today when, as dusk fell, she was in tears, wondering where she was going to stay with her kids that night.  “That’s what I want to know, Mister, where we going to?”
Well, I know of some usually-empty and quite nice federal housing units on Westhampton Dunes….
***
Greg Palast’s investigative report, Big Easy to Big Empty: the Untold Story of How the White House Drowned New Orleans is available as a free download at www.GregPalast.com, provided by the Palast Investigative Fund, a 501(c)3 charitable trust, on the Sixth Anniversary of the New Orleans’ flood.
Palast’s continuing investigation of the flood and its connection to the Deepwater Horizon explosion, filmed for Channel 4 Dispatches UK, will be published in November by Penguin USA.
Subscribe to Palast’s Newsletter and podcasts.
Follow Palast on Facebook and Twitter.