Georgia Governor Brian Kemp does not want you to know that it was his family that first brought enslaved Africans to Georgia.

The original settlers in Georgia had outlawed slavery until James Habersham — Kemp’s ancestor — won a bloody battle to bring humans in chains to his plantations.

Excerpt from Vigilante: Georgia’s Vote Suppression Hitman by Greg Palast, narrated by Rosario Dawson.
Available to watch at no charge through Nov 8 at VigilanteMovie.com

Habersham’s reward for bringing the slave system to Georgia? He was appointed acting Governor under King George II. So Kemp can claim a governing dynasty going back nearly three centuries. His mother was quite proud of it (her records and photo albums are priceless resources), but the current Governor demurs.

Let’s be clear: Brian Kemp did not bring enslaved humans to Georgia. Nor is he responsible for the horrors perpetrated by his long-dead ancestors. 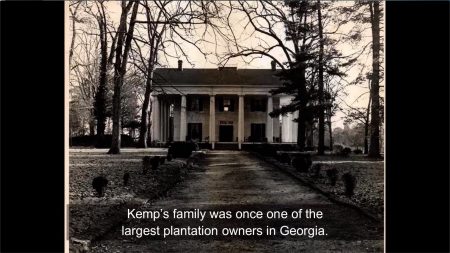 But Kemp, who fanatically avoids association with his dark origins, has gone so far as to ensconce historical amnesia into law. This April, Kemp signed HB1178, the so-called “Parents Bill of Rights” and a companion bill that makes it darn difficult for any schoolteacher in the Peach State to teach uncensored history and keep their job.

As Kemp noted in his signing ceremony, the law “will ban the teaching of divisive concepts” and, as a gleeful local newscaster said, “would make it easier to ban books.”

My question for the Georgia Bureau of Investigation: Is it divisive, under the law, to state the fact that the Kemp Dynasty’s power and privileges are sourced in human trafficking?

I spoke with Gov. Kemp’s cousin, Janie Banse, who believes it’s time for her family to ‘fess up to history, the uncensored history of Georgia, Jim Crow and the advantages enjoyed by those accustomed to rule, advantages that remain today.

Former US Congressman Bob Barrow told this reporter that, throughout Kemp’s life, the Governor been cosseted by political connections. Wealth arrived for Kemp on a silver spoon. While he plays himself as a self-made “small businessman,” in fact, young Brian waltzed into a multi-million dollar family construction business that cashed in on government contracts. 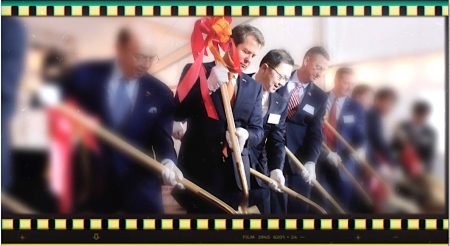 Brian Kemp with golden shovel. The story of his life.

Kemp finds make-believe history politically beneficial. The Congressman tells how Kemp first ran for State Senate in a district with many Black voters. Kemp ran ads touting how his grandfather, a powerful State Senator, courageously fought for desegregation. In fact, says Barrow, ”the truth was the opposite. He came up with a scheme to privatize schools to “privatize segregation.”

Another telling incident: Kemp’s construction company, says the Congressman, got around local code by building houses with fake windows.

Barrow explains that his own family’s high position owes much to slavery long ago; and the Congressman believes it is time to stop pretending otherwise.

Kemp’s easy life path is quite a contrast to Darien City Councilman Griffin Lotson’s road. Lotson maintains the Butler Plantation where another Kemp ancestor, Roswell King, was the overseer; where Lotson’s great-great-grandmother was held captive.

Roswell’s cruelty was known worldwide after a British visitor published a detailed account of horrors she witnessed. Fanny Kemble wrote in her diary:

“The handcuff, the lash, the tearing away of children from parents, of husbands from wives, despair and sickness. These are the realities which belong to this system in this country of yours which boasts itself the asylum of the oppressed.”

The Roswell branch of Kemp’s family also owned the Barrington Manor plantation house near Atlanta, a big tourist attraction — but, a local historian told us, the Governor, as far as he knows, has never visited his ancestral digs. I can’t imagine it would be a winning photo op.

While it’s foolish to impose our current values on the past, it’s simply not true that the slave trade was acceptable throughout Dixieland. The Habershams imposed the enslaved labor plantation system over the fierce resistance of the small-scale farmers who objected that, once slavery is introduced, they too would be reduced to servitude. 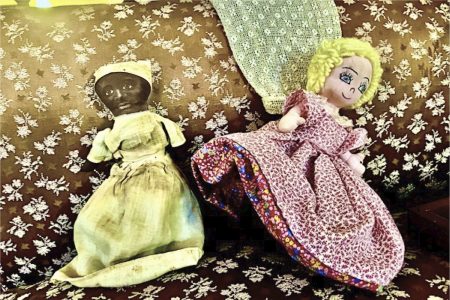 Even the toys at Kemp’s family’s plantation showed the difference between
the owners’ happy lives and the terror of the people they owned.

To these original Swiss-German freeholders, slavery was an abomination before God. The farmers of Darien, near Savannah, wrote a unanimous petition to the King’s counselor, stating:

“It is shocking to nature that any race of mankind and their posterity should be sentenced to perpetual slavery.”

The Africans were brought in to teach the English how to plant rice. Their reward: whippings, starvation and ultimately, “Weeping Time,” the biggest auction of human beings in history. 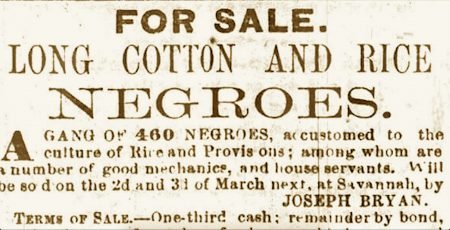 Thomas Jefferson wrote a draft of the Declaration of Independence at the Habersham’s famous pink manor house in Savannah. But few Americans know that Jefferson’s original Declaration included a long segment attacking the slave trade, a direct threat to the Habersham’s lucrative lock on the local slave auctions. The anti-slavery clause was the only part of Jefferson’s Declaration that was removed by the Continental Congress under pressure from the Georgia delegation headed by Joseph Habersham.

Apparently, the anti-slavery clause was too “divisive.”

Councilman Lotson draws a direct line between suppressing history and Kemp’s other legislative accomplishment: suppressing the vote of the descendants of the enslaved. Last year, Kemp, as he prepared for his re-match for the Governorship against Stacey Abrams, signed SB202 — what the NAACP calls “Jim Crow 2.0.”

Among the bill’s little noticed but most threatening clauses: any Georgian can challenge the vote of an “unlimited” number of other Georgians ballot. During our research for the film Vigilante, we met one GOP county chairman who personally challenged and blocked the vote of over 4,000 voters in Columbus, Georgia, including Major Gamaliel Turner, an African-American career military specialist. The Major was assigned by the military to a base on the West Coast — and was denied his ballot because this Republican official, Alton Russell, challenged the Major on grounds the soldier was not a citizen of Georgia. 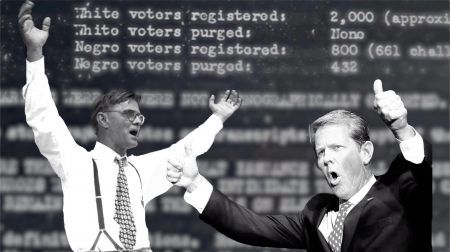 The history of the vigilante challenge law is elucidating, originally used in 1946 by Eugene Talmadge, who successfully won the Governorship by organizing his Ku Klux Klan followers to challenge Black voters en masse. Instead of white sheets, Kemp’s vigilantes use spreadsheets to challenge thousands of legitimate at the push of a button. (Note: Not a single voter challenged, out of over 168,000 challenged has been charged with attempting to vote illegally.)

I thought I’d warn Councilman Lotson about making “divisive” statements in Georgia. No matter how true.

Greg Palast’s investigation of Brian Kemp and the history of vote suppression, the documentary Vigilante: Georgia’s Vote Suppression Hitman, will have a no-charge screening this week only at VigilanteMovie.com

The film’s Director, David Ambrose, contributed research for this article.

Interesting. Not surprising of course. But, you know, interesting nonetheless. Dinner of the delusional? Birds of seditious, racist feather flock and scheme together. https://twitter.com/Greg_Palast/status/1596580432446779393