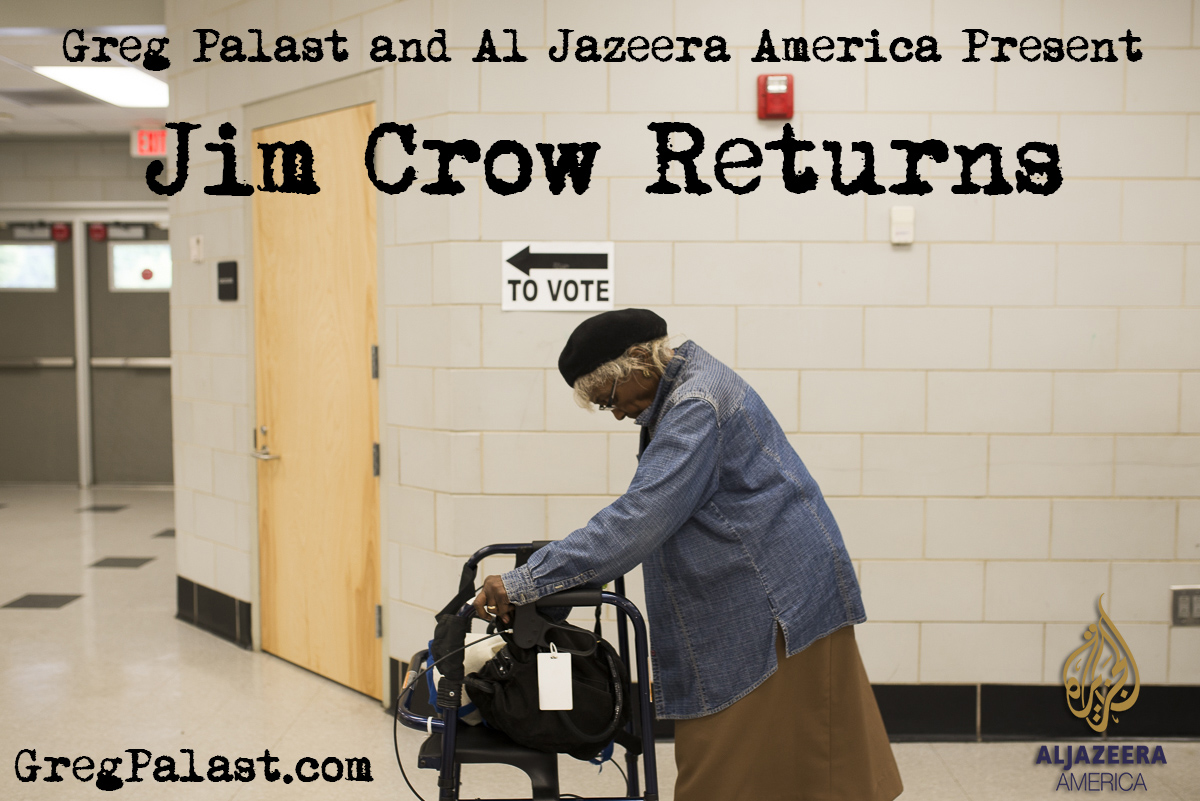 Election officials in 27 states, most of them Republicans, have launched a program that threatens a massive purge of voter rolls, especially targeting minority voters.

Al Jazeera America has obtained 2.1 million names from the target lists,  kept confidential until now.  Experts reviewing the lists conclude it is suspiciously over-weighted with Black, Hispanic and Asian-American voters.

The targeted voters have been tagged as “potential  duplicate voters,” suspected of voting twice in the same election, in two different states, a felony crime punishable by 2-10 years in prison.
Until now, state officials conducting the purge have refused to turn over their lists on grounds that these voters are all subjects of a criminal investigation.

The match lists of suspected double voters, called Interstate Crosscheck, has been compiled for each state by Kansas’ controversial Republican Secretary of State, Kris Kobach.
The lists are rife with literally millions of obvious mis-matches:

Al Jazeera found that nearly a fourth (23% ) of the accused voters lack matching middle names.
For example, Kevin Thomas Hayes of Durham, North Carolina, is allegedly the same man who voted in Alexandria, Virginia, as Kevin Antonio Hayes.
“Jr.” and “Sr.” are regularly mismatched, potentially disenfranchising two generations in the same family.
While Kobach, in his public description of Crosscheck, claims that double voters are matched by Social Security number, in fact, internal documents admit that “Social Security numbers might or might not match.”
So far, no case has been made against a single one of the accused double-voters on the lists, though tens of thousands have already lost their right to vote based on inclusion in the lists.
North Carolina has hired a full-time former FBI agent to arrest double voters.  However, because the match list of 190,000 suspects in that state is so recklessly compiled, the Board of Elections has admitted to Al Jazeera that not one voter has been charged with the crime of voting twice.  Nevertheless, the Republican-controlled Board of Elections has begun the process of removing the registration of voters on the lists.
The lists are heavily over-weighted with names such as Jackson, Garcia, Patel and Kim, common to minorities who vote overwhelmingly Democratic. Indeed, one in seven African-Americans in those 27 states are listed as suspected of the crime of voting twice, one in eight Asian-Americans, and one in eight Hispanic voters.  White voters too, one in eleven, are at risk, though not as vulnerable as minorities.
Georgia Democrats Angered by “Stealthy” Purge
Georgia’s Democratic leaders say they are shocked that they have been kept in the dark about the state’s use of Crosscheck purge lists – and the racial profile of the targeted voters.
“It’s biased, I think, both in form and intent,” says Rep. Stacey Abrams, leader of the Democrats in the Georgia state legislature. “But more concerning to me, is the fact this is being done stealthfully. We have never had this information presented to us.”
“It’s Jim Crow all over again,” says Rev. Joseph Lowery, who succeeded Martin Luther King as chairman of the Southern Christian Leadership Conference. Lowery, now 93, says he recognizes in the list of threatened voters a sophisticated new form of an old and tired tactic. “I think [the Republicans] would use anything they can find. Their desperation is rising.”
Read the entire investigative expose by Greg Palast at Al Jazeera.
* * * * * *
For 15 years, Greg Palast has been uncovering voter suppression tactics in investigative reports for BBC Television, The Guardian, Harper’s and Rolling Stone.
Greg Palast is the author of several New York Times bestsellers including The Best Democracy Money Can Buy and Billionaires & Ballot Bandits.
Get a signed copy of Palast’s latest film Vultures and Vote Rustlers.
Make a tax-deductible donation and support our ongoing investigation into voter suppression.
Subscribe to Palast’s Newsletter and podcasts.
Follow Palast on Facebook and Twitter.
www.GregPalast.com