Palast is the author of Vultures’ Picnic: in Pursuit of Petroleum Pigs, Power Pirates and High-Finance Carnivores.
What have I done?  There’s one angry squid out there. 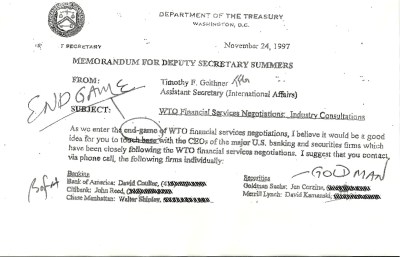 Memo from Tim Geithner to Larry Summers
(click to enlarge)

Last week, Democracy Now! and The Guardian ran our story about Goldman Sachs yanking financial support from a community credit union for honoring one of its largest customers.  The customer:  Occupy Wall Street.
Our report so enraged Goldman that, within days, it doubled down on its attack on the little community bank.
Goldman had already demanded the return of its $5,000 payment to the Lower East Side Peoples Federal Credit Union.  Now, sources say, the trillion-dollar Wall Street mega-bank sent the following message to the not-for-profit community bank:  “You will never get a dime from any bank ever again.”
About those “dimes” Goldman is taking away:
They come from you and me, the taxpayers who put up billions into the Troubled Asset Recovery Plan (TARP), usually known as the Bank Bail-Out Fund.
For Goldman to suck its $10 billion from the TARP trough, Goldman had to change from investment bank to commercial bank. This change makes Goldman subject to the Community Reinvestment Act (CRA) and requires it by law to pay back a notable portion in funds for low-income communities, abandoned by the big banks.
In other words, Goldman is beating up Lower East Side Peoples (which operates in Harlem and the Latino New York neighborhood known as Loisaida).
The Credit Union’s Chairwoman told me that, “We have not drawn a line in the sand with Goldman Sachs.” The community bank does not want to go to war with Goldman.
The bank stated, following the initial posting of this report, “The Lower East Side People’s Federal Credit Union would like to clarify that it does not consider itself ‘at war’ with Goldman Sachs or any other financial institution.  The Credit Union has not received any further communication from Goldman since its decision to withdraw its support from the fundraising event to celebrate our 25th Anniversary.”
The Community Bank wants to emphasize its decades of work serving low-income communities. The point in their honoring Occupy Wall Street is not to attack Goldman says Chairwoman Deyarina Del Rio, but to recognize that the Credit Union and the protestors, “share a philosophy” of putting people before profits.
I would note that Goldman’s nasty threat to cut off funding for Peoples, the credit union that is officially chartered as the bank for low income New Yorkers, came with a complaint about this reporter.
Goldman claims that Greg Palast called only one time to get Goldman’s side of the story.  (I called many times, as did my associate, and we left the same repeated message: I want your side of the story. Please call me and tell me if you’re punishing the poor peoples’ bank because they are supporting the demands of Occupy Wall Street?)
There are tens of billions of dollars at stake in the Community Reinvestment funds due from the big banks.  As other banks are making noises of heeding Goldman’s call to whip the uppity little credit union, an answer from Goldman becomes urgent.
So, Goldman, I’m still waiting for an answer.  You’ve got my numbers, so just pick up a tentacle and call.
********
Chapter 12 of Vultures’ Picnic, “The Generalissimo of Globalization,” includes the Palast team investigation of confidential documents of meetings over years between Tim Geithner, Larry Summers and the CEOs of Goldman, Bank of America and JP Morgan.
The investigation takes the Palast crew from a dictator’s shopping spree in Geneva to the Andes to Africa and back to Palast’s years within the circle of a troll-like character named Milton Friedman.
Pre-order Vultures’ Picnic now or donate for a signed copy.
***
Greg Palast is the author of Vultures’ Picnic: In Pursuit of Petroleum Pigs, Power Pirates and High-Finance Carnivores.

Get it now!
For more information about Palast’s brand new book and his book-signing events in your city, go to www.VulturesPicnic.org
Subscribe to Palast’s Newsletter and podcasts.
Follow Palast on Facebook and Twitter.
GregPalast.com