Amy Goodman, Democracy Now!…
“Top funders of the Republican Party have demanded that two African nations pay them over half a billion dollars…. Is one of these vulture’s claims based on a stolen security, criminally transferred to an American financier called ‘Goldfinger’? Greg Palast, author of the new book, Vultures’ Picnic, investigates for BBC Television and The Guardian.”
Greg Palast reporting from Kinshasa, Congo; Sarajevo, Bosnia; and Brooklyn, New York

If God doesn’t give a rat’s ass about The Vulture, and what he does for a living, and what he’s done for Africa, why should I?
The thought struck me while sitting here, coffee getting cold, in my old Toyota, trying to look invisible, staked out in front of 300 Dekalb Avenue. It’s just after dawn here in Brooklyn, New York, and I’m hoping that Peter Grossman, a Wall Street star, will pop out of his posh brownstone for a jog or a cup of joe. Then I can jump him. He’s on the look-out for me because I’d already jumped his crony, Goldfinger, the man who’s making Grossman stunningly rich.
Grossman’s riches, nearly $100 million for his firm, FG Management, come from the Congo. I was just there in Congo, two days before this stake-out, at a cholera quarantine center in the capital, Kinshasa.
Besides lots of cholera, Congo has lots of cobalt. Grossman has, through a crazy legal loophole in British law, waylaid a payment of $80 million to the African government for a shipment of cobalt from a government-owned mine.
Grossman is a “vulture,” the name Wall Street gives,
with an affectionate smile, to those who somehow can get their hands on old, forgotten debts of desperately poor nations – Congo, Zambia, Peru, and Liberia are cases I’ve investigated – which they pick up for pennies on the dollar of face value.
When – usually after a Bono concert – Western nations forgive debts owed by these poor countries, the nation receiving this aid is now ripe enough, and flush enough, for attack by the Vulture who demands many a pound of flesh for the debt he suddenly brandishes. 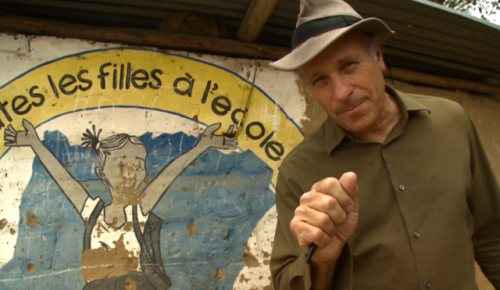 In Grossman’s case, his company FG paid about $3 million for a debt Zaire (now Congo) owed Yugoslavia (now Bosnia). A court on the tiny island of Jersey, a tax haven in the English Channel, has ordered Congo to turn over the $80 million the African nation has in a bank account there, the payment for the cobalt. Furthermore, Congo must pay an additional $20 million to Grossman if the Africans can find it.
If that seems weird and nuts to you, it is. The United Kingdom and other nations bar collections by vultures against poor countries where Western government treasuries have agreed to give up their own claims. However, Vulture Grossman was free to pounce on Congo in Jersey, a pseudo-colony of Britain, because Britain’s Parliament failed to include the magic words, “and Jersey” in its anti-Vulture law.
Question: How did Vulture Grossman get his hands on Congo’s debt to Bosnia? That’s what, while suppressing my need to urinate, I was waiting in the Brooklyn cold to ask him.
Here’s what I can piece together: Only three days before I was in the Congo cholera clinic, I was in the office of the chief of financial police in Sarajevo, Bosnia. With master sleuth Drew Sullivan of the Sarajevo Center for Investigative Reporting, we tracked down the police report asserting that the nation’s own prime minister had slipped control of the debt to one Michael Sheehan, a.k.a. Goldfinger who, for a fee, passed it from the Bosnia state power company to Grossman.
Goldfinger. We meet again. The Bond-movie Goldfinger is a Girl Scout compared to the real one. He’s the man I discovered four years ago who paid off the President of Zambia to shaft his own nation out of its AIDS medicine money. The FBI and I have been discussing Goldfinger.
In Sarajevo, the Bosnian police chief told me the little hand-to-hand-to-hand business with the Congo debt was a crime, and the (now former) prime minister, a man named Nedzad Brankovic, should be in prison. The cops have written out the criminal complaint, but prosecutors have yet to touch the powerful politician.
I got to the man who blew the whistle on Brankovic, Brigadier-General Izet Spahic. He’d worked out a deal for the Bosnia power company (desperately broke) to make power pylons for the Congo (desperately broke). The project would generate electricity, clean water and profits for both countries.
It was quite a heart-warming story of two nations coming out of civil wars, with a combined total of four million dead, helping each other. But when it was discovered that the Vulture at 300 Dekalb Avenue in Brooklyn had secretly seized control of the debt between the nations, the electricity deal was off.
I went by the Bosnia pylon-making factory. It was now shut and its several thousand workers gone. At least there’s no cholera.
The Brigadier was furious. He asked me, how could these people think about making a profit off of civil war, poverty and unimaginable suffering?
Well, General, When do humans grow feathers and claws?
It’s a question I’m going to ask Vulture Grossman when he comes out because the Guardian and BBC Newsnight want me to ask.
For myself, the Vulture’s answer is inconsequential.
I assume that after we break our story, the British Parliament will move to close the loophole it so glaringly left open to the Vulture; and the US Congress will at least pretend to consider anti-vulture legislation now languishing in some committee.
But I think the focus on Grossman and his fellow carrion chewers is distracting. The destruction of Bosnia’s power-pylon industry was the direct consequence of privatizing it, bringing the free market to socialist Yugoslavia and Brankovic to power, allowing him to buy and sell debt securities on the de-regulated world financial market.
It was the privatization of Congo’s state cobalt mine and the looting of its riches, all at the behest of the World Bank, IMF and privateers, that drained Congo’s treasury.
Grossman is just the re-po man, the latest of the financial carnivores who’ve bitten into Congo and Bosnia”“”“and Greece and Detroit.
Grossman’s vulture operation is just over the bridge from Occupied Wall Street, occupied at the bottom by protesters, “The 99%,” and occupied at the top by The One Percent, those who kill economies for a profit.
It’s easy to target Grossman. But Vultures can only feast when the system kills, when, for easy profits, economies are turned into rotting carcasses.
****
Greg Palast is the author of Vultures’ Picnic: In Pursuit of Petroleum Pigs, Power Pirates and High-Finance Carnivores, released this week in the US and Canada by Penguin.
You can read Vultures’ Picnic, “Chapter 1: Goldfinger,” or download it, at no charge: click here.
WBAI will launch Palast’s new book in New York City on December 5. Get your tickets here.
Get info here on these tour cities:
Chicago – Nov 28 & 29
Madison – Nov 30
Albuquerque – Dec 1
Santa Fe – Dec 2
New York – Dec 5
Washington, DC – Dec 6
Houston – Dec 8
Baltimore – Dec 9
Burlington VT – Dec 12
Atlanta – Dec 15
***
Subscribe to Palast’s Newsletter and podcasts.
Follow Palast on Facebook and Twitter.
GregPalast.com