Getting into Massa’s Drawers
Truly Creepy Details about the Congressman

Exclusive for Buzzflash.com
For the two weeks before tickle-and-grope charges busted open on him, and before his resignation from Congress, our BBC Television investigations team was hunting for Representative Eric Massa. 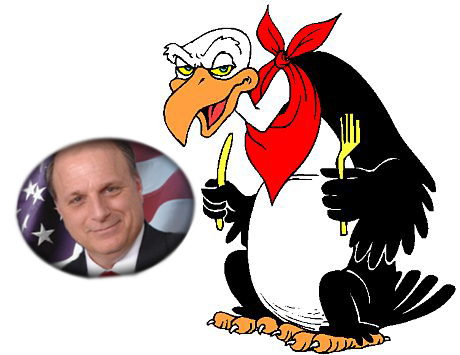 We wanted to know what he had hidden in his drawers. Not his knickers, which have captivated America’s peep-show media, but Massa’s file drawers where he keeps his dirtier secrets.
Frankly, I don’t give a rat’s ass about Massa’s creepy little peccadilloes. But I care an awful lot about creeps that quietly backed him.
Massa plays himself as a two-fisted Progressive Democrat, telling the President to jam his fake health care bill where the Rahm don’t shine, and he gave the Iraq war his middle finger. I mean, the guy was on Rachel Maddow.
That’s the television Massa. But what about the Congressman Massa? And why was he ducking us?
I specifically wanted to ask the New York Congressman about Paul Singer: “Swift Boat” Singer, the guy who funded the vile attacks on Presidential Candidate John Kerry. “Swift Boat” Singer – reportedly the biggest funder of the Republican Party in New York. Our information was that the demi-billionaire Singer was backing Massa.
Singer’s nickname isn’t really Swift Boat. It’s “The Vulture.”
Singer is a speculator, the predator-in-chief of the flock of financiers, collectively known as “vultures,” who buy up the right to collect on old loans made to the world’s poorest nations. Vultures use law suits, political muscle, and in some cases, bribery, to get nations like Congo and Liberia to pay these hedge funds up to 100 times what the vulture originally paid for the debt.
As you can imagine, vultures don’t have lots of friends; and those they have they must purchase.
The vultures had been looking for some morally challenged congressperson to front a bill to help them crank billions from the budgets of Third World nations. The law that could make demi-billionaire Singer a billionaire is called, “The Judgment Evading Foreign States Accountability Act” (H.R. 2493).
In effect, the bill says that if Argentina (and other Third World nations) don’t pay Mr. Singer and his vulture buddies the billions they demand, then the US government will act as Singer’s enforcement arm, hanging out Argentina to dry, cutting off trade between our countries.
Now, as Mr. Singer became Mr. Checkbook to the Republican Party in New York, you’d assume that his make-me-richer bill would be sponsored by some right-wing GOP troglodyte. Wrong: the rent-boy, the chief sponsor of Singer’s bill, was, to our amazement, the “liberal” Democrat Eric Massa.
Two sources tell us that Secretary of State Hillary Clinton was not amused at Massa’s weirdo attack on the financial lifeblood of US allies, nor does the White House favor a law which would provoke seizures of US assets abroad.
Our information was that Massa, crazy-desperate for campaign cash, was now getting juice from Singer and other vultures. I wanted to ask the Republican-turned-Democrat about his funding and about how he ended up in a political tryst with vultures.
The normally television-hungry Congressman refused our every attempt to get him on camera. And Singer’s PR flack told me his own boss would speak to me “never, ever.”
But we do know the cover story. Massa’s bill was promoted by a benign-sounding group called, “The American Task Force Argentina.” The ATFA website says their goal is, “Pursuing a Fair Reconciliation of the Argentine Debt Default.”
There are some very progressive folk on ATFA’s payroll. Its masthead lists “Ambassador Nancy Soderberg.” Nancy’s not actually an ambassador, but she did hold that title a decade ago under Bill Clinton, and she even worked for Ted Kennedy. The other co-Chair is listed as “The Honorable Dr. Robert J. Shapiro.” Shapiro’s no longer an “Honorable,” but, back in the day, he held that title under Clinton as Undersecretary of Commerce. Now he’s a lobbyist. 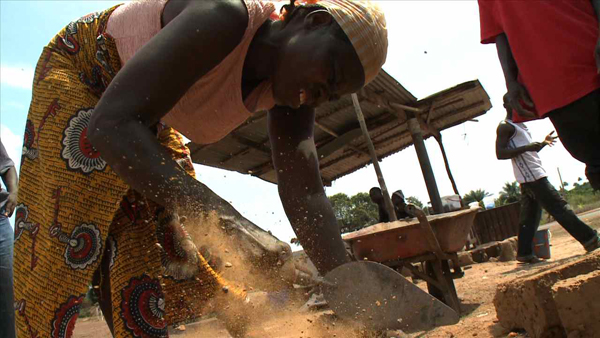 These good liberals charge mucho bucks per hour for their influence. Who picked up the tab? Well, there was FH International and Montreux Capital, vulture funds that tormented West Africa’s poorest nation, Liberia.
Those are the vulture funds that, when I came to question them in their New York offices last month, unbolted their name plaque from the building wall and locked their employees inside to hide from our camera crew.
Also behind ATFA: Elliot Associates — Paul Singer, proprietor.
I wanted to ask Bob Shapiro what he and these other good Democrats were doing with vulture feathers in their wallets. (The Honorable Bob leaped at the chance to appear on BBC TV … until he was told that the reporter would be Greg Palast. Instantly, Dr. Shapiro became unavailable.)
I’m sure Shapiro would have told me that, unlike Republicans, you can’t buy Democrats. True, but apparently, you can rent them.
So, that’s the cover. A “liberal” group funded by a right-wing Republican fronting for those trying to shake down Argentina to pay on bogus “loans” that Singer and FH International bought for next to nothing,
If Bob Shapiro will front for predators for cash, that’s his business. But if Massa took campaign loot in a quid pro quo for legislation, that’s our business.
I don’t know the answer. But Massa does. And he won’t talk to me. Nor will he talk to the House Ethics Committee.
On March 5, Massa abruptly resigned from Congress – which put an immediate end to the Ethics investigation of his activities.
At first, he said he was quitting Congress because he has cancer. Then he said he resigned because a buck-naked Rahm Emanuel bullied him in the Congressional shower-room and then threatened him over his health care vote. (Foxhole wing-nut Glenn Beck fell for that canard.) Then Massa said he resigned because of an aide’s accusation that the Congressman tickled the aide in an “inappropriate” manner. (The mainstream press swallowed that one whole.)
I don’t believe any of it. (Senator David Vitter (R-LA), known as “Vitter The **itter,” was caught getting diapered by the Washington Madame, and still remains in the Senate voting against what he calls Obama’s “immoral” program.)
Would the real Eric Massa please step forward and tell us the real reason he’s resigning? Eric, my door’s open and my microphone’s on.
I don’t want to talk about your zipper. I do want to ask you about any connection between speculator money and your save-the-vultures bill.
Unfortunately, despite our many pleas, Mr. Massa, you won’t speak to us on camera or off. Apparently the subject of your financier buddies is a little too ticklish.
***
Greg Palast’s investigative reports for BBC Television on vulture funds can be viewed at http://www.GregPalast.com.
Palast will be speaking in Chicago, on Friday, April 9, at 6:30pm, at Columbia College Film Row Cinema in conversation with This is Hell radio host Chuck Mertz.