TrumpCare dies, XL flies and the Secret Winner is… 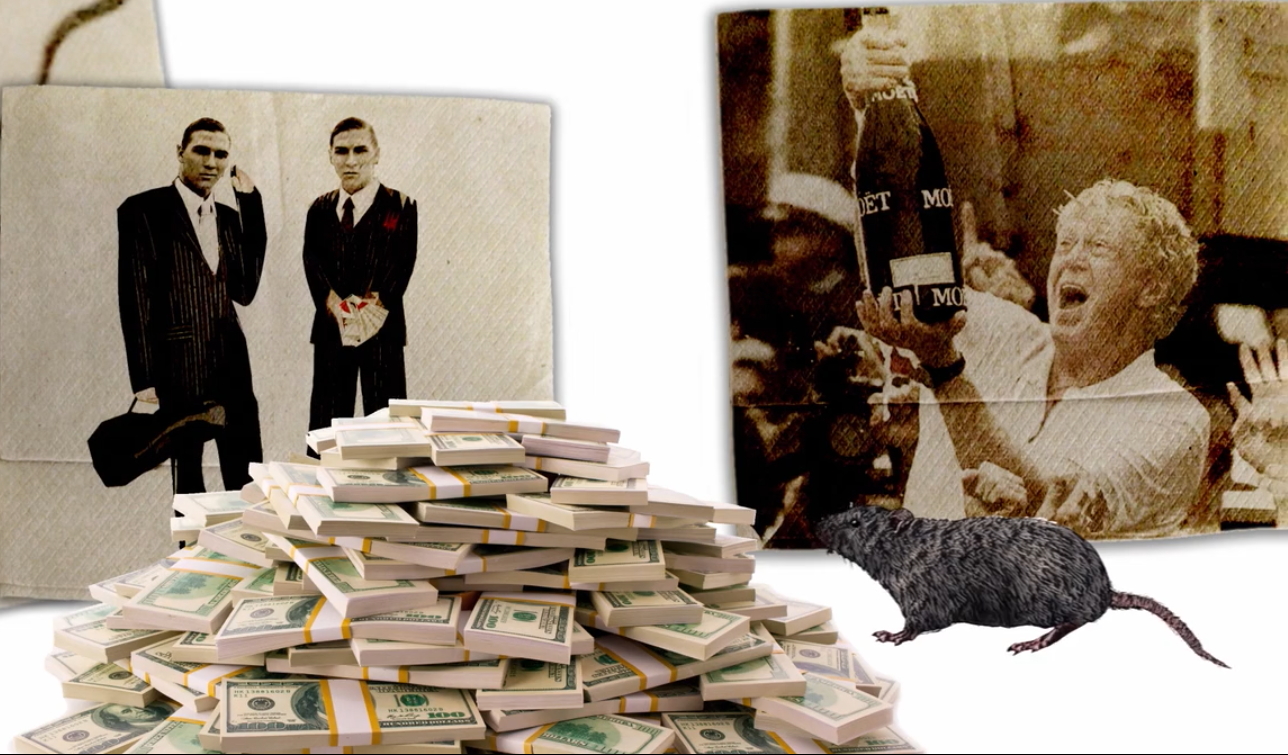 Koch Brothers celebrate their victory (from The Best Democracy Money Can Buy)
When RyanCare-TrumpCare finally ended up face-down in the swimming pool, triumphalist Democrats whooped and partied and congratulated themselves on defeating the Trump-Ryan monstrosity.
But deep in their counting house, counting their gold, three brothers cackled with private jubilation.
David and Charles Koch knew the day was theirs.
Joining them in the celebration was Brother Billy, William Koch, who will share in their $21 billion windfall that the President arranged for them only hours before TrumpCare crashed””when Trump announced his State Department had formally approved the Keystone XL Pipeline.
Let’s start with that $21 billion.
The XL Keystone Pipeline would take the world’s heaviest, filthiest crude from Canada’s tar sands, and snake with it all the way down to Texas.
From Greg Palast’s film The Best Democracy Money Can Buy: A Tale of Billionaires and Ballot Bandits
Now here’s a question I never hear from our sleep-walking media: Exactly why are we sending oil all the way across the United States to Texas. I mean, doesn’t Texas already have a little oil?
In fact, Texas is drowning in oil, choking in it. But the Kochs’ Texas refinery can’t use much local crude. The Koch Industries Flint Hills refinery on the Texas Gulf Coast was designed specifically to crack only the world’s “heaviest” (i.e. filthiest) crude.
Texas crude ain’t heavy enough, ain’t dirty enough, for the Kochs’ Gulf Coast operation, originally designed for imports for the world’s major source of heavy crude: Venezuela. The price the Kochs paid for Venezuela’s oil was set by its President Hugo Chavez, and now, by Chavez’ chosen successor, Nicolas Maduro.
Chavez and Maduro both told me they’d squeeze the Kochs by their tankers. They have.
Enter the Mounties: Canadians sell their super-heavy crude at a $12 to $30 a barrel discount to the Venezuelan price. If the XL Pipeline is complete, the Kochs can suck down Canada’s cheap cruddy crude for a minimum savings of $1.27 billion in a single year.
The Kochs pocket billions while we fry: burning the Canadian tar sands reserve will, all by itself, raise the temperature of the entire planet by 0.7 degrees Fahrenheit.
Over the life of the XL Keystone Pipeline, the various Koch operations will put at minimum, $21 billion in Koch family pockets. Because we have to add in not only Charles’ and David’s gains, but Brother Billy’s windfall as well”
Brother Billy’s Filth Factory 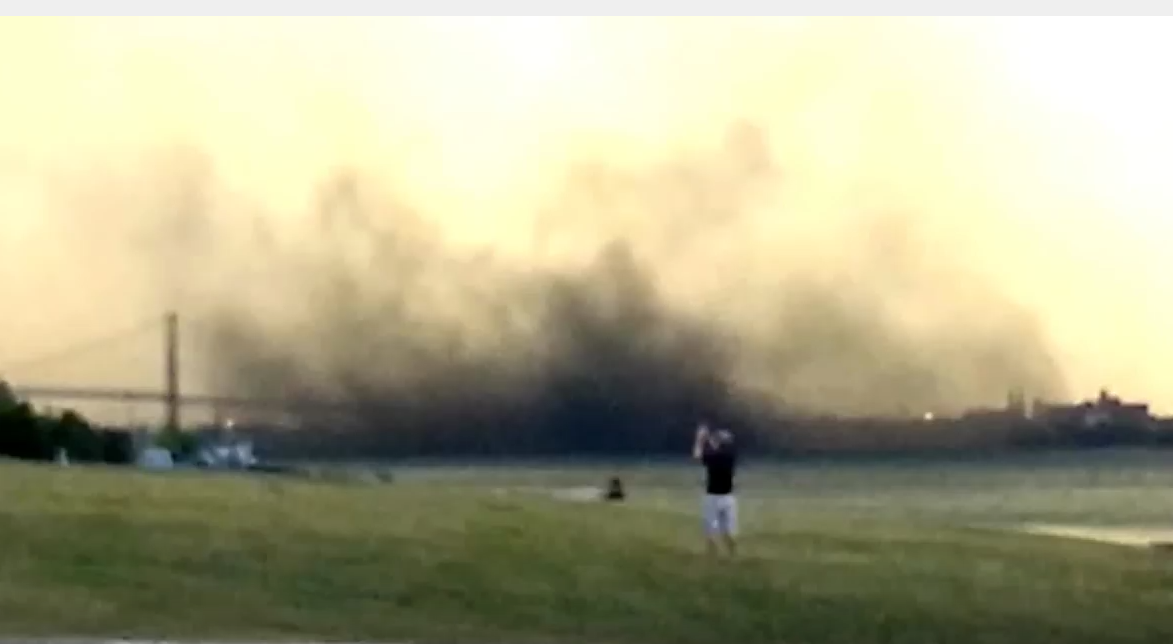 Koch Carbon pet-coke dust cloud, Detroit
The third, lesser-known Koch is Brother William, now principal of Oxbow Carbon. The name itself gives environmentalists the heebee-jeebies.
To keep the tar sands gunk flowing through the Keystone pipeline, the worst of the tar must be extracted and processed as “petcoke,” stuff so filthy and toxic it is illegal to burn in the USA. So Billy Koch sells the compressed filth to China and Mexico.
And Billy’s bro’s have joined the “petcoke” game too. David and Charles’ subsidiary, Koch Carbon, already pulls the gunk from the current Keystone pipe where in Detroit it’s accumulating in piles bigger than the pyramids. Here’s a photo of Koch’s coke wafting over Detroit’s city parks.
Which explains why the Koch’s political front operation, Americans for Prosperity, named approval of the XL Pipeline the number one priority for the Trump presidency.
KochDon’tCare
When TrumpCare breathed its last, the President blamed Democrats for its untimely demise.
A stunned by-stander, Democratic Minority leader Nancy Pelosi, went for it: “We’ll take credit for that.”
Sorry, Nancy, you can’t.
Because it was the Kochs’ brownshirts, the self-styled “Freedom Caucus,” that, in a bestial assault, crushed a sitting President and their own leader of Congress, Paul Ryan. The thugs’ secret weapon: heavy bags of cash, Koch cash.
Koch front groups, including Americans for Prosperity (the XL promoter, promised unlimited funds to any far-right Congressman who would vote against the bill. The Kochs’ Freedom Partners Executive Director told members of the uber-right Congressional Freedom Caucus, “We will stand with lawmakers who keep their promise and oppose this legislation” with a “seven-figure” war chest. In the old days, that was called “bribery.” But today it’s called, “Koch.”
Blow-hard Trump threatened them, but Koch’s money protected them.
The Kochs don’t want ObamaCare, TrumpCare, nor any care at all for Americans that add to their tax bill. Call it KochDon’tCare.
Billionaires versus Billionaires
But keen observers of TrumpCare would note that it was not really a health care bill, but a tax bill-specifically, a tax cut of some $157 billion that has been charged to the richest Americans to fund ObamaCare through a 3.75% tax on passive investment income””that is, money earned, not by working, but by speculating.

Because behind the public creator of the bill, Speaker Paul Ryan, stood Ryan’s number one funder, a billionaire known as The Vulture. The Vulture, aka Paul Singer, makes all his money by nasty methods excoriated even in the Wall Street Journal. 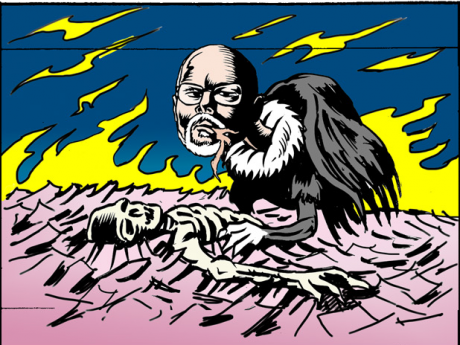 Paul ‘The Vulture’ Singer, from The Best Democracy Money Can Buy
(Image by Keith Tucker)

In Trump’s weird psycho-babbling press conference last month, he said, “So I want to thank Paul Singer for being here and for coming up to the office.” Reporters scratched their head, not knowing who this “Singer” is nor why Trump brought it up.

Now, you know what that was about.
Singer makes all his money from speculation income. The Ryan-Trump “healthcare” bill was first and foremost a tax cut for Singer, likely worth billions to The Vulture (and more to his cohort including Treasury Secretary Steve Mnuchin).
But to the Kochs, this tax break is nearly worthless. So, behind the curtain, this was a fight of billionaires versus billionaires.
The Kochs, having built up their army of useful idiots-the Koch-funded Tea Party and Freedom Caucus, won this one. (Hey, no hard feelings. The Vulture still dines with the Kochs in Vail and donates to their super-PACs.)
Sure, let’s breathe a sigh of relief that, with ObamaCare momentarily saved, we won’t have more amputees begging in the subway, meth addicts croaking in New Hampshire and my bank account emptied for my next heart surgery.
It’s not Trump’s victory that portends fascism-it is the bending of Trump by the hands of the poisonously greedy Brothers Koch that brings the fascist corporatist state one day closer.
And that is nothing to celebrate.

Greg Palast (Rolling Stone, Guardian, BBC) is the author of The New York Times bestsellers, The Best Democracy Money Can Buy and Billionaires & Ballot Bandits, now out as major motion non-fiction movie.
Stay informed, get the signed DVD, a signed copy of the book companion or better still – get the Book & DVD combo.
Palast is also the author of the New York Times bestseller Armed Madhouse and BBC Newsnight book of the Year Vultures’ Picnic.
Visit the Palast Investigative Fund store or simply make a tax-deductible contribution to keep our work alive!
Or support the The Palast Investigative Fund (a project of The Sustainable Markets Foundation) by shopping with Amazon Smile. AmazonSmile will donate 0.5% of your purchases to the Palast Fund and you get a tax-deduction! More info.
Subscribe to Palast’s Newsletter.
Follow Palast on Facebook and Twitter.
GregPalast.com