Georgia’s Board of Elections is trying to sneak through a new rule that could block new registrations before the Senate runoff to people who don’t have a car registered in the state. 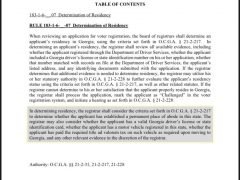 This knocks out students and lower income urban voters (i.e. Black Atlantans) without cars. Of course, you can’t force people to buy a car in order to vote. The voters will be allowed on the rolls after a hearing, which will of course be after the January 5 election.

The GOP Secretary of State’s excuse? To prevent voter fraud. Brad Raffensperger claims people from out of state will be driving into Georgia to register to vote in the runoff.

Our team in Georgia contacted Raffensperger’s office and asked if they’ve encountered a single fraudulent out-of-state voter. So far, we’ve had no answer.

We will expose it. We will fight it.

UPDATE: During the Election Board meeting, which took place on Monday, the group declined to discuss this new rule after Ryan Germany, General Counsel for the Secretary of State’s office, advised the board that local officials already had the authority laid out in the proposed new rule. It was therefore decided that rather than going to the inconvenience of voting on the new rule, the Secretary of State’s office would simply remind election officials of their existing powers by issuing the information in an official election bulletin.

This bulletin has exactly the same effect. We are not fooled.

Furthermore, we know Georgia has already been implementing this vote-denying tactic since it’s exactly how they tried to stop my daughter from registering to vote in Savannah before the 2018 election. Officials challenged her voter registration application on the grounds that she did not have in-state Georgia plates on her car. She was forced to jump through several hoops before her name was added to the voter rolls. Most young people in her position would have just given up, which is exactly what they want.

And by the way, the rule not only states “The registrar may also consider…whether the applicant has a motor vehicle registered in this state,” but also that the registrar can take into account “whether the applicant has paid the required title ad valorem tax on such vehicle”. What does this have to do with voting except to knock out students and low income people — the blue people?

For more on this, watch my interview with Thom Hartmann below.

for everyone asking "HOW WAS IT SO CLOSE?!?!"

This shit is crazy. I’ve never had to wait in line to vote on Election Day.

And still, despite this, democracy prevailed in Georgia. We still have a LONG way to go to undo these attempts to silence voters through discouraging tactics. https://twitter.com/Greg_Palast/status/1599079323490988033