Georgia Lawsuit to Restore Voters to Rolls Ahead of Runoff

ATLANTA—December 2, 2020— Black Voters Matter filed a federal lawsuit today with the United States District Court Northern District of Georgia Atlanta division, alleging that Secretary of State (SOS) Brad Raffensperger violated the National Voter Registration Act when he removed around 198,000 citizens from the voter rolls by claiming they had moved from their address listed on their voter registration. Joined by the Transformative Justice Coalition and Rainbow PUSH, Black Voters Matter et al v Raffensperger states that none of those citizens had moved. The lawsuit seeks a preliminary injunction to stop the SOS Raffensperger from prohibiting these citizens from exercising their sacred, fundamental, and legal right to vote in the upcoming January election. 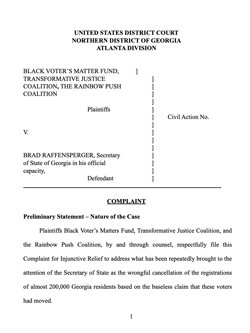 In summary the state of Georgia has wrongly purged—cancelled the voter registration—of voters because they supposedly moved—but they had not moved. Specifically, the state said that thousands of voters had submitted postal Change of Address forms—but the Post Office says they did not. Additionally, Georgia —in violation of federal law—used an unlicensed contractor who used the wrong list. The National Voter Registration Act says the state must use a licensee of the US Postal Service—they did not.

The lawsuit [case number: 1:20-cv-4869 in the Northern district of Georgia] comes days before the Georgia voter registration deadline of December 7 with the goal to reinstate these individuals and put these voters back on the rolls now – and urge people to vote timed to January 5th runoff elections.

The announcement of this lawsuit coincides with PSAs voiced in English and Spanish by Hollywood superstars Rosario Dawson and Zoe Saldana with a call to action for Georgians to check if they have been purged via the website SaveMyVote2020.org.

This lawsuit is based on the expert reporting of The Palast Investigative Fund and the official report that was released on September 1, 2020.

According to the lawsuit, the National Voter Registration Act and Georgia law require the state to use a U.S. Postal Service (USPS) licensee to determine whether a citizen had moved from their residence listed on their voter registration. Specifically, the fe52 USC 20507 (c) states under the heading, “Voter removal programs.” However, the SOS failed to secure a USPS licensee as required by law, and instead used an unlicensed change-of-address list, provided by Total Data Technologies of Nebraska, which is not a qualified licensee of the USPS.

On numerous occasions, The Palast Investigative Fund has offered to have experts sit down in a publicly available meeting with SOS Raffensperger’s USPS licensee to review the findings to determine the source of the errors on Georgia’s list. Mr. Palast, founder of the investigative fund, also offered to pay the fee for the state to acquire the services of a U.S. Postal Service licensee. To date, neither the secretary nor anyone in his office has yet to respond to the offer.

The Palast Investigative Fund is a 501c3 non-partisan not-for-profit foundation headed by Greg Palast, an investigative journalist whose award-winning reports have appeared in Rolling Stone, Salon.com, Al Jazeera, the Guardian, and BBC TV.