From White Sheets to Spreadsheets 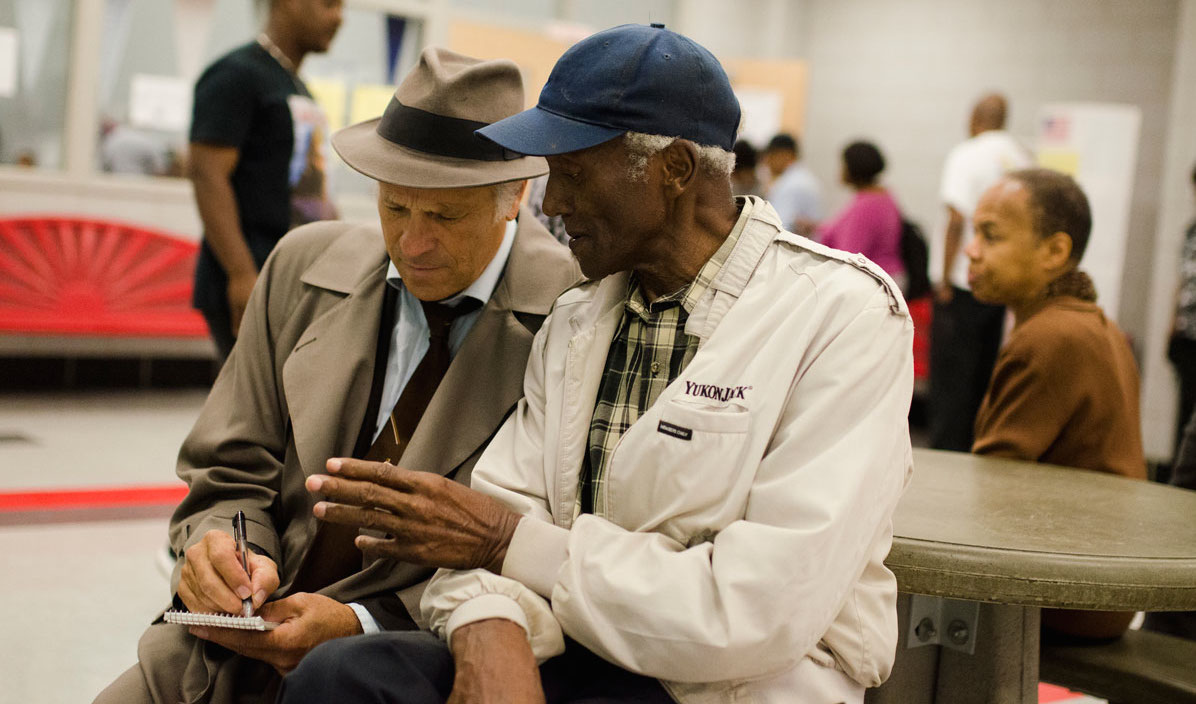 I hate to spoil a happy ending.
The movie “Selma,” like this week’s commemorations of Martin Luther King Jr.’s march from Selma, Ala., 50 years ago, celebrates America’s giant leap from apartheid.
Half a century ago Alabama state troopers and a mob of racist thugs beat African-Americans and others as they marched across the Edmund Pettus Bridge, demanding no more than the right to vote. By the time King led 25,000 demonstrators singing “We Shall Overcome” into Montgomery, the state capital, on March 25, the president of the United States had introduced the Voting Rights Act. Free at last-to vote. Roll credits.
Yet, just a few months ago, Martin Luther King asked me, “How long until African-American citizens of Alabama – and Mississippi and Georgia – get the unimpeded right to vote?”
Obviously I was not speaking with King Jr. – a bullet stole him from us in 1968. The question was posed by his son, Martin Luther King III. I spent an afternoon at his home in Atlanta, where we pored over the latest evidence that Americans of color were blocked at the doors to the polls in the 2014 midterm elections””by the hundreds of thousands.
As King’s 6-year-old daughter serenaded us with her toy drum set, we dived into a massive, secretive database used by elections officials – almost all of them Republicans – in 28 states. The scheme, called “Interstate Crosscheck,” threatens to disqualify the ballots of over a million voters, overwhelmingly citizens of color.
It took six months for my investigations team, in coordination with Al-Jazeera America, to get its hands on the names of those tagged for the voting rights slaughter.
According to the GOP officials, these citizens had voted twice in the same election, in two different states – a federal crime. As punishment, their mail-in ballots would be junked and their registrations annulled. But no reporters had seen (or, for that matter, asked for) the lists. State officials, the modern-day equivalents of Bull Connor, refused our requests on grounds that these Americans were all suspects in a criminal investigation and therefore the files were confidential.
Nevertheless, we managed to get hunks of the lists – 2.1 million names of a total 3.5 million “suspected double voters.”
Who are these criminal voters? A typical example: Kevin Antonio Hayes of Durham, N.C., allegedly voted a second time in Virginia as Kevin Thomas Hayes. The Durham Hayes, however, swears to me that he has never used the alias Thomas or set foot in Virginia. Another: James Elmer Barnes Jr. of Georgia allegedly voted a second time as James Cross Barnes III of Arlington, VA.
The lists go on like that: huge numbers accused solely on the basis of sharing a first and last name with a voter in another state.
It is clear what attracts Republican Katherine Harris wannabes to this absurd method of
Greg Palast’s
Billionaires & Ballot Bandits – The Movie
is currently in full production
Support the film  by making a tax-deductible donation and earn a screen credit

identifying fraudulent voters. The prevalence of name-sharing among black Americans is a legacy of slavery. The “Crosscheck” name-match game is also a darn good way of knocking off Hispanic voters. (According to the national census, at least 91.5 percent of Americans named Aguirre are Hispanic and, according to Gallup, two out of three vote Democratic).
I was suspicious – if Kevin Hayes really voted twice, authorities should have arrested him. They should have arrested 589,393 “criminal double voters” in North Carolina alone. But they busted none. Nevertheless, the officials got what they wanted: For example, enough voters of color were blocked, purged and disqualified to help knock a Democrat out of the U.S. Senate this past November.
This situation deeply concerns Martin Luther King III, founder of the Realizing the Dream Foundation. Fifty years after Bloody Sunday and the Voting Rights Act, he said, “The irony is that when you look at Mississippi, Georgia, Alabama, North Carolina, South Carolina, where you have significant African-American populations – Mississippi close to 50 percent – those states still have leadership that is totally Republican.” 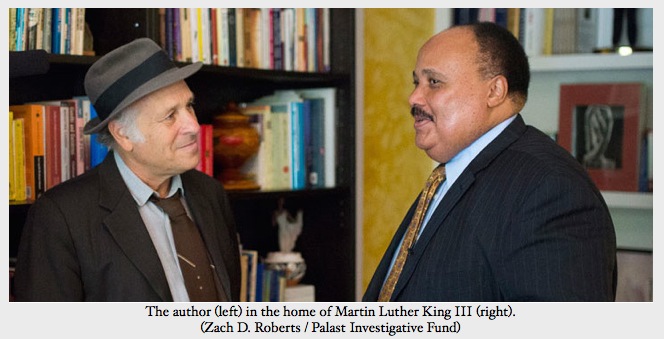 The black vote should have turned those states solid Democratic blue. What happened?
Meet the New Jim Crow. Fifty years ago, African-Americans were kept from the polls by the threat of beatings and lynchings. Today, Jim Crow has traded in his white sheets for spreadsheets. He’s Dr. James Crow, systems analyst. His method is lynching by laptop.
At the end of the film “Selma” we are told that the brutal, racist county sheriff Jim Clark was tossed out of office by newly enfranchised black voters. True. But today, Dr. James Crow has a magic machine that can reverse the Voting Rights Act.
Here’s one example uncovered by Robert F. Kennedy Jr.: On the night of Nov. 5, 2002, it appeared that Alabama’s Democrat Gov. Don Siegelman, the favorite of the African-American voters, had won re-election. But at 11 p.m., the white, Republican elections officials of Baldwin County declared they needed to recount the ballots. The county courthouse doors were locked. No press (or black Democrats) were allowed inside. By dawn, the white officials announced they had corrected a “glitch” in the count. Upon recounting, the tally for Siegelman dropped miraculously by 6,334 votes, handing the race to his opponent.
Could we see the ballots? Of course not; they were simply tallies on computer files. The files had been “corrected” – and Siegelman, the choice of the black voter, was gone.
(Siegelman was warned not to complain. He did – and before long he was imprisoned on corruption charges that Kennedy dismisses as “laughable, ginned up by a cast of crooked GOP attorneys.”)
Purging phantasmagorical “double voters” and finding thousands of votes in magical computer systems are but two of the methods at Dr. James Crow’s disposal. Working with Kennedy, I’ve counted nine sophisticated, racially dubious methods for blocking the black vote, costing – by a conservative estimate””5.9 million Americans their voting rights.
Despite the glorious story of the Selma march, the truth is that the USA and Old Dixie in particular are marching backward over the bridge. Disenfranchisement – a fancy word for ballot-box apartheid – is worsening, especially since June 2013 when the U.S. Supreme Court nullified key provisions of the Voting Rights Act.
It would be wrong and demeaning to the memories of those who gave their lives to this cause – including the fathers of King and Kennedy – to say that we’ve won no voting rights victories. This weekend we can congratulate ourselves on America’s great strides against racism at the ballot box. But let’s remember that Dr. King had to lead a dangerous march from Selma for voting rights that were supposedly guaranteed a century earlier by the 15th Amendment to the Constitution – rights won after 600,000 Americans fought to their deaths between Bull Run and Gettysburg.
The struggle for civil and human rights did not begin 50 years ago, and it will not end in another 50. It is a centuries-long story of advance and retreat.
And that’s the lesson. The movie’s over, but not The Movement. It is left to us to march over the bridge again. And again. And again.
*   *   *   *   *
Greg Palast is the author of the New York Times bestsellers Billionaires & Ballot Bandits, The Best Democracy Money Can Buy, Armed Madhouse and Vultures’ Picnic. Palast’s writings on racially-biased vote suppression tactics received the December 2014 Sidney Hillman award for investigative reporting.
Support Palast’s renewed investigation into the return of Jim Crow voting tactics.
Palast is a Puffin Foundation Fellow for Investigative Reporting.
Subscribe to Palast’s Newsletter and podcasts.
Follow Palast on Facebook and Twitter.
www.GregPalast.com