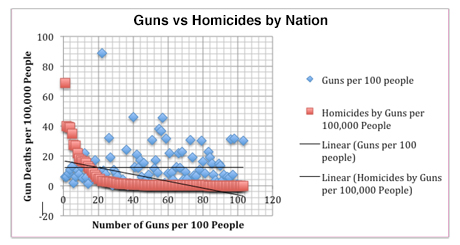 A crucial factor about the Florida killer: his family had to move out of the school district because they couldn’t afford the rent. Resentment yields anger. Not every poor kid becomes a killer think Bill Clinton but there will be one. Inequality kills.
A student of statistics my son was surprised by his regression analysis of gun ownership per capita in each nation versus homicides.
He wrote, “The result of my scatter plot came as quite the surprise to me: there was just about no correlation between number of guns and number of gun homicides.”
In fact, “the correlation coefficient was -0.105871699.” That is, by a small amount, more guns meant fewer homicides.
So what DID prove a strong correlation? Homicides versus the “GINI” coefficient. GINI is the measure of income inequality in a nation.
I’ve just returned from the nation with the widest gun ownership in the world, Switzerland, which has vanishingly few homicides although almost all men 18-35, due to ancient military tradition, must keep weapons in their home (many fully automatic).
The nation with the same population as Switzerland, Honduras, has the world’s highest homicide rate yet Honduras outlaws personal gun ownership.
David Hemenway, of the Harvard School of Public Health notes, “Switzerland and Honduras are not even close to being the same in many aspects of their society that will influence the levels of violence and homicide.”
Exactly. Want to end gun violence? End violent inequality.
Here’s the roster of the world’s most violent nations measured by non-military homicides:

It’s also a listing of the world’s most economically unequal nations.
After the US, here is the list of highest per capita gun ownership: Switzerland, Finland, Sweden, Norway, France, Germany Austria, Iceland all nations with tiny small homicide rates and very low GINI scores. Iceland, where a huge one-third of households have guns, is the most economically equal society on the planet with a homicide rate of ZERO.
(And before your all scream at me because I’m simply telling you the facts, I will add that these nations with lots of guns and few or zero homicides all maintain strict gun SAFETY rules. In Switzerland, deadly weapons in your home must be safely LOCKED AWAY.)
As a journalist, you will have to take these facts from my cold, dead hand.

The cause of this drop-off? #SB202 limits dropboxes to no more than 1 per 100,000 active voters. This limit affects ONLY the 4 large Greater Atlanta (59.7% non-white) counties. The law shuttered 77% of Atlanta-area dropboxes, declining from 107 to 25. https://www.gregpalast.com/justice-dept-told-to-end-georgia-dropbox-segregation/

From the 2020/2021 elections to November 2022, mail-in ballots in #Georgia plummeted by over 1 million, a breathtaking 81% loss of ballots — concentrated in Black-majority urban counties. https://www.gregpalast.com/mail-in-ballots-in-georgia-plunged-by-1-million-2/

The people we spoke to in #Atlanta told us that the lines have tripled, not because of higher voting but because it was a practical impossibility under the new law to mail in your ballot. #SB202 https://www.gregpalast.com/raphael-warnocks-in-real-trouble/