It’s been five years already. In New Orleans, more than half the original residents have not, cannot, return.

“They don’t want no poor niggers back in – that’s the bottom line.”

And that’s Malik Rahim, Director of Common Ground, who led the survivors who rebuilt their homes in the teeth of official resistance in “The City That Care Forgot.”
You’ll meet Malik and the people that everyone forgot in Big Easy to Big Empty: the Untold Story of the Drowning of New Orleans, chosen this week as Moviefone’s top pick of Katrina documentaries.
Donate and get the signed DVD with added material, including Palast with Democracy Now‘s Amy Goodman.

Meet Patricia Thomas who was locked out of her home in the Lafitte housing project near the French Quarter. We go with her as she breaks into her blockaded apartment.

“Katrina didn’t do this. Man did this.”

– Ivor Van Heerden, Deputy Director of the Louisiana State University’s Hurricane Center, reveals that the Bush White House knew the levees were breaking up and hid that information from the state.

“FEMA knew at eleven o’clock on Monday that the levees had breached, at 2 o’clock they flew over the 17th St. Canal and took video of the breaches, by midnight on Monday the White House knew, but none of us knew.”

After revealing this to our film crew, and more, Van Heerden was fired. 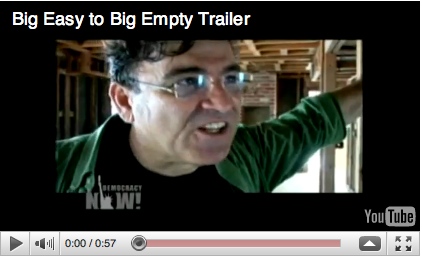 – Brod Bagert, a former New Orleans City Councilman, takes us to a neighbor’s house where 5 bodies were found. Standing inside the sticks that were once his own home, Bagert tells us,

“Old ladies watched as water came up to their nose, over their eyes, and they drowned in houses just like this, in this neighborhood because of reckless negligence that is unanswered for.”

– Pamela Lewis, who had guns shoved in her face when she tried to evacuate with her 86 year old mother, was dumped over 100 miles from the city to one of FEMA’s trailer parks fenced in with barbed-wire.

“It is a prison set-up. I’ve never been to the bottom of the barrel until I came here.”

The trailer park is just a short breathing distance from the Exxon Oil Refinery. Big Easy filmmakers Greg Palast and Matt Pascerella captured it – and were charged under the anti-terrorism laws by the Department of Homeland Security. (Thanks for the public ruckus that sprang us.)
– Stephen Smith tells us how he closed the eyes of an elderly man who died of dehydration while waiting with Stephen on a bridge for four days, while helicopters passed overhead.
Donations will fund our return to the Gulf to hunt down what may be the prime culprit in the drowning of New Orleans. We don’t want to reveal names, but its initials are “BP.” Click here: The Arctic to Amazon Investigation
*********
Greg Palast is an investigative reporter for BBC Newsnight and the author of Armed Madhouse and The Best Democracy Money Can Buy.
Subscribe to Palast’s Newsletter and podcasts.
Follow Palast on Facebook and Twitter.
GregPalast.com