“Use of Crosscheck risks severe, discriminatory disenfranchisement of registered voters in violation of federal law.”

Last month, the NAACP and League of Woman Voters filed a lawsuit to put an end to the state of Indiana’s use and abuse of Crosscheck.
Their evidence:  the findings of the Palast Investigations team, our sleuths and our statisticians are cited throughout as the solid factual back-up for their suit to stop the wrongful removal of tens of thousands of voters of color in that state.
(Crosscheck is that secret hit list of 7 million Americans crafted by Kris Kobach, Trump’s “Elections Integrity” czar.  The list, targeting minority voters was discovered and uncovered by the Palast team.)

Get your name in the movie credits
of Palast’s updated, post-election edition of
The Best Democracy Money Can Buy: The Case of the Stolen Election

The NAACP cites our statistics, including our calculation that Crosscheck threatens to wipe out the voting rights of

“one in six Latinos, one in seven Asian-Americans, and one in nine African- Americans.”

Forget the Pulitzer.  The NAACP’s legal citation is the best prize of all.
This suit is the first our work will be launching, ultimately gunning for all 28 states in Kobach’s vote suppression operation.
In Illinois, the ACLU and Indivisible have mounted a legal and legislative attack on Crosscheck and need our unique database of facts. We will get it done.
Other groups, from the NAACP to PFAW and the Civil Rights Center of Washington are counting on our team to investigate, update and propagate through our films and print reports the latest in these vote suppression tactics.
We couldn’t be happier.  One of the legal teams in Virginia is asking us to help with the technical discovery process.  We’ll do that.
Rev. Jesse Jackson has asked for a special update of our film, The Best Democracy Money Can Buy, to show in 1,000 churches.  Done!
Requests for a special activist version of our film from 67 college organizations; the list of requests goes on.  And we will say YES to it all. 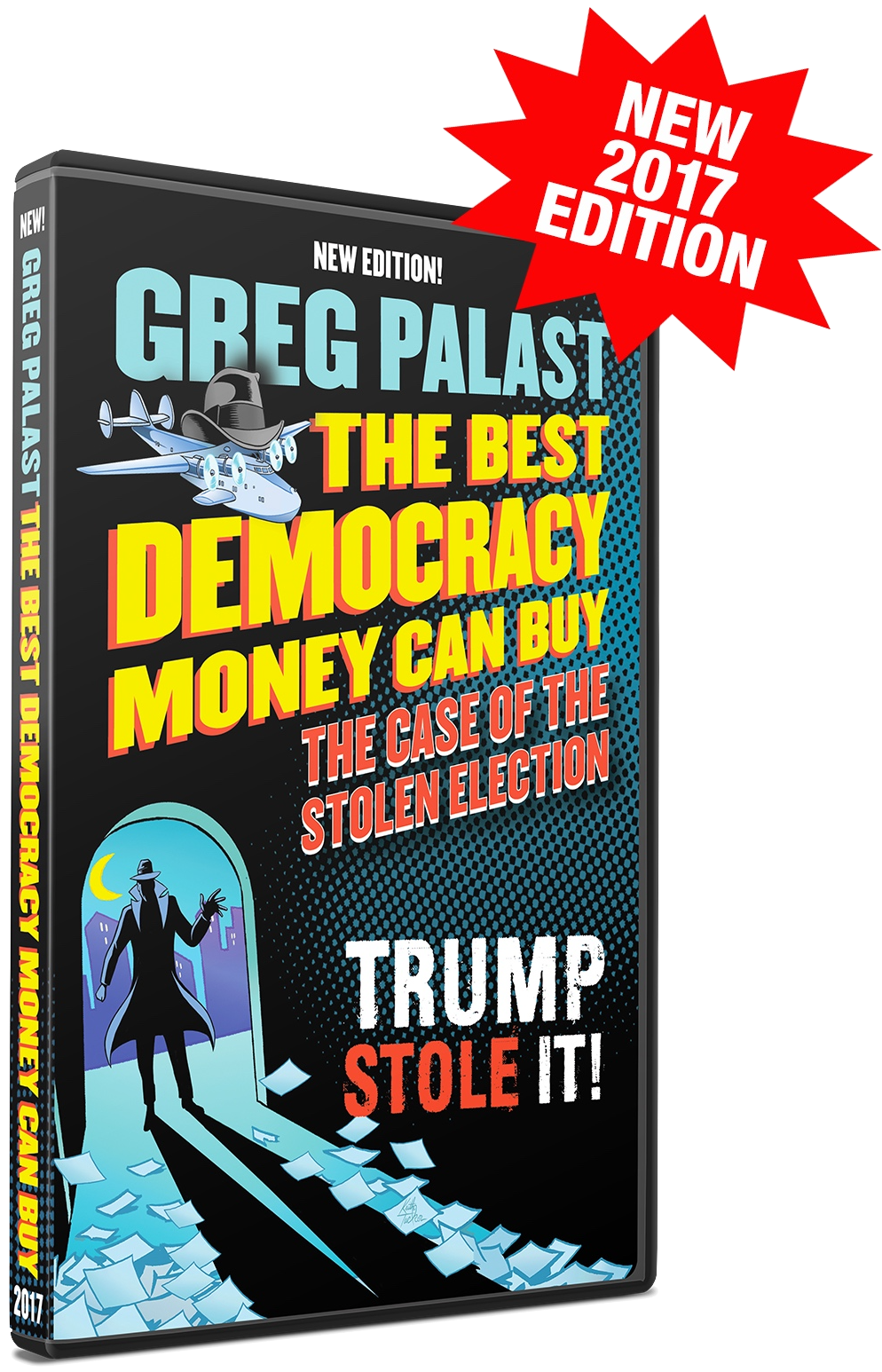 … But we need your help.

Our updated, post-election edition of the film is ready and about to go to print.
It’s the new “The Best Democracy Money Can Buy.”  Our new subtitle:  “The Case of the Stolen Election.”
This is your chance to get your name in the credits and support our vital work.
Donate a $1,000 – and we’ll add your name to the movie credits as a Producer ($500 for Co-Producer) of the updated DVD.
For a tax-deductible donation of $100, we’ll list you in the movie credits as a Supporter, and send you both a signed DVD and download link.

If you can’t swing that you just get the signed DVD of the updated, post-election edition for a donation of $50 or support our work for any amount no matter how large or small.
[If you’ve already donated for a producer or supporter credit, worry not, you’re on this one-though a little extra help would be truly appreciated.
There’s a deadline:  Sunday midnight, Sept 24, to get on the DVD credits.
Updating the film to show exactly how Trump lost was not easy, and certainly not cheap.  Your donations got us in the air to Michigan, Ohio, Georgia, and Washington-and the bills pour in.
NOTE: The updated film will NOT be available on Amazon (or any retail site) until next year-but you can get the update NEXT WEEK, with your name in the credits, as a download, and get the NEW DVD by the end of the month.

And speaking of busted:  two arrested for the Charlottesville beating.
We are thrilled to say that, based on the photos taken by our team’s brilliant and gutsy photographer, Zach D. Roberts, two of those who assaulted African-American school teacher De’Andre Harris, have been arrested.  Dan Borden, who beat Harris with a four-foot hunk of lumber, and Michael Ramos, who beat Harris with brass knuckles, have both been taken into custody.
Unfortunately, despite our pleas to the FBI, little has been done to track down the neo-Nazi who threatened Zach and Harris’ friends with a Glock 9mm semi-automatic.

*  *  *  *  *  *
Greg Palast (Rolling Stone, Guardian, BBC) is the author of The New York Times bestsellers, The Best Democracy Money Can Buy and Billionaires & Ballot Bandits, out as major motion non-fiction movie: The Best Democracy Money Can Buy: The Case of the Stolen Election (the brand new, updated, post-election edition).
Stay informed, get the signed DVD, a signed copy of the book companion –  or better still, get the Book & DVD combo.
Visit the Palast Investigative Fund store or simply make a tax-deductible contribution to keep our work alive! Alternatively, become a monthly contributor and automatically receive Palast’s new films and books when they’re released!
Or support the The Palast Investigative Fund (a project of The Sustainable Markets Foundation) by shopping with Amazon Smile. AmazonSmile will donate 0.5% of your purchases to the Palast Fund and you get a tax-deduction! More info.
Subscribe to Palast’s Newsletter. Follow Palast on Facebook and Twitter.
GregPalast.com