By Tim Damos, News Republic
Greg Palast doesn’t pull any punches.
His investigative stories are written in classic muckraker style; hard-hitting in both the juiciness they uncover and the language they use.
Author of the New York Times best sellers “Armed Madhouse” and “The Best Democracy Money Can Buy,” Palast has become a familiar face at Fighting Bob Fest, the annual gathering devoted to carrying on the progressive spirit of the late Wisconsin Congressman and Gov. Robert “Fighting Bob” La Follette.
WATCH Palast’s keynote speech at the Barrymore Theater on September 10, 2010.
WATCH Palast’s talk at the outdoor 2010 Fighting Bob Festival in Baraboo, WI on September 11, 2010. 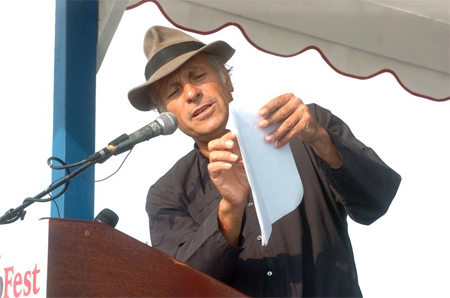 For Palast, serious investigative journalism is not about projecting an image of objectivity by presenting both sides of an argument in a “he said, she said” story. It’s about getting down in the trenches, relentlessly seeking truth and relaying it to readers untainted by any “spin.”
“Impartial is not failing to say it like it is or to provide the information,” Palast said in a phone interview Thursday, adding that many American mainstream reporters are afraid to pursue stories that are “threatening to (the elite’s) agreed upon view of the world. “If you’re out of that channel, if you’re out of their stream, they say, you’re out of the mainstream.”

Palast studied economics at the University of Chicago and has investigated corporate fraud. He wrote a book commissioned by the United Nations called “Democracy and Regulation,” about how essential public services are being turned over to private companies to the detriment of ordinary citizens.
Among other stories, Palast is known for his reports on how thousands of African-Americans were improperly purged from the voter rolls in the state of Florida prior to the 2000 presidential election by a database company hired by the state.
“On BBC television, you turn to the camera and you say, ”˜They have illegally removed innocent voters from the voter rolls and that elected George Bush,’ and you can say that right to the camera and that’s at the top of the news because that’s the truth,” Palast said. “Your job is not to say, ‘Well on the one hand someone says this and on the other hand someone says that …’ You’re the reporter. Go find out.”
This Saturday, in front of a grandstand audience, Palast will make his third appearance at Fighting Bob Fest.
“I’m going to tell some stories that people don’t know about British Petroleum,” Palast said. “I’m going to tell stories about oil that people don’t know, including how John Kennedy stopped the U.S. and British militaries from invading Iraq in 1963. That’s an important story; the war we didn’t have with Iraq.”
FightingBob.com Editor and Publisher Ed Garvey said much of the discussion at Saturday’s event will be focused on a recent U.S. Supreme Court decision that overturned restrictions on corporate funding in political campaigns.
The decision will allow corporations to “absolutely control the political process,” Garvey said. “They can accumulate hundreds of millions of dollars, and dropping $5 million into the U.S. Senate race in Wisconsin is no big deal for them.”
That will make it harder for candidates who don’t have access to big corporate money to win elections, he said.
Civil rights leader and Rainbow PUSH Coalition founder Rev. Jesse Jackson, Sr., will be one of Saturday’s keynote speakers along with retiring U.S. Rep. David Obey, D-Wis. Jackson also will be honored for his 50 years of fighting for justice and equality.
Saturday’s list of speakers also includes radio commentator and author Jim Hightower, Mike McCabe of the Wisconsin Democracy Campaign, and progressive radio talk show host Thom Hartmann.