A federal judge heard arguments Thursday from voting rights groups that are challenging the removal of what they said were hundreds of thousands of eligible voters from Georgia’s voting rolls last year.

U.S. District Judge Steve C. Jones did not make a ruling Thursday but said he would release his decision “as quick as possible.”

The lawsuit was filed in U.S. District Court in Atlanta by the Black Voters Matter Fund, the Transformative Justice Coalition and the Rainbow Push Coalition. Attorneys for the secretary of state’s office asked Jones to dismiss the case.

“We’re in a state of John Lewis, Dr. (Martin Luther) King — we stand on the shoulders of great titans,” said Tricia “CK” Hoffler, an attorney for the Black Voters Matter Fund. “If one person, if two people don’t have the ability to vote and were purged improperly, that’s one or two people too many. And the secretary of state made the mistake.”

Lawyers for the Black Voters Matter Fund argued that the state removed tens of thousands of voters from the list because it believed they had moved out of their county or the state when, in fact, they had not. It also challenges a “use it or lose it” provision in state law that allows Georgia to purge voters who do not cast ballots for many years. That allowed the state to remove tens of thousands more voters, attorneys argued.

They want those people who were purged returned to the voter rolls.

Attorneys for the secretary of state’s office said the office followed all federal guidelines in updating voter registration rolls and, if there were issues with people being removed inappropriately, the plaintiffs had a year to bring their case.

“Voters have had almost a year to reregister,” said Bryan Tyson, an attorney for the secretary of state’s office. “The absentee ballots for Jan. 5 went out on Nov. 21. And so we are now at the point of, if we made these changes now, we interfere with an ongoing election.”

Georgia maintains a database of millions of registered voters. It must keep the list up to date to prevent anyone ineligible to vote in Georgia from casting a ballot. It removes voters from the list if they have died, moved away, been convicted of a felony or failed to vote or contact election officials for many years.

Last fall Georgia removed about 287,000 voters from the registration list. The lawsuit says nearly 200,000 of those people were improperly removed and seeks to have their registrations restored.

The lawsuit is based on a report [by Investigative journalist Greg Palast] released by the American Civil Liberties Union in September. At the time, the secretary of state’s office called it “misinformation” and demanded the group release its data or retract its report. 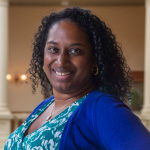 Maya T. Prabhu joined The Atlanta Journal-Constitution in 2017 to cover Georgia government and politics. Her reporting focuses on gambling and abortion legislation, criminal justice and social issues and the 2020 legislative races. Born in Queens, N.Y., and raised in northern Virginia, Maya received her bachelor’s degree from Spelman College before heading back to the D.C. area to get a master’s from the University of Maryland. Maya previously reported for The Post and Courier in Charleston, S.C., where she also covered state government and politics. Before that, Maya wrote for newspapers and online news organizations in South Carolina and Maryland. After many years away, she was excited to make her way back to Atlanta. Maya also moved around a lot as a kid and an adult, enabling her to live in seven of the states represented by flags flying at Liberty Plaza at the Capitol. And, as anyone who follows her on Twitter would know, Maya loves a good awards show and, an avid member of the Beyhive, has near-encyclopedic knowledge of all things Beyoncé.