In this week’s Fact Injection, host Cary Harrison and resident reporter Greg Palast explore the strange case of Chevron oil versus Steve Donziger ahead of Donziger’s sentencing on October 1, 2021.

Harrison: Welcome to Harrison’s Reality Check. Cary Harrison with you. It is now time for our Fact Injection, something we tee off the show with. It is of course with none other than investigative reporter, Greg Palast. You’ve seen him on Democracy Now!, you’ve read his book, The Best Democracy Money Can Buy, here now is investigative reporter Greg Palast with the Fact Injection. The topic today is the strange case, you’re going to love this, Chevron oil versus Steve Donziger. What, Greg, is that all about?

Palast: Well, you have to go back with me in a canoe up an Amazon river tributary, deep into the Ecuador Amazon rainforest, where I met, for BBC Television, with Chief Emergildo Criollo of the Cofan indigenous tribe.

Criollo told me that his three-year-old son had gone swimming in a pool of water that had shine on it and came up vomiting blood and died in his arms. His older son, right after that, died of leukemia. What was going on? A Chevron Texaco unit was dumping oil sludge from its drilling into the waters of the Amazon around the Cofan indigenous villages.

I went with Criollo, the Chief, as he filed a lawsuit in the middle of the jungle in this courthouse. Now, you have to understand they were laughing at him, ‘cause this guy’s naked from the waist up, he’s wearing feathers… he looks like he’s out of a jungle film from the ‘50s and he’s filing a $9.5 billion lawsuit against Chevron oil for the deaths of his sons.

In 2011 he won $9.5 billion. He won the case and his secret weapon was a guy named Steve Donziger, a U.S. lawyer who went to Harvard Law School with Barack Obama. But instead of cashing in, he has spent his life working for free for the Cofan indigenous people and the other natives of the Amazon.

Now, Chevron didn’t pay. They moved all their assets out of Ecuador and they claimed the case was fixed.

Harrison: Well, it sounds like they fixed it themselves… The question is obvious, was Chevron actually guilty? There was a $9.5 billion judgment, but was Chevron guilty?

Palast: Well, the court records were really voluminous and clear. They had all the experts from the university medical centers. And my own investigation, I’d stuck a stick in those ponds and pull up oil sludge, and I saw the people with pustules all over their arms from the poisoning. 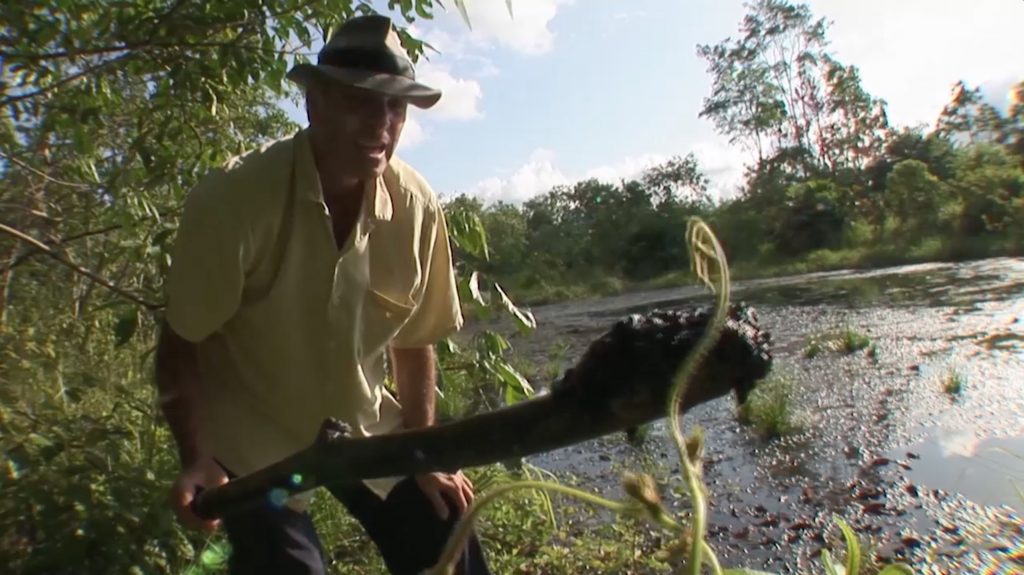 Palast in the Amazon with Chevron’s poisonous, murderous sludge.

And I found a document myself from the president of Chevron-Texaco, who literally ordered his people to remove all documents involving sludge and destroy them. His words: “Destroy them”. In the U. S. that’s called obstruction of justice.

So what did Chevron do? They went after the Cofan’s lawyer, Steve Donziger, in a U.S. courtroom. They went around judge shopping and they found a right-wing judge, and this judge found Donziger — believe it or not, not Chevron, but Donziger — in contempt of court. Which is normally no big deal, you’d pay a few bucks fine. But instead this judge charged Donziger millions of dollars in legal fees, bankrupting him, and then the judge charged him with criminal contempt to throw him in prison.

Now I have to say that the Trump administration — even the Trump Justice Department — laughed this off, saying you can’t stick a lawyer jail ’cause he didn’t turn over his iPhone. Because he wouldn’t turn over his iPhone, which had the numbers of people [witnesses and whistleblowers], this is dangerous in Latin America. You can’t give away your witnesses. So the Trump Justice Department said this is B.S., but the judge told Chevron oil to act as the prosecutor in this contempt trial. It’s the first time in U.S. history a private corporation is prosecuting a U.S. citizen — in fact the guy that they’re opposing. Now look, no jury is going to convict him. So the judge said, there’s no jury trial. I know, you’ve probably read the Constitution…

Harrison: My ancestors helped write it, as a matter of fact, so I also have contempt for that particular court.

Palast: Yeah. You’re supposed to have a jury trial… but they didn’t and the judge found him guilty. And now, here’s what I’m concerned with, on October 1st this judge is going to sentence Donziger to prison. He could get six months. And on top of it, Donziger has already served two years of time under house arrest. He’s been wearing one of those ankle bracelets in his home like he’s a Mafia don. This has never happened in American history. So I want to just tell people, here’s what you can do… Number one, you get a hold of the U.S. Justice Department, our so-called Attorney General, Merrick Garland and tell him, Mr. Garland, no more corporate prosecutions. And, needless to say, get that ankle bracelet off Steve. You don’t put a lawyer in jail, a human rights lawyer who dedicated his life to defend others. Make Chevron pay and no more corporate prosecutions. And if you want more information about this case and what’s happening to Steve Donziger go to freedonziger.com or watch my actual report from the rainforest.

Listen to this week’s Reality Check, in which Palast sits in Harrison’s hosting seat and interviews Steven Donziger and his friend, Confessions of an Economic Hit Man author John Perkins on SoundCloud or via the player below. 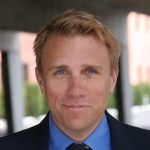 Harrison was spawned from the Mayflower and Abe Lincoln on his mother’s side and signers of the Declaration and Constitution on the other. Placed into Who's Who in 2020, Cary strongly believes in democratizing media and propelling a strong voice for free-flowing, accurate information. An award-Winning Radio Host and media producer, Cary founded VIPwebinars.org which features international talent from Nobel Prize nominees to Pulitzer Prize-winning authors and speakers - offering their "insider" knowledge on a full range of life's often-difficult issues.