Look at his face. Emergildo Criollo, Chief of the Cofan people of the Amazon in Ecuador. Determined, dignified, in war paint, bare-chested. 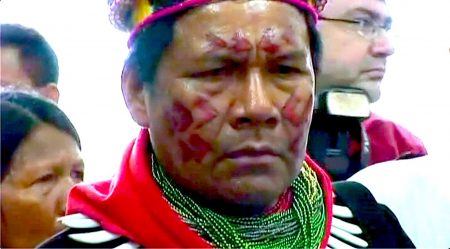 It was back in 2007, when I found him in his thatched stilt home in the rainforest. Criollo told me his 3-year-old son had jumped into a swimming hole, covered with an enticing shine. The shine was oil sludge, illegally dumped. His son came up vomiting blood, then dropped dead in the Chief’s arms.

I followed him to the courthouse in the dusty roustabout town of Lago Agrio (Bitter Lake) where, with a sheaf of papers, Criollo sought justice for his son.

Behind Criollo, the court clerks, in their white shirts and ties, were giggling and grinning at each other, nodding toward this “indio” painted up and half naked, thinking he can file a suit against a giant. A giant named Chevron.

In 2011, they stopped laughing. That’s when an Ecuadorian court ordered Chevron to pay Criollo and other indigenous co-plaintiffs $9.5 billion. The courts found that Chevron’s Texaco operation had illegally dumped 16 billion gallons of deadly oil waste. 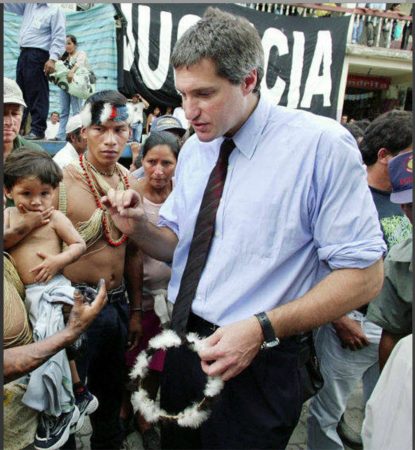 What the gigglers didn’t know is that the Chief had a secret weapon: Steven Donziger, a US attorney, classmate of Barack Obama at Harvard law, who gave up everything — literally everything — to take on Criollo’s case.

It’s been a decade, and Chevron still hasn’t paid a dime. But Donziger has paid big time: For the last two years, he’s been under house arrest, longer than any American in history never convicted of a crime.

But weeks ago, he was convicted of contempt by a judge who denied him a jury. (The Constitution? Faggedaboudit.) And on October 1, this contemptible judge will sentence Donziger, and could put him behind bars.

Who was the prosecutor? Not the US government, but Chevron’s law firm. The first-ever criminal prosecution by a US corporation.

I can’t make this up.

Chevron set out to destroy Donziger, to make an example of a human rights lawyer that dares take on the petroleum pirates.

They filed suits against Donziger and the Cofan and found a former tobacco industry lawyer judge Lewis Kaplan to find Donziger in contempt for refusing to turn over his cell phone and computer to Chevron — an unprecedented attack on attorney-client privilege. To give Chevron the names of indigenous activists in South America can be a death sentence.

When Donziger said he’d appeal, the judge charged him with criminal contempt — that’s simply unprecedented. But a far more dangerous precedent was set. When federal prosecutors in New York laughed off and rejected Kaplan’s demand that they charge Donziger, the judge appointed Chevron’s lawyers, Seward & Kissel, working with Gibson Dunn & Crutcher, to act as the prosecutors!

So far, 60 Nobel Laureates, several US Senators and Congresspeople, and a Who’s Who of human rights groups have publicly registered their horror at this new corporate prosecution. (Note: Gibson Dunn represented me. Never again. I’ve taken the trash to the curb.)

Chevron also went after journalists, in one case, filing a complaint against the BBC Television reporter that broke the story that Chevron had destroyed key evidence in the case. I was that reporter — and survived with my job after a year of hearings. But Chevron’s prosecution did a damn good job of scaring off other journalists.

Some were scared off; some bought off. PBS News Hour wouldn’t touch the death-by-oil story. The official chief sponsor of the PBS News Hour? Chevron.

Here’s the story, broadcast by BBC and, in the US, by Democracy Now!, the story you won’t find on the Petroleum Broadcast System. 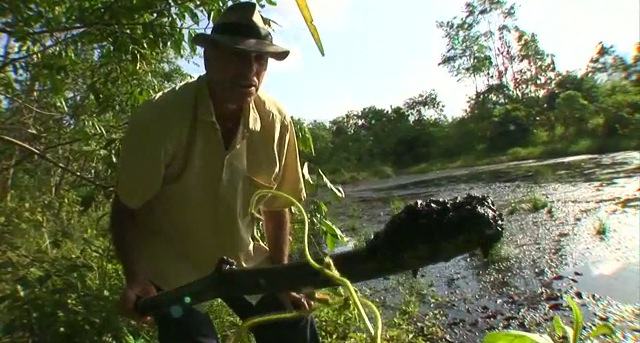 I’ve gone way out of my way to get ChevronTexaco’s side of the story. I finally chased them down in Ecuador’s capital, Quito. I showed them a study of the epidemic of childhood leukemia centered on where their company dumped oil sludge. Here’s their reply:

“And it’s the only case of cancer in the world? How many cases of children with cancer do you have in the States?”

“Scientifically, nobody has proved that crude causes cancer.”

OK, then. But what about the epidemiological study about children with cancer in the Amazon traced to hydrocarbons?

The parents of the dead kids, he said, would have some big hurdles in court:

“If there is somebody with cancer there, they must prove it is caused by crude or by the petroleum industry. And, second, they have to prove that it is OUR crude.”

Perez leaned over with a huge grin.

“Which is absolutely impossible.”

He grinned even harder.

Maybe some guy eating monkeys in the jungle can’t prove it. And maybe that’s because the evidence of oil dumping was destroyed. 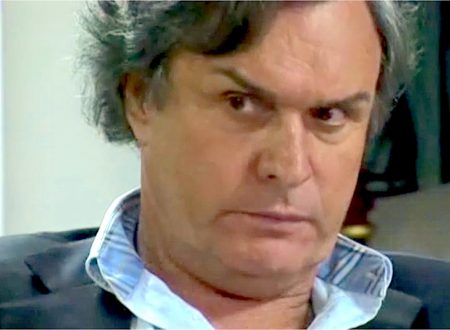 I passed the ChevronTexaco legal duo a document from their files labeled “Personal y confidential.” They read in silence. They stayed silent quite a while. Jaime Varela, Chevron’s lawyer, was wearing his tan golf pants and white shoes, an open shirt and bespoke blue blazer. He had a blow-dried bouffant hairdo much favored by the ruling elite of Latin America and skin whiter than mine, a color also favored by the elite.

Jaime had been grinning too. He read the memo. He stopped grinning. The key part says,

“. . . Reports . . . are to be removed from the division and field offices and be destroyed.”
It came from the company boss in the States, “R. C. Shields, Presidente de la Junta.”

Removed and destroyed. That smells an awful lot like an order to destroy evidence, which in this case means evidence of abandoned pits of deadly drilling residue. Destroying evidence that is part of a court action constitutes fraud.

In the United States, that would be a crime, a jail-time crime. OK, gents, you want to tell me about this document?

“Can we have a copy of this?” Varela asked me, pretending he’d never seen it before in his life.
I’ll pretend with them, if that gets me information. “Sure. You’ve never seen this?”

The ritual of innocence continued as they asked a secretary to make copies. “We’re sure there’s an explanation,” Varela said. I’m sure there is. “We’ll get back to you as soon as we find out what it is.”