The Election Was Stolen – Here’s How…

Before a single vote was cast, the election was fixed by GOP and Trump operatives.
Starting in 2013 – just as the Supreme Court gutted the Voting Rights Act – a coterie of Trump operatives, under the direction of Kris Kobach, Kansas Secretary of State, created a system to purge 1.1 million Americans of color from the voter rolls of GOP-controlled states.
The system, called Crosscheck, is detailed in my Rolling Stone report,
“The GOP’s Stealth War on Voters,” 8/24/2016.

On Tuesday, we saw Crosscheck elect a Republican Senate and as President, Donald Trump.  The electoral putsch was aided by nine other methods of attacking the right to vote of Black, Latino and Asian-American voters, methods detailed in my book and film, including “Caging,” “purging,” blocking legitimate registrations, and wrongly shunting millions to “provisional” ballots that will never be counted.

The Best Democracy Money Can Buy, which was based on our Rolling Stone report (“The GOP’s Stealth War On Voters“), was first released 2 months BEFORE the 2016 election. It predicted Trump would steal the White House – and explained how! The film’s massive success has led to lawsuits in Indiana and Illinois aimed at ending Crosscheck and demands from the NAACP, ACLU, Transformative Justice Coalition for a post-election update. Subtitled, “The Case of the Stolen Election”, the film is available NOW with a tax-deductible donation to support our work.

Trump signaled the use of “Crosscheck” when he claimed the election is “rigged” because “people are voting many, many times.”  His operative Kobach, who also advised Trump on building a wall on the southern border, devised a list of 7.2 million “potential” double voters-1.1 million of which were removed from the voter rolls by Tuesday. The list is loaded overwhelmingly with voters of color and the poor. Here’s a sample of the list
Those accused of criminal double voting include, for example, Donald Alexander Webster Jr. of Ohio who is accused of voting a second time in Virginia as Donald EUGENE Webster SR. 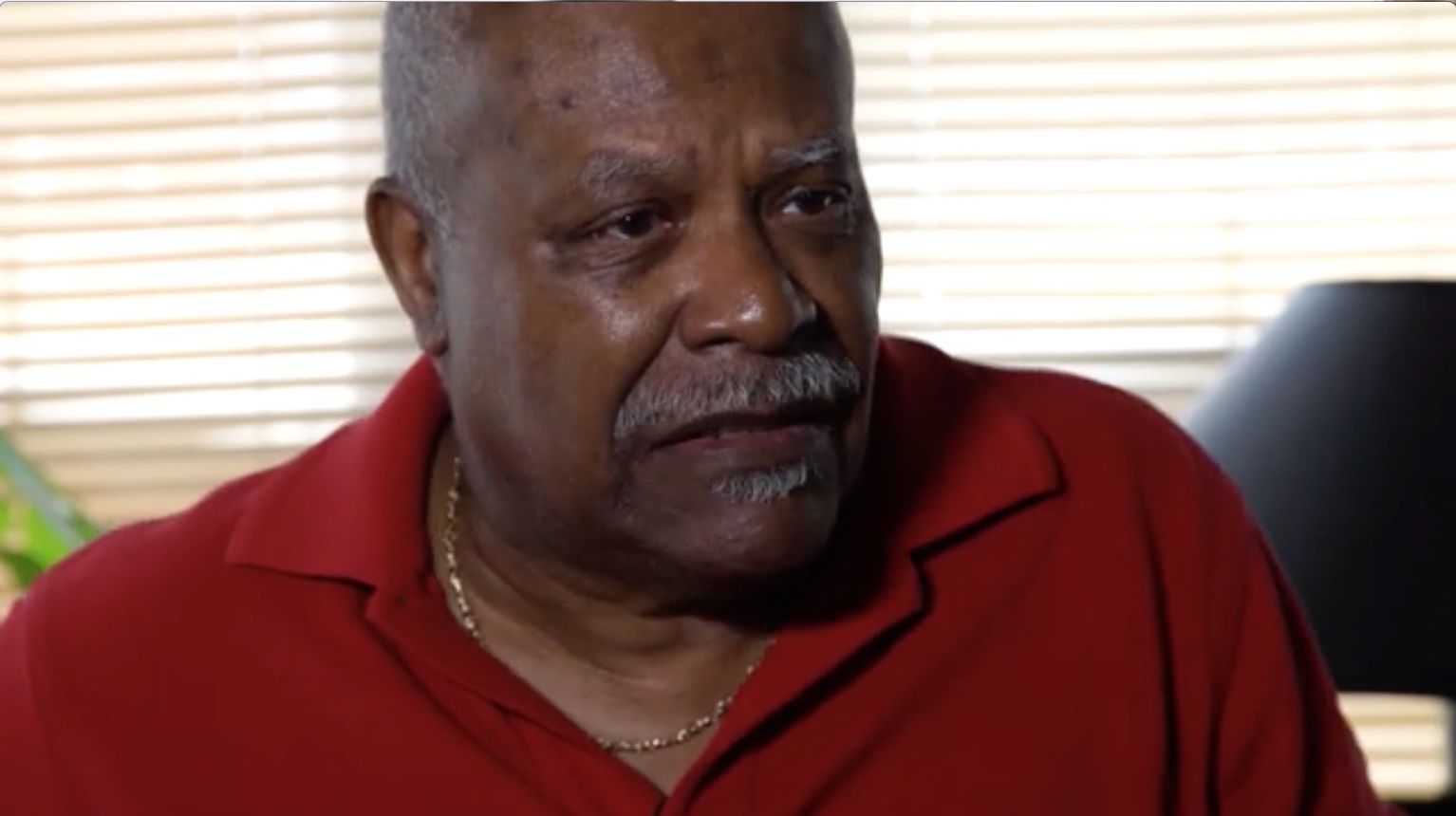 Note: Watch the four-minute video summary of Crosscheck. The investigation and explanation of these methods of fixing the vote can be found in my book and film, The Best Democracy Money Can Buy: a Tale of Billionaires & Ballot Bandits (2016).

No, not everyone on the list loses their vote.  But this was not the only racially poisonous tactic that accounted for this purloined victory by Trump and GOP candidates.
For example, in the swing state of North Carolina, it was reported that 6,700 Black folk lost their registrations because their registrations had been challenged by a group called Voter Integrity Project (VIP). VIP sent letters to households in Black communities “do not forward.”  If the voter had moved within the same building, or somehow did not get their mail (e.g. if their name was not on a mail box), they were challenged as “ghost” voters.  GOP voting officials happily complied with VIP with instant cancellation of registrations.
The 6,700 identified in two counties were returned to the rolls through a lawsuit.  However, there was not one mention in the press that VIP was also behind Crosscheck in North Carolina; nor that its leader, Col. Jay Delancy, whom I’ve tracked for years has previously used this vote thievery, known as “caging,” for years.  Doubtless the caging game was wider and deeper than reported.  And by the way, caging, as my Rolling Stone co-author, attorney Robert F. Kennedy Jr., tells me, is “a felony, it’s illegal, and punishable by high fines and even jail time.”
There is still much investigation to do.  For example, there are millions of “provisional” ballots, “spoiled” (invalidated) ballots and ballots rejected from the approximately 30 million mailed in.  Unlike reporting in Britain, US media does not report the ballots that are rejected and tossed out-because, after all, as Joe Biden says, “Our elections are the envy of the world.”  Only in Kazakhstan, Joe.
While there is a great deal of work to do, much documentation still to analyze, we’ll have to pry it from partisan voting chiefs who stamp the scrub lists, Crosscheck lists and ballot records, “confidential.”
But, the evidence already in our hands makes me sadly confident in saying, Jim Crow, not the voters, elected Mr. Trump.
What about those exit polls?
Exit polls are the standard by which the US State Department measures the honesty of foreign elections.  Exit polling is, historically, deadly accurate. The bane of pre-election polling is that pollsters must adjust for the likelihood of a person voting.  Exit polls solve the problem.
But three times in US history, pollsters have had to publicly flagellate themselves for their “errors.”  In 2000, exit polls gave Al Gore the win in Florida; in 2004, exit polls gave Kerry the win in Ohio, and now, in swing states, exit polls gave the presidency to Hillary Clinton.
So how could these multi-million-dollar Ph.d-directed statisticians with decades of experience get exit polls so wrong?
Answer:  they didn’t.  The polls in Florida in 2000 were accurate.  That’s because exit pollsters can only ask, “How did you vote?”  What they don’t ask, and can’t, is, “Was your vote counted.”
In 2000, in Florida, GOP Secretary of State Katherine Harris officially rejected 181,173 ballots, as “spoiled” because their chads were hung and other nonsense excuses.  Those ballots overwhelmingly were marked for Al Gore.  The exit polls included those 181,173 people who thought they had voted – but their vote didn’t count.  In other words, the exit polls accurately reflected whom the voters chose, not what Katherine Harris chose.
In 2004, a similar number of votes were invalidated (including an enormous pile of “provisional” ballots) by Ohio’s GOP Secretary of State Kenneth Blackwell.  Again, the polls reflected that Kerry was the choice of 51% of the voters.  But the exit polls were “wrong” because they didn’t reflect the ballots invalidated by Blackwell.
Notably, two weeks after the 2004 US election, the US State Department refused the recognize the Ukraine election results because the official polls contradicted the exit polls.
And here we go again. 2016: Hillary wins among those queried as they exit the polling station-yet Trump is declared winner in GOP-controlled swings states. And, once again, the expert pollsters are forced to apologize-when they should be screaming, “Fraud!  Here’s the evidence the vote was fixed!”
Now there’s a new trope to explain away the exit polls that gave Clinton the win.  Supposedly, Trump voters were ashamed to say they voted for Trump.  Really?  ON WHAT PLANET?  For Democracy Now! and Rolling Stone I was out in several swing states.  In Ohio, yes, a Black voter may have been reluctant to state support for Trump. But a white voter in the exurbs of Dayton, where the Trump signs grew on lawns like weeds, and the pews of the evangelical mega churches were slathered with Trump and GOP brochures, risked getting spat on if they even whispered, “Hillary.”
This country is violently divided, but in the end, there simply aren’t enough white guys to elect Trump nor a Republican Senate.  The only way they could win was to eliminate the votes of non-white guys-and they did so by tossing Black provisional ballots into the dumpster, ID laws that turn away students-the list goes on.  It’s a web of complex obstacles to voting by citizens of color topped by that lying spider, Crosscheck.

*****
Before turning to journalism as an investigative reporter for The Guardian and BBC Television, Greg Palast was an investigator of fraud and racketeering for governments and labor unions worldwide. His investigations have appeared in Rolling Stone, Harper’s and New Statesman. Known as the reporter who exposed how Katherine Harris and Jeb Bush purged thousands of Black voters from Florida rolls to steal the 2000 election for George Bush. Palast has written four New York Times bestsellers, including Armed Madhouse, Billionaires & Ballot Bandits, and The Best Democracy Money Can Buy, now a non-fiction movie about how Donald Trump, racist vote suppression tactics and the billionaires behind it all.
Stay informed, get the signed DVD, a signed copy of the companion book – or better still, get the Book & DVD combo.
Visit the Palast Investigative Fund store or simply make a tax-deductible contribution to keep our work alive! Alternatively, become a monthly contributor and automatically receive Palast’s new films and books when they’re released!
Or support the The Palast Investigative Fund (a project of The Sustainable Markets Foundation) by shopping with Amazon Smile. AmazonSmile will donate 0.5% of your purchases to the Palast Fund and you get a tax-deduction! More info.
Subscribe to Palast’s Newsletter. Follow Palast on Facebook and Twitter.
GregPalast.com