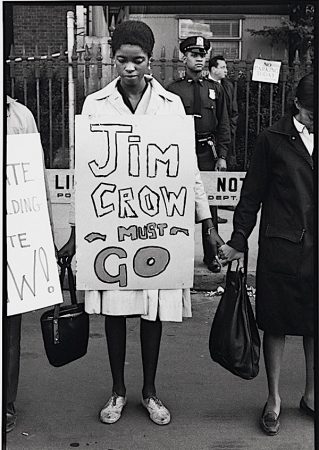 You didn’t hear this in the cable TV chatter: In the two years leading up to this election, Georgia’s GOP secretary of state quietly wiped away the voter registrations of 198,351 voters — based on false information.

Call it “The Great Purge” — overwhelmingly wiping away the voting rights of young voters and voters of color. In other words, voters who might be more likely to vote blue.

I’m not guessing the number of wrongly purged voters. I directed a team of experts that identified each victim voter for a report issued by the ACLU of Georgia, titled, “Georgia Voter Roll Purge Errors.” (Rather than read this technical report, you can just watch the movie, The Purged: The Vanished Voters of Trump’s America, a 14-minute flick hosted by Leonardo DiCaprio.) Our expert team, working with Black Voters Matter, a 501(c)4 group dedicated to expanding Black voter engagement, discovered the same game had been played with the voter rolls of Michigan, North Carolina and threatened voters in Wisconsin.

It’s no coincidence that these are the states with “surprisingly” lower totals than expected for Joe Biden.

Here’s how the purge game got started. Two years ago, the Supreme Court’s right-wing five authorized a new method of “cleaning” voter rolls. The Court agreed with GOP voting officials, beginning with Ohio and Georgia, to purge voter rolls of those who “moved.”

The idea sounds fair in theory: If you don’t live in Atlanta, you shouldn’t vote there, and to do so is a felony crime. But in practice, reality does not line up with officials’ claims. At an Atlanta poll, I met Christine Jordan, a 94–year–old who had just been tossed out of the poll. Records said she’d moved, but I went to her home where she showed me photos of her cousin, Martin Luther King, Jr., having dinner with her in that home half a century ago.

In Wisconsin, I met Sequanna Taylor, accused of moving from Milwaukee. Unlikely: Taylor is a Milwaukee County Supervisor! But Jordan, Taylor, and the hundreds of purged voters we filmed and called almost all had one thing in common: They were guilty of voting while Black, or voting while Latinx, Asian American or a student.

Though Michigan has now been called for Biden, we saw the same game there. The rolls were “cleansed” of 313,000 voters, many victims of an older purge scheme called “Interstate Crosscheck.” For Democracy Now!, I confronted the Republican Secretary of State’s spokesman with his secret purge sheet showing that the state had removed thousands of voters with names like Garcia and Brown on grounds they were registered in other states.

The GOP purge operation claimed that Michael Kelly Brown of Georgia is the same voter as Michael Wayne Brown of Michigan. Yet, most of the Michael Browns and José Garcias lost their votes.

Biden has taken Wisconsin. And that’s thanks to new Lt. Gov. Mandela Barnes, who made this ugly vote suppression tactic an issue — and so far, blocked The Purge in that state.

Michigan? Despite warnings from the Black Voters Matter Fund and others, the new Democratic leadership of the state simply looked at its shoes and whistled. The purged remained purged, putting Michigan into the potential steal zone.

President Trump has said he’s going to court because, “We want all voting to stop.”

We think he meant “stop the count.” This is an attempt to prevent counting mail-in ballots in Pennsylvania, which were postmarked by Election Day but received during this week. 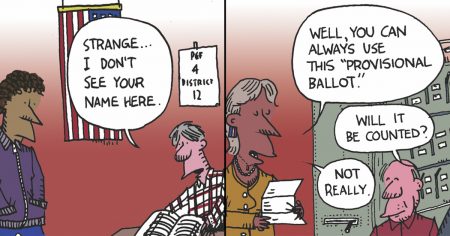 I’ve been warning about the dangers of going postal for 12 years. No, the problem is not, as Trump bleats, “fraudulent” ballots mailed in from Venezuela. Rather, according to a study by MIT, as many as 22 percent of absentee ballots are never counted. It’s absurdly easy to lose your mail-in ballot to postage due (100,000 tossed in 2016), scotch tape on the envelope, a “naked” ballot (you must cover one envelope with another) or a challenge to your signature, or simply, late because of a post office delay. The Coronavirus sent the number of mail-in ballots through the roof, heavily tilting Democratic, as Trump voters appear to be unconcerned about getting infected.

How will it all shake out? I don’t know, I don’t have a crystal ball. But this much is clear: Jim Crow is stalking this election.

Joe Biden, in the first debate said, “He [Trump] cannot stop you [the voters] from being able to determine the outcome of this election.”

Yes, Joe, it won’t be up to Trump to stop the count. According to Article II of the Constitution, that’s up to Pennsylvania’s legislature and the interpretation of Article II by Justice Amy Coney Barrett.