The idea of ERIC was to expand voter registration. If you moved, they would follow you and say, hey, would you like to register in your new state? That’s very good. That’s very progressive. In fact, a bunch of liberals from the Pew Trust and Brennan Center came up with it. But now a number of Republican Secretaries of State have taken it over and inverted it. Instead of asking people, would you like to register, they’re using the ERIC lists, which are often wrong, to remove voters by the millions, basically creating a Crosscheck replacement.

I did an investigation for Black Voters Matter in Wisconsin, where Joe Biden’s victory margin was only 20,000 votes in 2020. Before the election, they were going to remove 130,000 voters from the rolls. We went through the ERIC-generated lists and found just short of 40,000 people had never moved — a minimum 25.8% error rate. Almost every person at risk in Milwaukee was in a black census district, while those in Madison were mostly students — their only crime was either being a student or voting while Black.

Biden would’ve lost Wisconsin if the ERIC purge was allowed to go through. In 2020, after presenting our evidence in a report with Black Voters Matter, we managed to get the Wisconsin Supreme Court to block the Wisconsin purge, but now ERIC’s back and active in more states than ever! 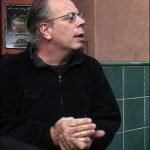 The Boy Who Lived @young_tibby ·
3h