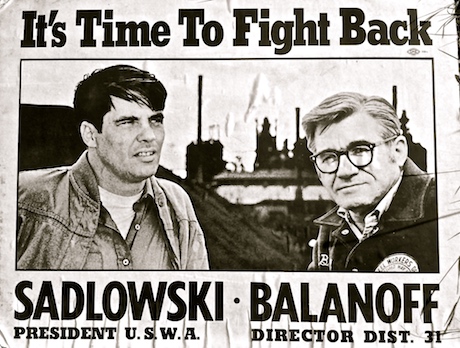 [Above: Edward Eugene “Oil-can” Sadlowski,
September 10, 1938 – June 10, 2018.]
Eddie Sadlowski was a machine oiler at U.S. Steel Southworks. In 1976, he led a workers’ rebellion to take control of the million-person United Steelworkers of America. (Back then, workers were united and America made steel.) Oil-can Eddie was America’s working-class hero, back then, when America was working. He’d been profiled on 60 Minutes. The University of Chicago Business School thought it cute to bring him to the ivy-decorated campus to lecture, with his rough hands and Local 1110 windbreaker, so the yuppies-in-training could make fun of the workers’ monkey trying to speak English.
Sadlowski stunned them, his brain racing beyond them. But it was their decade, with Reagan rising, and they would close Southworks, then bury both Eddie and his union. I didn’t know that then and I’m glad I didn’t.
Sadlowski ended his performance by looking out over the packed auditorium, saying, “Is Greg Palast here?”
Heads turned. Mine, too. Huh?
“Yeah, you. You Greg Palast? Meet me downstairs.”
OK. In the basement coffee shop, I got us two Styrofoam cups and lots of sugar, and without even a hello, Sadlowski said, “Rosen told me where I could find you. Teddy Smolarek says you’re a genius.”
He said it like, “You’re the guy who has the tire size I’m looking for.”
Sadlowski told me that this big-shot politician, a Boss Daley Machine hack on the South Side, was running against a decent lady who cared about steelworkers. The union needed info on the Machine’s candidate.
Sadlowski said, “He’s a crook.”
I asked how he knew the guy was a crook.
The entire 240 pounds of Polish steelworker leaned in to me. “You’re the genius. You tell me!”
* * *
Two weeks later, through some BS story I used about a research paper, I got my hands on the bids for county emergency roadwork. There it was: the Machine’s boy was the costliest bidder for the job. He still got the contract. Excited with the stone-cold evidence of corruption, I gave the story to CBS. Which buried the story and the corrupt politico got elected to Congress a lesson in American “news” that I’d get again and again and again for the next 40 years.
Whatever, that was my first real investigation. I didn’t know it, but this side of beef of a mechanic was handing me my life across a plastic folding table.
* * *

I will, Eddie.
Story of Oil-Can Eddie from Vulture’s Picnic by Greg Palast (2011). “Carry It On” by Eddie’s friend, Pete Seeger.