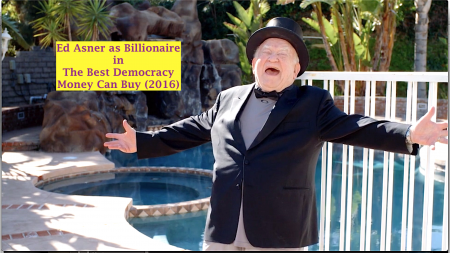 The death squads had just executed Maryknoll nuns, bullets to the back of the head.

It was the Reagan-sponsored war on “communists” in El Salvador, Nicaragua and Afghanistan.

Ed Asner, an actor who wasn’t particularly political, agreed to attend a press conference denouncing the killing of the nuns.

Within short order, his network canceled Lou Grant, the number one show on American TV, in fact, #1 worldwide.

Ed once told me he could’ve kissed the network’s ass, promised to be a good on-stage puppet, an off-stage mute, and save his career which was now on the new Black List.

But he couldn’t. Couldn’t stay silent. Instead, Ed grew louder.

And unstoppable.  At dinner this week, Ed told me he was preparing to open in three new one-act plays.

I wish she weren’t always right.

I remember when we were about to film Ed in The Best Democracy Money Can Buy. I deliberately hadn’t revealed his lines to him, nor his costume: a ridiculous Santa suit.

Ed was a good sport about it.  And a “one-take” wonder. But, we needed several takes, a bit too long for his 80-something’s bladder. So, rather than halt the production, he said, “The heck with it!”, let go, then simply dropped his soaking pants and continued the shoot in his boxers.

So, that’s how we shot the next scene: Ed Asner in a top hat and underpants. Absolutely brilliant. Take a look.

For inspiration at the shoot, Ed asked our Executive Producer Leni Badpenny if he could think of her naked. Hey, he only said what every guy thinks. Her response was to sit on his somewhat damp lap. (By the way, he was thrilled when he learned we married.) 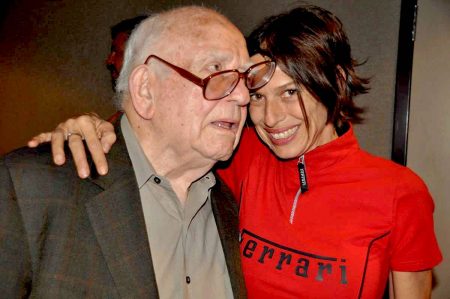 And take a listen to learn why Asner was recognized as the best voice actor on the planet. This is his reading of my investigation of Wal-mart, “What Price a Storegasm?”

And here, the Network soliloquy that Ed gamely voiced for Armed Madhouse.

Asner was an actor of great talent because he was a man of great feeling.  He would allow nothing to get between his emotions and the words he would express. It was true fearlessness, a courage and inner power that came through even in a sitcom or in a Santa suit.

There’s no guessing where it came from.  A working class Jewish kid from Kansas City, child of the Depression and the incipient Holocaust which most Americans, Left and Right, were happy to ignore, and a fierce union man from early on. Ed only became an actor, he told me, because he lost his job in the steel mills.

Before I got the call that Ed was gone, it was already a lousy morning.

I was deeply upset about the people of Afghanistan whom we’d just abandoned to the Islamists executioners, the very killers Reagan had unleashed alongside the death squads of El Salvador.

And, frankly, I’ve been afraid that I’d be shunned by progressive friends and editors who are breaking out the party hats to celebrate the end of the “forever war.”

But I just can’t join the party.  Should I say something?  Death squads, Nazis, Taliban. Which victims am I allowed to speak for?

I’m an operational atheist.
I can’t turn to the Lord for advice.
But I can ask, What would Lou Grant do?

You’ll have my answer this week.