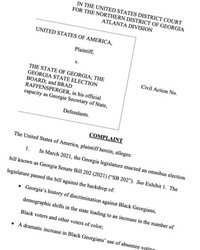 A three-month investigation by the Palast Investigations Fund for The Hartmann Report located hundreds of innocent voters at risk as well as the perpetrators of this mass voter suppression program.

While the much-lauded lawsuit filed on Friday by the Department of Justice against the State of Georgia is certainly worthy, the suit won’t do a damn thing about these 364,000 voters newly at risk.

One GOP official, Pamela Reardon, has personally challenged the right of 32,379 voters to have their ballots counted.

Warning: Reardon would like you to know that this reporter is, “An a**hole!”  [Catch the video, “Georgia: New Mass Voter Challenge by GOP Exposed”.]

Last month, Reardon invited me into her stately Marietta, Georgia, home for an on-camera interview.

Reardon, elegantly dressed in Nancy Reagan red, only became upset, or I should say unglued, after I showed her photos of Tamara Horne and Storm Saul. Horne and Saul are just two of the voters she has accused of voting using a false address—in other words, that they have, along with 32,000 others, committed a felony crime. 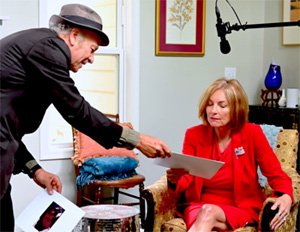 She told me, with confidence, that, “I know for sure that voters don’t live here.”

So, I asked Reardon, if she recognized a photo of Horne, an African-American.

“Do you recognize that woman?”

She responded, “Not off hand.”

“You never spoke to her?”

As to voter Saul, she did not contact him either to verify her accusation. But I did, visiting him at his home. I gave Reardon the opportunity to explain her attack on Saul’s vote, putting him on speakerphone while our cameras rolled.

Horne, who lost her job during the Covid peak, had moved in with her family nearby, in Cobb County. In Georgia, as in most states, a citizen doesn’t lose their right to vote if they move within their county.

But these facts hadn’t stopped Reardon, nor any of the other 87 operatives who have filed a breathtaking 364,000 challenges to Georgia voters.

We contacted scores of challenged voters, all stunned to find out they’d been accused of voting illegally, and now would have their ballots in future elections discarded.

I took the challenge list to Gerald Griggs, the Atlanta attorney known for his victories on behalf of the Georgia NAACP.

Reardon and her cronies’ wild, unverified accusations against a mass of voters, a list suspiciously heavy with voters of color, could run right into the Ku Klux Klan Act of 1871, opening her to suits by those she has wrongly accused. The law also provides for criminal penalties for intimidation of voters. It doesn’t matter that, instead of white sheets, the intimidation is done with spreadsheets. 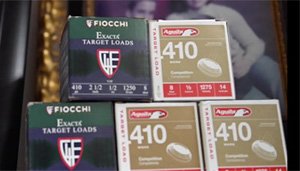 Reardon showed us her boxes of ammo and handguns on the coffee table and shotgun next to the front door. (Photo: Zach D. Roberts.)

When I asked Reardon if she was familiar with the KKK Act, she said, “I’m from Canada!” She invoked Canada again when I asked about other federal voter protection laws. (She is now a US citizen.)

Reardon, who was hoping for a puff interview about her candidacy for Vice-Chair of the State GOP, suddenly shouted, “Get out of my house!” — a request I quickly acted on, eyeing the shotgun leaning next to her front door and the handguns and ammo boxes on display.

Instead of goodbye, she said, “You’re an a**hole and shouted “F*** YOU!” through the door.

No, we haven’t disappeared. As you can see, we just went undercover. We need your help to complete this investigation of Georgia and save 364,000 voters, stop the ballot blocking disease from spreading to other states and expose the billionaires behind it all.

Behind the Georgia GOP, Texans and Billionaires

While Reardon wouldn’t tell us who gave her the voter hit list, we learned that the spreadsheets were generated by a Tea Party spin-off, True the Vote of Houston, Texas.

Most of the 88 challengers using True the Vote lists are Republican officials or activists. The Chairman of the Cobb County GOP himself added another 16,000 challengers to Reardon’s 32,000.

Georgia Republican Party Chairman David Shafer said in a press release, “The resources of True the Vote will help us organize and implement the most comprehensive ballot security initiative in Georgia history.”

That statement was quite an act of chutzpah. True the Vote is a 501(c)(3) supposedly non-partisan charity. Shafer’s boasting of the GOP’s coordination with True the Vote triggered a complaint with the Federal Elections Commission by Common Cause, still pending.

If True the Vote is behind the Georgia GOP challenges, who is behind True the Vote? Records show the Bradley Family of Wisconsin, right wing billionaires have loaded True the Vote with millions of dollars. This has permitted the group to provide fearsome legal counsel to Reardon and her fellow challengers: conservative legal star James Bopp, famous for his successful Citizens United suit.

True the Vote did not respond to several requests for an interview. 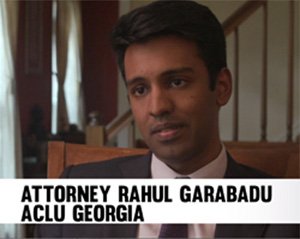 The ACLU of Georgia successfully blocked the first attempt by Reardon and other True the Vote shills when they challenged voters in December, just before the US Senate run-offs. According to ACLU of Georgia voting rights attorney Rahul Garabadu, the ACLU’s success was based on admonishing counties that Georgia law did not allow, “challenging hundreds of thousands of voters at one time.”

But now Georgia law does just that. SB 202 specifically allows any “elector” (that is, a voter) to challenge the qualifications of any other voter. And now, crucially, frighteningly:

“There shall not be a limit on the number of persons whose qualifications such elector may challenge.”

After Reardon confessed that she had not personally checked the facts about the voters she challenged, she changed her tune, saying she’d merely asked the County to “check” if the voters were legal residents. In fact, in a letter she sent to the County, she challenged each voter’s eligibility to vote. Through the Open Records Act, we obtained her letter to the County that states:

Please accept this letter as a challenge to the attached electors’ eligibility to vote …[T]hese electors appear to have permanently established other residence, as reflected in their change of address, to residential addresses outside of the Georgia county in which they are currently registered to vote.

But the ACLU’s Garabadu explained that this was not merely a request to check residence. Under Georgia law, Reardon’s challenge would prohibit the counting of ballots of these thousands of voters unless each one personally appears at their County registrars office and goes through a hearing in which they must prove they are who they are and live where they live.

Not only do few take the day from work to stand in line at a clerk’s office to save their one vote, Garabadu imagined the scene of thousands of voters crowding into these small offices “in the middle of a pandemic.”

Reardon’s GOP compatriot, Party Chairman Jason Shepherd added in his own filing, “I have evidence that there are 16,024 individuals registered to vote in Cobb County who reside outside the state of Georgia.” I tried to speak with Shepherd about how he personally verified each claim but he failed to answer my several requests for an interview. 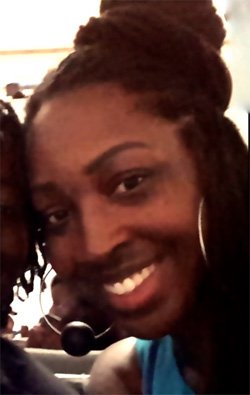 The DOJ kept to the easy and obvious stuff: the reduction in ballot drop boxes, making it a crime to hand out pizza to voters in long lines, onerous ID requirements just to ask for an absentee ballot and other voting procedure issues.

Why? The simplest explanation is that, until the release of the Palast Fund’s investigation this week, the GOP/True The Vote resurrection of their massive challenge had slipped under the radar, catching the feds and even local activists by surprise.

On Friday, Attorney General Merrick Garland, proclaimed, “We are scrutinizing new laws that seek to curb voter access and that where we see violations of federal law, we will act.”

Now, let’s see if Garland is ready to dust off the Ku Klux Klan Act and cuff the perpetrators of Georgia’s biggest vote suppression scheme yet.

* * * * *
For over 8 years, Palast has been investigating vote suppression in Georgia for Rolling Stone, Black Voters Matter and, for this investigation, The Thom Hartmann Program.
Georgia report produced and edited by David Ambrose for The Thom Hartmann Program and the Palast Investigative Fund. Videographer/Associate Producer: Zach D. Roberts.
Watch for Palast’s interview on Brian Ross Investigates.