Right now, there are multiple trials and judicial reckonings happening simultaneously across the US. Let’s do a quick update on each. 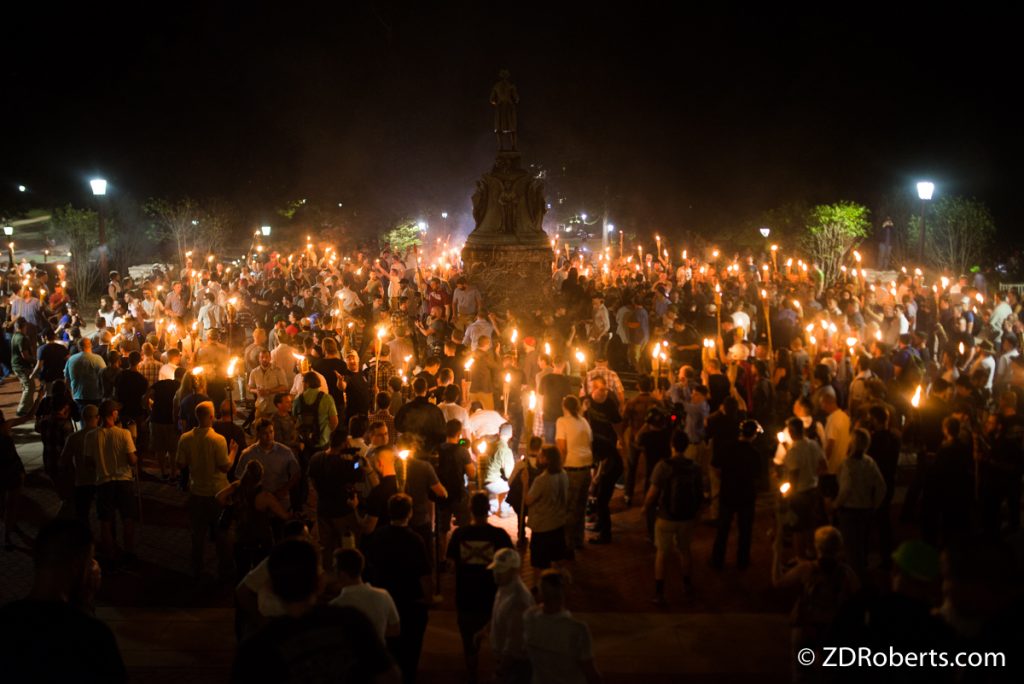 Far right marchers with Tiki torches surrounding a small group of anti-fascist “Antifa” demonstrators, attacking them with torches and pepper spray, at an event organized by Unite the Right on the University of Virginia’s Charlottesville campus on August 11, 2017.
Photo: © Zach D. Roberts, 2017.

In Charlottesville, Virginia the civil trial against the organizers of the deadly 2017 Unite the Right rally continues. I’ve written previously about the start of the trial here.

This is the last week of the four-week-long trial, and the plaintiffs’ lawyers, who represent a group of people who were physically or mentally injured during two days of terror in August, 2017, are making their closing arguments.

Unite the Right rally organizers Richard Spencer and Christopher Cantwell are representing themselves in court, offering little more than petty infighting in their defense, while trying desperately to lay blame on the other defendants, which include Jason Kessler, and white supremacy organizations such as Vanguard America, Identity Europa, League of the South, the National Front, the National Socialist Movement, and the Ku Klux Klan.

Kessler, who was the original organizer of the Unite the Right rally, has complained that other defendants, like Elliot Kline of Identity Europa, took over the organizing of the August 11 torch rally on the University of Virginia’s Charlottesville campus that ended with multiple injuries.

However, evidence, including private chatroom and discussion boards logs, show Kessler had violent intentions. In one particularly damning message he stated they “need a Battle of Berkeley” — referring to the violent protests on the University of California campus earlier in 2017.

The lawyers for the plaintiffs have laid out a strong case, using the defendants’ own words against them. They also brought in expert witnesses, such as historian and extremist expert Deborah Lipstadt, who famously won a libel case against Holocaust denier David Irving. She explained, in simple terms to the jury, what the often coded language of the extremists really means, later sparring with open anti-semite Cantwell, who is known to try and hide behind the claim that his comments are just jokes. Read her expert report here. 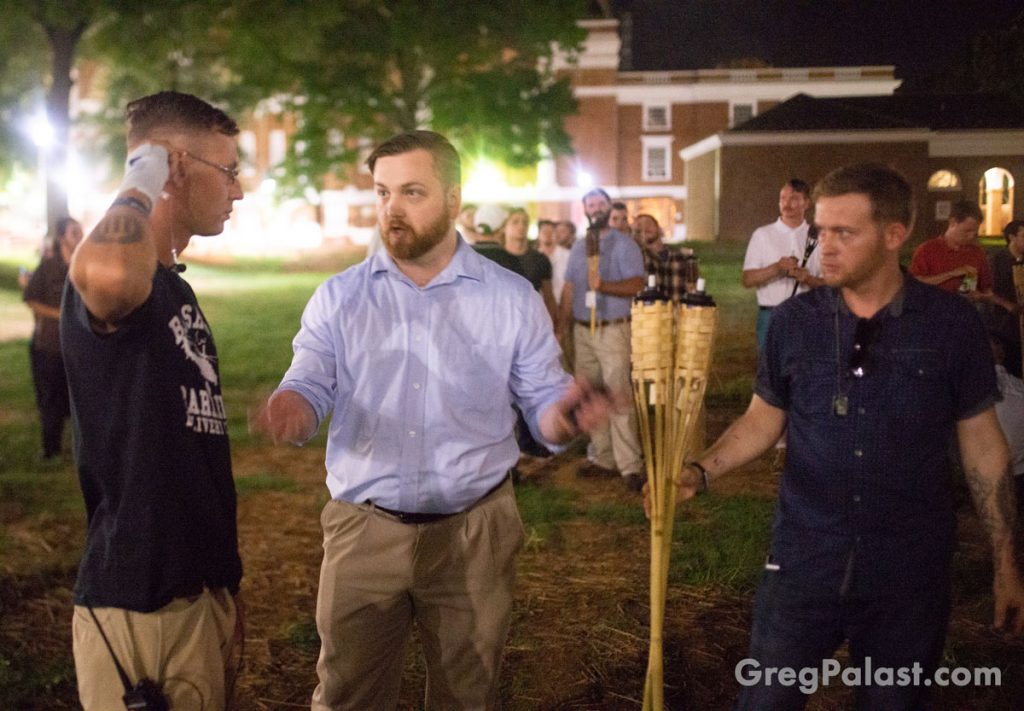 In Brunswick, Georgia three white men, Gregory McMichael, his son Travis McMichael, and their neighbor William “Roddie” Bryan are on trial for the aggravated assault and murder of Ahmaud Arbery. Arbery, a 25-year old black man, was jogging near his home when the three white men chased him down in their pickup trucks and attacked him. Eleven out of twelve jurors are white and the four alternatives are also white.

During the trial, defense attorney Kevin Gough made a racially charged complaint to the judge after Al Sharpton attended the trial in support of the Arbery family.

“If their pastor’s Al Sharpton right now, that’s fine,” said Gough. “But then that’s it. We don’t want any more Black pastors coming in here… sitting with the victim’s family, trying to influence a jury in this case.”

Gough has since made a similar appeal to the judge to ban Reverend Jesse Jackson from the courtroom.

Al Sharpton has called the killing a “modern-day lynching.” 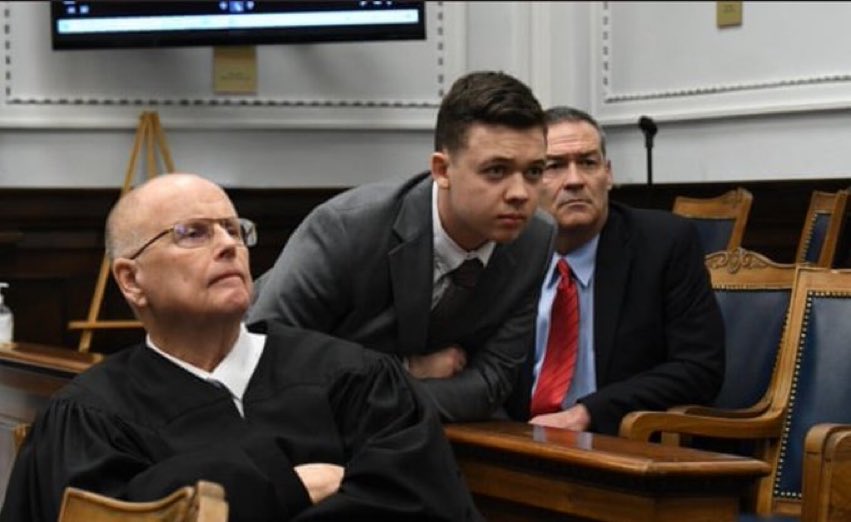 A picture is worth a thousand words: (l-r) Judge Bruce Schroeder, Kyle Rittenhouse, and his defense lawyer Mark Richards.

In Kenosha, Wisconsin Kyle Rittenhouse is on trial for shooting and killing two men, Joseph Rosenbaum and Anthony M. Huber, and injuring a third, Gaige Grosskreutz. Rittenhouse was just 17 at the time of the shooting, on August 25, 2020, which occurred during protests surrounding the police shooting of an African-American man named Jacob Blake.

Judge Schroeder, who is overseeing the Rittenhouse trial, has embraced the attention of the media this high profile case has attracted, and his clear bias has been a major talking point in the press. For example, during the trial, Schroeder refused to allow those shot by Rittenhouse to be referred to as “victims” — but would allow the Black Lives Matter supporters who were protesting the police shooting of Blake to be called “rioters”. And, if we were in any doubt as to Schroeder’s personal leanings, his phone rang several times during the trial playing Trump rally favorite “God Bless The U.S.A” by Lee Greenwood.

Through Schroeder has courted press coverage with his realty TV-style antics — such as allowing Rittenhouse to select the final 12 jurors from a pool of 18 by pulling names out of a tombola as if he were a game show host — the judge has also criticized what he perceives to be unfavorable coverage, admonishing CNN’s chief legal analyst Jeffrey Toobin, among others, from the bench.

There were seven charges initially against Rittenhouse, including first-degree reckless homicide, but over the last couple of days, the judge has dropped two of the lesser charges, including breaking curfew and possession of a dangerous weapon by a person under 18. According to the Associated Press, “Rittenhouse’s attorneys seized on a subsection of the Wisconsin law that states the ban on minors possessing dangerous weapons applies to minors armed with rifles or shotguns only if those weapons are short-barreled.”

The defense rested with Rittenhouse’s lawyer, Mark Richards, doing gymnastics with the truth and some prima facie victim blaming. “I’m glad he shot him,” said Richards, referring to his client, “because if Joseph Rosenbaum had got that gun, I don’t for a minute believe he wouldn’t have used it against somebody else. He was irrational and crazy.”

The jurors have begun their deliberations as I write this.

After being charged with two counts of contempt of Congress, because of his refusal to respond to subpoenas from the January 6th Commission, President Trump’s former Chief Strategist, Steve Bannon, turned himself in at an FBI office in Washington, DC.

Bannon did not make a plea and was released on personal recognizance stating “We’re going on the offense” outside the courtroom to the media scrum. He faces a minimum of 60 days in jail and a maximum of two years, and a $2,000 fine, but Bannon didn’t miss the opportunity to plug his podcast to the media. “We’re taking down the Biden regime…,” said Bannon, “every day the focus.”

Once advisor to the President, Bannon has of late been giving political advice to right-wing Youtube personalities. He will, no doubt, be milking this media attention as much as he can. 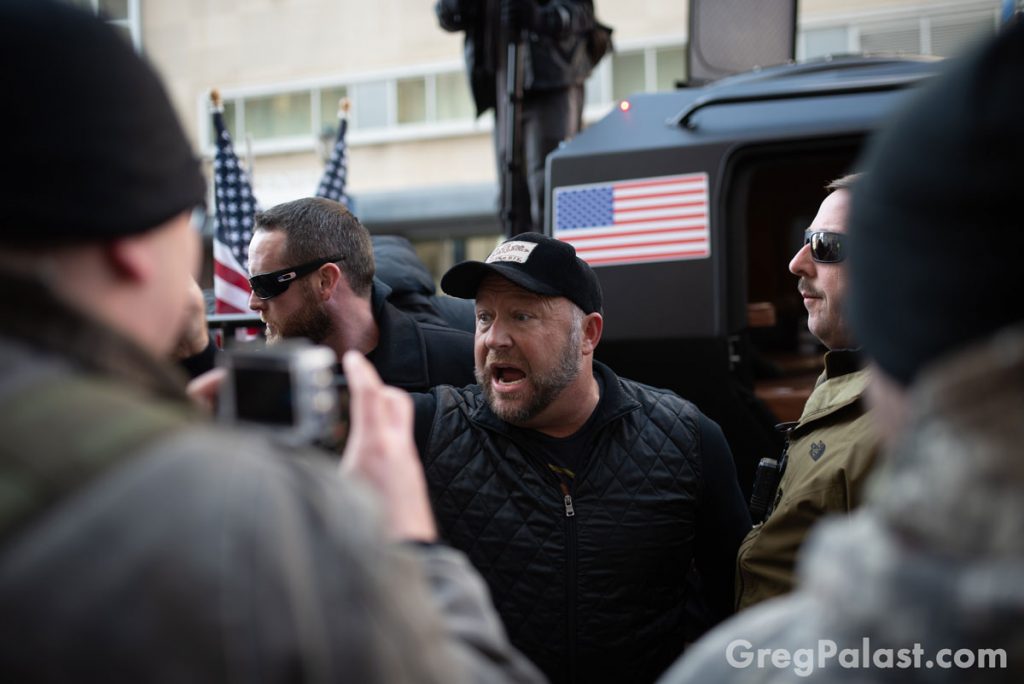 Right-wing broadcaster Alex Jones has been the subject of multiple defamation lawsuits brought by the families of children murdered during the mass shooting in Sandy Hook in 2012.

Jones, who seemingly believes that he is in a battle with the literal Devil, regularly used his popular online show as a platform for conspiracies, some of which he was the author of. Central to the Sandy Hook conspiracy theories was Jones’ claim that the children were not killed and were ‘crisis actors.’ Along with other guests on the show, Jones pushed his massive audience to contact the families of the victims and harass them, forcing some to go into hiding.

Citing “willful noncompliance” in the discovery process, on November 15, 2021 a judge in Connecticut found Jones liable by default in the lawsuits. CNN spoke to Chris Mattei who represents some of the families involved in the case who said, “While the families are grateful for the Court’s ruling, they remain focused on uncovering the truth. As the Court noted, Alex Jones and his companies have deliberately concealed evidence of the relationship between what they publish and how they make money.”

A jury will now deliberate the issue of damages.