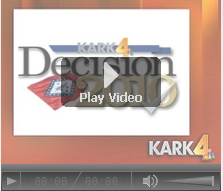 After two years, and several resignations among Department of Justice staffers, in July, a special prosecutor wrapped up her investigation of the nine U.S. Attorneys fired in 2006. Bud Cummins, a Republican from Arkansas, was one of the U.S. Attorneys fired. Tim Griffin, another Republican, and the current candidate for Congress in Arkansas was named as his replacement.
Though no criminal charges were filed, the report indicates, “the process used to remove the nine U.S. Attorneys in 2006 was fundamentally flawed.”
The report itself makes reference to Mr. Griffin’s alleged involvement with voter caging. Because of Mr. Griffin’s candidacy, we sat down with him to discuss the allegations. He told KARK he was not concerned about the Department of Justice report when he decided to run for Congress.

The first time Mr. Griffin made reference to voter caging was in June of 2007, when he spoke at the Clinton School, shortly after resigning his post as interim U.S. Attorney for the Eastern District of Arkansas. Mr. Griffin called the allegations completely and absolutely false.
“Caging, as you may know, I had to look it up, is a direct mail term for basically organizing returned mail,” said Griffin at the Clinton School.
Voter caging refers to the practice of sending direct mail to addresses on the voter rolls, compiling a list of addresses from which the mail is returned undelivered, and using that list to purge or challenge voters’ registrations on the grounds that the voters do not legally reside at registered addresses. In some cases, where it appeared to have a racial component, it has been declared illegal under the Voting Rights Act.
To understand the allegations against Mr. Griffin, we need to go back to 2004. During President Bush’s re-election bid against John Kerry, Tim Griffin was working as an opposition researcher for the Bush campaign.
Meanwhile, in the course of that campaign, award winning BBC reporter, Greg Palast had been investigating claims of voting caging in America.
We came across Mr. Palast, and his work, after doing various internet searches for Mr. Griffin. We spoke to Mr. Palast from his office in New York.
“In October, just before the election of 2004, around midnight, my office received a series of about 50 e-mails, which were meant to go from a gentleman inside the Bush campaign, named Tim Griffin,” said Mr. Palast to KARK.
Mr. Palast believes Mr. Griffin made a mistake. He says instead of sending the e-mails to georgebush.com, Mr. Griffin sent the e-mails to georgebush.org — a bogus website. He says the e-mails sent by Mr. Griffin contained attachments labeled caging, and when opened they appeared to be voter lists.
“I had to open up the e-mails and attachments and take them to experts to give me an idea of what we were finding,” said Palast. “When we went through it, we determined the list was racially biased. So if a soldier was sent to Iraq, and we called these families, they were legal voters, if they were sent overseas and they got a letter from Mr. Griffin’s group, they would lose their right to vote.”
During our interview, KARK asked Mr. Griffin about the allegations of members of the military being disenfranchised.
“Complete and absolute nonsense,” said Griffin.
We asked Mr. Griffin if the e-mails were sent by him. He told us they were and then explained why they were sent.
“Mary Poppins was registered to vote. Mighty Mouse or Mickey Mouse was registered to vote,” explained Griffin. “What the RNC was doing, and I worked for the RNC, but they were trying to highlight examples of registrations that were false.”
We asked Mr. Griffin why the attachments were labeled caging. Mr. Griffin responded by saying that caging is a direct mail term, and he went on to say the attachments were sent by the Florida party.
The issue of voter caging and Mr. Griffin’s alleged involvement was a matter of discussion during Senate and House Judiciary Committee hearings, which looked into the U.S. Attorney firings.
On February 6, 2007, Senator Mark Pryor made his concerns known about Mr. Griffin to members of the Senate Judiciary Committee.
Griffin was appointed as interim U.S. Attorney, through a provision in the Patriot Act, which allowed appointment without senate confirmation. During his testimony, Senator Pryor said he addressed the voter caging allegations to Mr. Griffin.
“I informed him that due to the seriousness of this issue, this is precisely the reason why the nomination and confirmation process is in place,” said Pryor.
Later, during that same Senate Judiciary Committee hearing, Democrat Senator from New York, Charles Schumer, pressed the then Deputy Attorney General Paul McNulty, about the issue of voter caging and Mr. Griffin.
“If there was such an involvement, if he did do that at some point in his job — in one of his previous jobs — do you think that could be– that should be a disqualifier for him being U.S. Attorney, in a state like Arkansas, where there are obvious civil rights suits,” asked Senator Schumer.
“I think any allegation or issue that’s raised against somebody has to be carefully examined, and it goes into the thinking as to whether or not that person is the best candidate for the job,” said McNulty.
About a month later, under immunity, Monica Goodling a Department of Justice staffer, who also worked with Griffin on the Bush campaign, testified before the House Judiciary Committee, saying that Mr. McNulty had not been forthcoming during his testimony.
“Failed to disclose that he had some knowledge of allegations that Tim Griffin had been involved in vote caging during his work on the President’s 2004 campaign,” said Goodling.
Mr. Griffin pointed out to KARK that in the course of the investigation, neither the House Committee, nor the Senate Committee, that did their own separate investigation ever contacted him.
KARK contacted Senator Patrick Leahy’s office to find out why Mr. Griffin was never contacted. We were told the focus of the investigation focused primarily on those who were involved in the decision to fire certain U.S. Attorneys, not the individuals who were appointed to fill those positions.
In reference to allegations of voter caging, according to legal documents KARK obtained, as far back as 1982, a federal court issued an injunction stopping the Republican National Committee from intimidating voters at the polls.
In 2004, an African American resident from Ohio filed a complaint, alleging that the RNC had violated the court’s injunction, by participating in a compilation of voter challenge lists. The federal court in 2004 then issued an order, in which it barred the RNC from using the list to carry out voter challenges, and directed the RNC to instruct its agents in Ohio not to use the lists for such purposes.