I want to let you in on something personal. Kind of rare for me.

Our documentary Vigilante will be available online through New Years Day.
Go to VigilanteMovie.com

After that, for contractual reasons, we have to take it down—it won’t be available online nor broadcast.  It’s free for these next couple of days – then gone.

So, take an hour to see the film that Black Voters Matter co-founder LaTosha Brown says, “Everybody, I mean everybody, must see.”

Watch it and pass on the link.

The press has been celebrating the “record voter turnout” in Georgia. But I know the terrible truth: Voter turnout plummeted by a million votes.

Why does it matter, and why do I care?

Having one more story, one more fact, buried by propaganda—hey, that’s just another Tuesday in American journalism.

That’s not why the darkness seizes me.

It’s because I was there when the elegant, elderly African-American woman in a walker was told, “Your registration has been cancelled” while her granddaughter broke down in tears. I was with the soldier who was refused his ballot at his military base. Fighting his emotions, he told me, “I couldn’t believe it. Not my country. Not now. Not this day and time.”

It’s when I think of the victims of these attacks, whose citizenship, whose humanity is denied; that sends me spinning into a frustrated rage.

Frankly, after 22 years of this, I just wanted to quit.

But, then, I get a text from Major Gamaliel Turner of Georgia, the soldier, thanking me for telling his story.

You don’t have to ask: The Major is Black, his challenger is white.

The Major did shed some angry tears—but then took action—hiring lawyers, traveling to Georgia with my crew to confront his accuser on camera. He’s a warrior, and his courage pushes me on even when I don’t see the point.

Because he sees the point.

Then George Rhynes sent a note. Rhynes is the Black journalist who reports from rural Georgia where the county lines are marked with Confederate flags; from the “sundown towns” where signs once read, “No Negroes After Sundown.” The signs are gone but the threat remains.

In this brutal atmosphere, Rhynes insists on reporting on the state’s terrorizing of Black polling officials, handcuffed in raids ordered by the “moderate” Gov. Brian Kemp, and of lynchings long forgotten.

Rhynes, Major Turner, and so many others you’ve met in my films and books, had been silenced. So they brought their stories to us. Because they know their stories remain unseen and never told by the reporters safely distant in Atlanta office towers, in five-star hotel suites, or in staged press conferences; reporters who will not venture to Coffee County or Forsythe or Valdosta.

I find myself going where CNN fears to tread, and now, I can’t walk away from what I’ve seen and heard and discovered.

And this: I found a note someone slipped into my pocket. I don’t know who wrote it. It reads,

“Thank you.
For giving a voice to
those without one.” 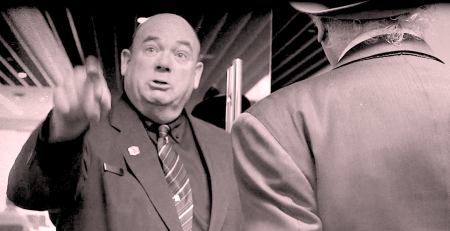 So, I’m kind of stuck. I’m obligated. I can’t turn my back on their stories.

I don’t want to give the impression that my work is all grim frustration. If you’ve seen me chase down some vote-thieving scoundrel of a Governor; or when I hold up cold evidence in the lying face of some vote rustler as Zach’s camera closes in; when they run away like cockroaches from a flashlight…you know I really enjoy my job.

This is certainly an odd year-end note.

But I want to tell you that all your kind comments, your donations, your passing my stories around — it just makes me humble and grateful.

And keeps me going.

And that’s not a bad way to end the year.

And so I thank you.