Just before his eighty-ninth birthday, my father was watching a Viagra commercial on TV. It ends with the warning, “If an erection persists for more than four hours, contact your doctor.”
He called up his clinic and got the nurse. He’d taken some Viagra, he said, more than four hours ago and his erection still wouldn’t go away.
“Mr. Palast, you shouldn’t have done that! You’ll have to get to the emergency room immediately.”
“I can’t go,” he said. “I haven’t shown all the neighbors yet.” 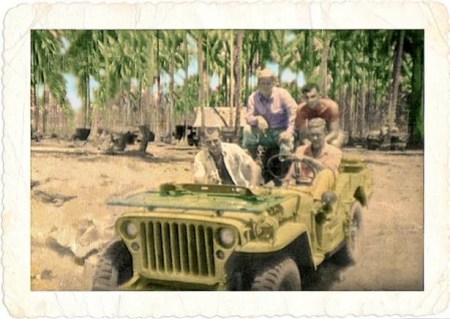 In 1930, when my father was an eight-year-old kid in Chicago, he asked his older brother why people were outside in the cold snow waiting in a long line. His brother Harold said, “It’s a bread line. They don’t have anything to eat. They’re hoping for bread.”
My father ran to his mother’s bedroom and grabbed my grandmother’s diamond brooch, ran downstairs, and gave it to a man in the bread line.
The important thing is that, after my father gave away the jewels, no one in his family chastised him. Later, as the Depression rolled on, my grandfather lost everything. So Gil Palast was a failure early. Stayed a failure. He made sure of it.
Here’s everything you need to know about my father: He hated furniture. But he sold furniture for thirty-five years. He sold it in Beverly Hills to trophy wives du jour.
When I turned eight, my father gave me some important jewelry: his medals from World War II. He wanted me to lose them, throw them away, any- thing. It was March 8, 1965. I remember the exact date because the day before, the U.S. Marines landed at Danang, Vietnam.
My father won the medals in the Pacific jungles for freeing the oppressed. Then, that day in 1965, that prick President Johnson had ordered my dad’s army to return to the jungle to oppress the free. Johnson and Nixon and the rest of the gangsters had turned my dad’s medals into garbage.
But life was not all garbage and Nixon and furniture. My parents danced-in fact, they were champs; they came in second in a tango contest when they were in their seventies.
And there was another kind of luck, if you were ready for it. I was thirteen. My dad was lying on the carpet in the living room of our dull tract house, killing a Saturday night hunting the radio for some Sinatra and stopped at the left side of the dial.
He called me over and said, “I want you to listen to this.” It was 1965 and Martin Luther King was speaking about the three kinds of love as defined by the Greek philosophers. King’s philosophy lesson was given in a church surrounded by angry white men who changed their white sheets for police uniforms and were prepared to burn down the church as they had done before.

Donate $200 and get a signed copy of my book Vultures’ Picnic, my dad’s favorite, right away (there are one 15 left), a Screen Credit in my new movie, and the signed DVD once the film has wrapped.
It’s a genuinely life-changing book – funny, pacy, intelligent and ultimately very moving. If you want to know how the world really works, read this. – A. L. Kennedy, Daily Telegraph

King was on a march, and beaten while marching, from Selma, Alabama, to Montgomery.
My father told me, “You’ll do that,” meaning I’d go down South, I’d join the Freedom Riders, become a lawyer for King, a knight for justice in an unjust world.
But why didn’t he go himself? Why didn’t he join the march, join the fight? I know: kids, responsibility, furniture. Furniture didn’t march. It sat there. It was sat upon. And the rich farted into the mattresses he sold them. The furniture store was locked from the inside by a poisonous fear of leaving life to chance.
So he put the burden of his quest on me. How screwed up is that? How staggeringly cruel.
On the fortieth anniversary of the Selma March, there was a big family-style dinner in Birmingham, Alabama, for the surviving giants of the Civil Rights movement. I couldn’t resist going down to report on it. I got a seat at the back.
At the end of his solemn speech, Martin Luther King III, son of the martyr, said, “I’d like to acknowledge the presence of a heroic young man among us. I took his book to my father’s grave and showed my father, and I know he was pleased. Greg Palast, please rise.” Then the giants around me stood up, and I accepted with grace a standing ovation from those more deserving than me.
I didn’t tell my dad.
I guess that’s why I’m telling it to you.
*************
Greg Palast and Rosario Dawson (and more)  will be appearing on My Peoples this Sunday evening at 9pm PDT. You can watch it Facebook at Facebook.com/mypeoplestv
This year, I returned to Selma, Alabama, not to commemorate Martin Luther King’s march, but to investigate massive vote theft-the rise of a new Jim Crow, once again blocking voters from Dixie to Detroit.
I invite you, I need you, to help me get out the film, now complete, before this election.
Make a tax-deductible contribution of $200 and I’ll send you my last copies of Vultures’ Picnic, from which the story above was taken-and give you a credit in the film, The Best Democracy Money Can Buy – or, give the credit to your dad for Fathers’ Day!
I’ve taken Vultures’ Picnic out of print, so it’s your last chance to find a copy of my own favorite.
***