[Lower Ninth Ward, New Orleans]  Nine years ago this week, New Orleans drowned.  Don’t you dare blame Mother Nature.  Miss Katrina killed no one in this town.  But it was a homicide, with nearly 2,000 dead victims.  If not Katrina, who done it?  Read on.

The Palast Investigative Fund is making our half-hour investigative report available as a free download – Big Easy to Big Empty: The Untold Story of the Drowning of New Orleans, produced for Democracy Now.  In the course of the filming, Palast was charged with violation of anti-terror laws on a complaint from Exxon Corporation. Charges were dropped, and our digging continued.

It wasn’t an Act of God.  It was an Act of Chevron.  An Act of Exxon. An Act of Big Oil.
Take a look at these numbers dug out of Louisiana state records:

These are the total acres of wetlands removed by just four oil companies over the past couple decades.  If you’re not a farmer, I’ll translate this into urban-speak:  that’s 14,688 square miles drowned into the Gulf of Mexico.
Here’s what happened.  New Orleans used be to a long, swampy way from the Gulf of Mexico.  Hurricanes and storm surges had to cross a protective mangrove forest nearly a hundred miles thick.
But then, a century ago, Standard Oil, Exxon’s prior alias, began dragging drilling rigs, channeling pipelines, barge paths and tanker routes through what was once soft delta prairie grass.  Most of those beautiful bayous you see on postcards are just scars, the cuts and wounds of drilling the prairie, once America’s cattle-raising center.  The bayous, filling with gators and shrimp, widened out and sank the coastline.  Each year, oil operations drag the Gulf four miles closer to New Orleans.
Just one channel dug for Exxon’s pleasure, the Mississippi River-Gulf Outlet (“MR-GO”) was dubbed the Hurricane Highway by experts-long before Katrina – that invited the storm right up to – and over-the city’s gates, the levees.
Without Big Oil’s tree and prairie holocaust, “Katrina would have been a storm of no note,” Professor Ivor van Heerden told me.  Van Heerden, once Deputy Director of the Hurricane Center at Louisiana State University, is one of the planet’s the leading experts on storm dynamics.
If they’d only left just 10% of the protective collar. They didn’t.
Van Heerden was giving me a tour of the battle zone in the oil war.  It was New Orleans’ Lower Ninth Ward, which once held the largest concentration of African-American owned homes in America.  Now it holds the largest contrition of African-American owned rubble. 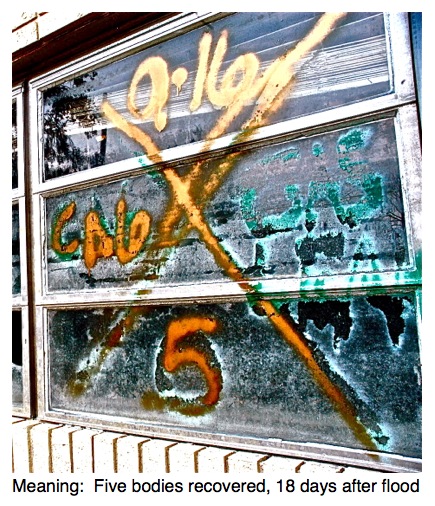 We stood in front of a house, now years after Katrina, with an “X” spray-painted on the outside and “1 DEAD DOG,” “1 CAT,” the number 2 and “9/6” partly covered by a foreclosure notice.
The professor translated:  “9/6” meant rescuers couldn’t get to the house for eight days, so the “2” the couple that lived there”, must have paddled around with their pets until the rising waters pushed them against the ceiling and they suffocated, their gas-bloated corpses floating for a week.
In July 2005, Van Heerden told Channel 4 television of Britain that, “In a month, this city could be underwater.” In one month, it was.  Van Heerden had sounded the alarm for at least two years, even speaking to George Bush’s White House about an emergency condition:  with the Gulf closing in, the levees were 18 inches short.  But the Army Corps of Engineers was busy with other rivers, the Tigris and Euphrates.
So, when those levees began to fail, the White House, hoping to avoid Federal responsibility, did not tell Louisiana’s Governor Kathleen Blanco that the levees were breaking up.  That Monday night, August 29, with the storm by-passing New Orleans, the Governor had stopped the city’s evacuation.  Van Heerden was with the governor at the State Emergency Center.  He said, “By midnight on Monday the White House knew. But none of us knew.”
So, the drownings began in earnest.
Van Heerden was supposed to keep that secret.  He didn’t.  He told me, on camera knowing the floodwater of official slime would break over him. He was told to stay silent, to bury the truth. But he told me more.  A lot more.

“I wasn’t going to listen to those sort of threats, to let them shut me down.”

Well, they did shut him down. After he went public about the unending life-and-death threat of continued oil drilling and channelling, LSU closed down its entire Hurricane Center (can you imagine?) and fired Professor van Heerden and fellow experts. This was just after the University received a $300,000 check from Chevron.  The check was passed by a front group called “America’s Wetlands” which lobbies for more drilling in the wetlands.
In place of Van Heerden and independent experts, LSU’s new “Wetlands Center” has professors picked by a board of petroleum industry hacks.
In 2003, Americans protested, “No Blood for Oil” in Iraq.  It’s about time we said, “No Blood for Oil” in Louisiana.
* * * * * *
For more revelations from Professor van Heerden, the true untold story of Katrina, get a signed copy of Palast’s bestseller, Vultures’ Picnic , a BBC Television Book of the Year.
Greg Palast is also the author of the New York Times bestsellers Billionaires & Ballot Bandits, The Best Democracy Money Can Buy and Armed Madhouse.
Get Palast’s latest film Vultures and Vote Rustlers.
HELP US FOLLOW THE MONEY. Visit the Palast Investigative Fund’s store or simply make a tax-deductible contribution to keep our work alive!
Subscribe to Palast’s Newsletter and podcasts.
Follow Palast on Facebook and Twitter.
www.GregPalast.com