Ted Rall is a lying, fantasist scumbag.
Or maybe, just maybe, the LA Times, complicit with the Los Angeles police, have slandered and slimed America’s toughest critic of police violence. 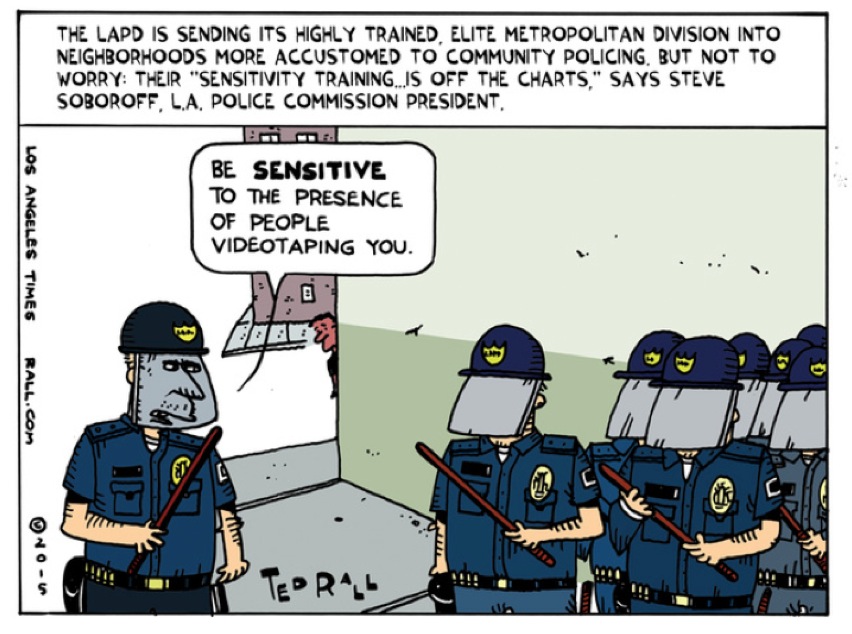 The story:  On July 27, the LA Times fired their long-time columnist and cartoonist Ted Rall for fabricating a story of police misconduct.  The LA Times’ evidence?  A tape recording provided by the LAPD.  Problem was, the tape was muffled – possibly tampered with.
When audio experts cleaned the garbage interference on the tape-uh, oh!- the LAPD and LA Times accusations fell to pieces.
The details:  On May 11, Ted Rall wrote his umpteenth column in the LA Times, LAPD’s Crosswalk Crackdown: Don’t Police Have Something Better to do? about gang violence:  the gang is the LAPD.  This was Rall’s lightest jab of all, a satirical remembrance of when, 14 years earlier, a cop put him in handcuffs for a simple jaywalking ticket.
Unbeknownst to Rall, the jaywalker-stalker cop had recorded this big bust.  The LAPD dropped the tape on the Times.

Ted Rall’s new book-length comic, Snowden
will be released on August 25.
Pre-order it from Amazon, B&N & others and get him on the bestseller list – or make a tax-deductible donation and get a copy signed by Ted.
100% of the proceeds will go to Rall’s defense. Or lend you support by making a No Gift Donation.
(Rall is a Fellow of The Palast Investigative Fund)

The police source said the recording and other info proved Rall was lying. That the tape proved that Rall had never been handcuffed – nor, as Rall wrote in his column, was there a group of onlookers complaining about the cop’s over-kill. 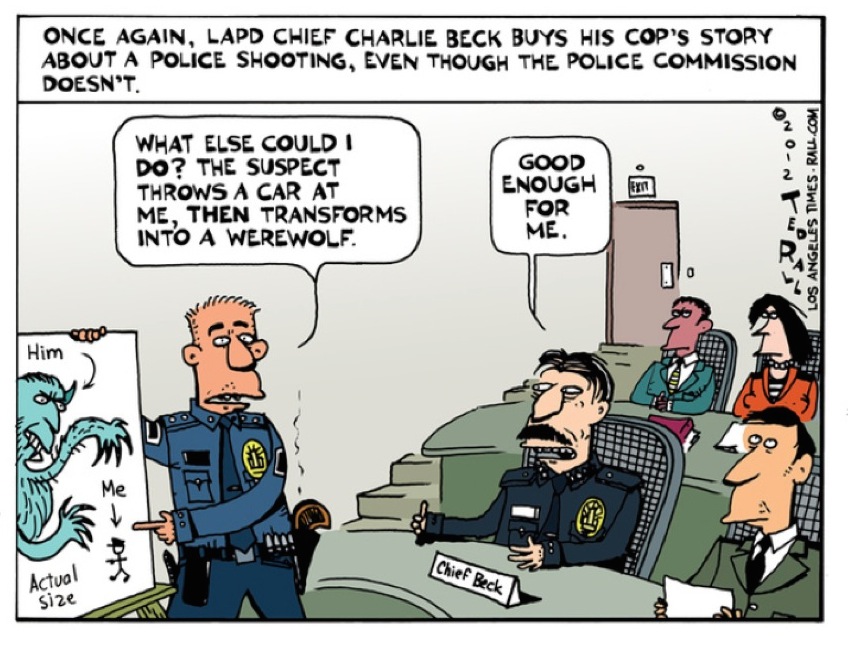 In other words, they’ said and the Times accepted, Rall just made up the whole handcuff-and-crowd thing to smear the LAPD.  On that basis, LA Times editor Nick Goldberg printed and signed a big-splash editorial saying, in effect, Rall had committed the unpardonable sin of fabricating a story – and Rall was fired.
This, of course, would end Rall’s career as a syndicated newspaper columnist and cartoonist.
And I was going to have to fire Rall too.  Rall is a journalism fellow of the Palast Investigative Fund, the not-for-profit foundation that backs our work.  If the charges were true, I wouldn’t hesitate to fire Rall’s lying ass””but only after I break his pen and cut off his fingers.
I demanded a copy of the recording for our audio experts to review – and asked Rall to do the same.
Oh, mama!  To my surprise – and Rall’s glee – the crowd that he had allegedly fantasized about suddenly came alive – with three women shouting, “Why’d you handcuff him?” and “Take off his handcuffs!” – the handcuffs that were supposedly fabricated by Rall.  (One woman helpfully suggested to the officer, “Don’t forget to ride his —hole!”)
Listen to it yourself, or read the true transcript.  Check this against the LAPD’s incomplete transcript. 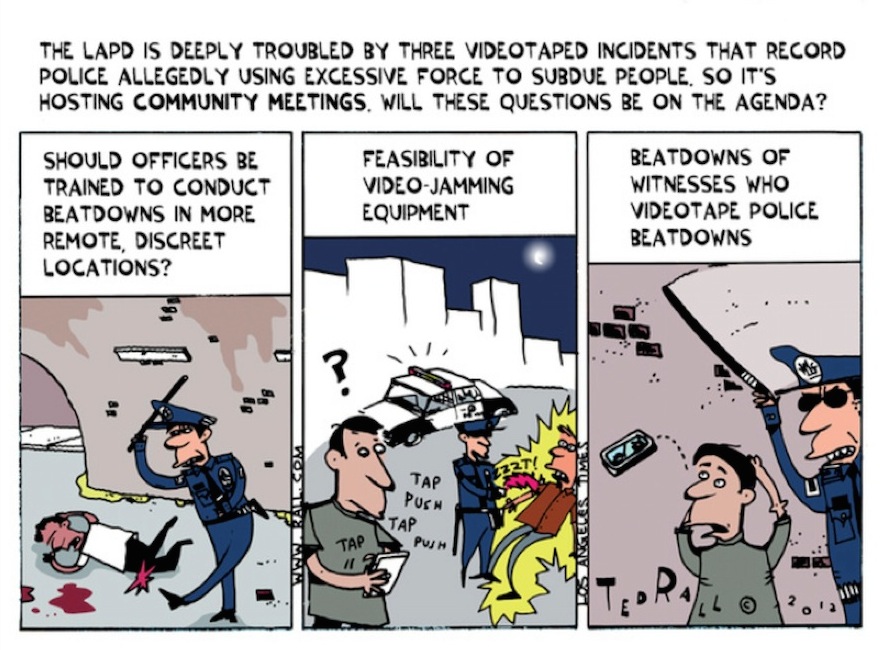 As an investigative reporter, I was astonished that the LA Times did not even bother to do an independent analysis of the tape.  Rall told me that a Times reporter, Paul Pringle, told him the Times simply accepted the recording transcript as truthful because it came from the LAPD.
And the LAPD hates hates hates Rall.
I can’t blame them, given Rall’s reports and caustic drawings, the truth hurts. The LA police union wrote that it “applauds [the] LA Times firing of cartoonist Rall,” whose drawings drew blood from the police force infamous for its gang-style beating of the handcuffed Rodney King.
Rall said that reporter Pringle told him that, to bolster their case against Rall, the LAPD source said that the arresting cop, Will Durr, never used handcuffs in petty violation stops.  However, by coincidence, a news report about that very same cop, Durr, handcuffing a driver on a routine traffic stop appeared in The LA Times.
Oops!
My calls to the Times’ “investigative reporter” Pringle went unanswered.  LA Times opinion editor Nicolas Goldberg, whom I know and have long respected, said he was not authorized not go on record to defend his paper.  The smell of panic in the Times’ executive suite is getting stronger.
So I called the LAPD.  Did they drop the garbled tape and false transcript on their critic?  Oddly, spokesman Officer Mike Lopez, who knew the story well, could not confirm the LAPD was the source.  Then, was it stolen from official police files?
Would the LAPD conduct an internal affairs investigation of the theft or mis-use of confidential police files?
Ironically, the LA Times is the biggest metropolitan daily in the USA with the guts to print Rall and even pick up a Palast story or two. Clearly, the heat from The Heat is on. I really do hope that, in light of this new information, the paper will do the right thing and retract their statement.
Whatever the original justification for the Times’ printed attack, to let it stand uncorrected now, in light of the new uncontroverted evidence, would violate core standards of journalistic ethics.
As for the Palast Fund, with the evidence now in hand, we will fight this attack on our journalist.
And, if the Times won’t carry Rall’s reports, GregPalast.com will.  Sign up here and get his reports and toons free of charge.

The issue:  Killing, not Jaywalking
Why am I supporting Rall?  Because this is not about jaywalking. This is about killing.  Police killings.  And the ability of journalists to report just the facts, ma’am, free of fear of retribution by the police or media executives.
Rall’s career was gunned down by a phony transcript of a recording of a bust. 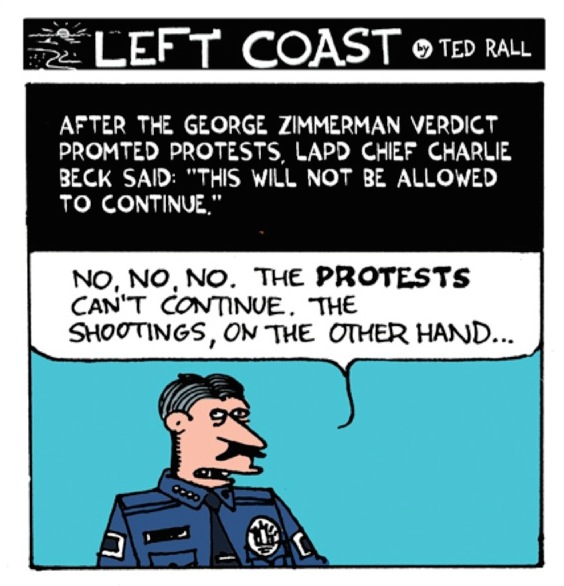 This follows close on the shooting death of an unarmed 29-year-old homeless veteran by an LAPD officer on the Venice Beach boardwalk.  Brendon Glenn was known as a sometimes surly, but ultimately harmless, alcoholic.  Near midnight on May 6, after he appeared to accost a local resident, two cops wrestled Glenn to the ground.
The original statement by the LA chief of police, Charlie Beck, stated that, “an altercation occurred between the two officers and the suspect. During that physical altercation, an officer-involved shooting occurred.”  But security camera tape would later reveal that just wasn’t true.
In fact, film from a local store camera revealed that, for reasons unknown, one cop stepped away from his partner who had Glenn on the ground, then turned and fired two mortal shots into the homeless man.
An associate of the Palast investigations team, investigative reporter and former CBS news anchor Bree Walker, has been reviewing the case.
What Walker and every other newsperson has to worry about now is, will reporting the full story of police violence result in a slander and smear campaign against the investigating reporter?
The police believe they have silenced Rall, that his public pillorying by the Times “serves as an example” – a warning to troublesome journalists.  Rall, to their dismay, is proving more of an example of undeterred courage.
We can only hope that, given the new evidence, the Times restores not just Rall’s reputation, but its own.
* * * * * * * *
Greg Palast is the author of the New York Times bestsellers, Billionaires & Ballot Bandits, The Best Democracy Money Can Buy and Armed Madhouse.
Make a tax-deductible donation and keep our work alive.
Subscribe to Palast’s Newsletter and podcasts.
Follow Palast on Facebook and Twitter.
www.GregPalast.com