The importance of the January 5 Senate runoff elections in Georgia cannot be overestimated. They will determine which party controls the Senate, with vast ramifications for economic policy, climate change, workers’ rights, immigrants’ rights, judicial nominees, and much more. The purging of nearly 200,000 registered voters from the voting rolls in Georgia could spell the difference between a Republican or a Democratic majority in the Senate.

In October 2019, Georgia Secretary of State Brad Raffensperger purged 313,243 people from the voter rolls, claiming they had moved from their registration residence, which is a ground for removal under the National Voter Registration Act (NVRA). But five top expert firms hired by the Palast Investigative Fund (PIF) determined that 198,351 of those Georgia voters had not moved at all and were therefore illegally purged from the rolls.

Georgia claimed that thousands of voters submitted postal change-of-address forms, but the U.S. Postal Service said they did not. In addition, Georgia allegedly violated the NVRA by employing an unlicensed contractor who used an incorrect list. 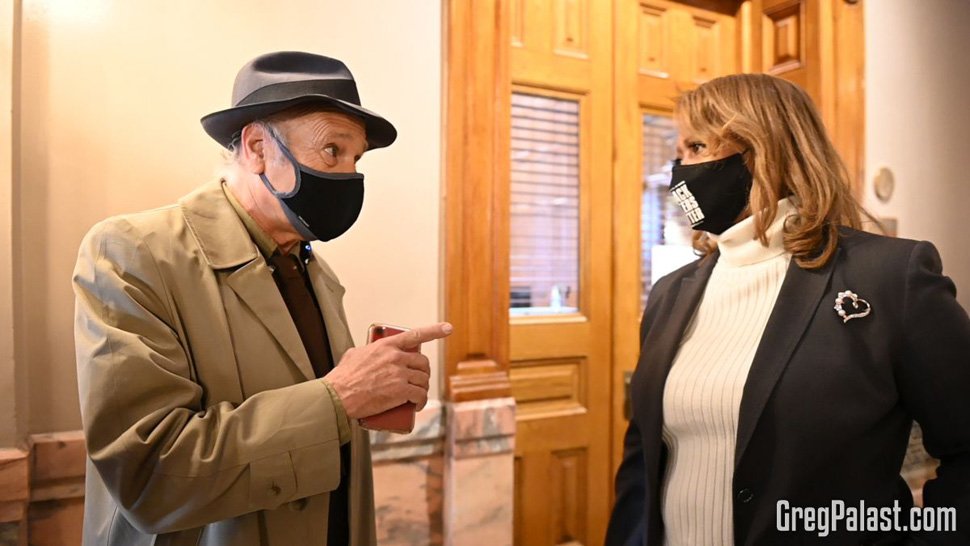 The PIF experts performed a name-by-name analysis of the addresses, using Advanced Address List Hygiene. John Lenser, an address hygiene consultant and CEO of American Fifth Act, testified that this is the industry standard for residential address verification. The experts called on more than 240 data sources. They found a 63.3 percent error rate. That doesn’t even include tens of thousands of other voters purged for moving within their neighborhoods or apartment buildings, which constitutes a violation of the NVRA.

“Georgia’s officials have been exposed using a horrendously inaccurate list of voters whom they claim had filled out postal change-of-address forms,” investigative reporter Greg Palast told Truthout. “The Postal Service itself says they did not fill them out. They did not move. Yet, the political hacks that run Georgia’s elections have chosen this rotten trick to stop tens of thousands of citizens from voting.” The cancellations primarily impact young voters, lower income voters and people of color.

In a prior case, Georgia’s secretary of state admitted that voters could be restored to the rolls within 24 to 48 hours if necessary. Why, then, does Raffensperger refuse to reinstate those voters? “It is a cold, racially poisonous game, brazenly backed by the Republican National Committee lawyers desperate to bend the upcoming Senate runoff,” Palast said. 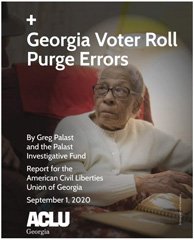 The voter registrations were cancelled because, the secretary of state alleged, (1) they had filed a change of address form with the National Change of Address (NCOA) registry; (2) election officials had received returned mail; and (3) Georgia law in effect at the time of the cancellations allowed removal if, after three years of no contact, the voter did not return a confirmation postcard and then did not vote in the next two general elections; this is known as “use it or lose it.”

Four civil rights organizations, including Black Voters Matter and Rainbow PUSH Coalition, filed a lawsuit in U.S. District Court for the Northern District of Georgia (Atlanta) on December 2. The suit was based on the expert reporting of PIF and the official report of the ACLU of Georgia that was published on September 1. Those experts determined that 199,908 voters can still receive mail at their address of registration so it is not likely they have moved.

Plaintiffs are asking that the nearly 200,000 names allegedly wrongfully removed from the voter rolls be restored in time for the critical runoff election on January 5. In the alternative, they seek the appointment of a “special master” — an expert who would review the work of the PIF experts and the secretary of state’s list maintenance experts to decide which voters were wrongfully removed from the rolls and reinstate them.

The NVRA, which Congress enacted in 1993, declares that voting is a fundamental right. It requires that federal, state and local governments promote the exercise of the right to vote. And it says:

Georgia’s “use it or lose it” rule violates the Equal Protection Clause of the 14th Amendment, the lawsuit claims, because it creates incorrect distinctions, thereby disenfranchising infrequent voters.

On December 16, the district court judge denied the plaintiffs’ request for an injunction for noncompliance with the NVRA’s 90-day notice requirement. But the judge said there were discrepancies and told the parties to sit down and try to settle the case.

On December 28, the plaintiffs filed a motion for reconsideration and a request to add the Palast Investigative Fund as a plaintiff in the case. A letter the plaintiffs’ attorney sent to Raffensperger on September 22 on behalf of PIF would then satisfy the 90-day notice period, which expired on December 23.

The plaintiffs are also asking the judge to order the secretary of state to count the provisional ballots of voters who try to vote but whose registrations were cancelled for moving when they didn’t move, as documented by the plaintiffs’ experts.

Although the secretary of state is willing to put people back on the voter rolls, there is no indication that will be accomplished before the January 5 runoff elections. The conservative Raffensperger is feeling the heat, having come under fire from Donald Trump, who called him “the enemy of the people” for refusing to join Trump’s conspiracy to steal the presidential election from Joe Biden. They recounted the votes three times in Georgia and got the same result each time. 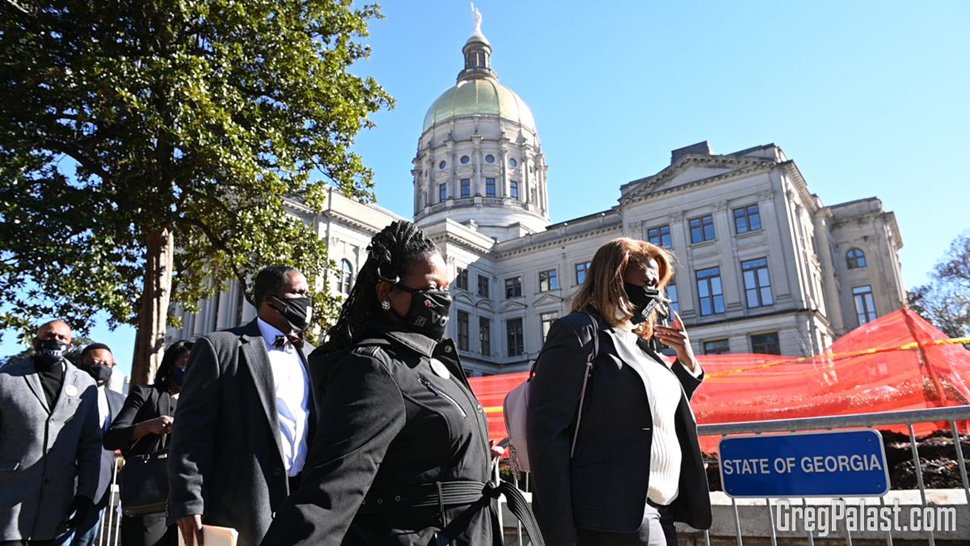 The plaintiffs in the lawsuit have assembled a legal team of committed attorneys, including C.K. Hoffler, president of the National Bar Association; Gerald Griggs, known as the “Justice Fighter”; iconic civil rights attorney Fred Gray; and Jeanne Mirer from New York.

“This case is the first of its kind to provide evidence that nearly two-thirds of the people that the state removed from the voter rolls for having moved, have not done so,” Mirer told Truthout. “Despite losing the injunction, we will continue to fight to get these voters back on the rolls and to have their votes count in the Senatorial runoff.”

LaTosha Brown, co-founder of Black Voters Matter Fund, said the removal of voters from the Georgia rolls is not an issue of voter fraud, but one of “[m]assive scale voter suppression.”

Mirer said, “In addition to the efforts at voter suppression, which purging voter rolls represents, we need to think about the lesson from this last election. If the barriers to voting are eliminated, if the states make the franchise accessible, then people will vote.” She noted, “That lesson is not lost on the Republicans, who believe they can only win if the vote is suppressed.”

“The easing of restrictions and expansion of access to voting during COVID will be targeted by Republicans starting at the beginning of the year,” Mirer predicts. “All voting rights groups need to get together and come up with a proactive strategy to protect and expand access to voting.” She cited the NAACP, the NAACP Legal Defense Fund, the League of Women Voters, Common Cause, the Brennan Center for Justice, the National Lawyers Guild, Latinx and Asian American groups, and labor unions as some of the organizations “laboring for years to protect the right to vote against all attacks.”

The voting rights groups have not joined together to develop “a proactive strategy to expand voting rights given the amount of defense they have had to play,” Mirer said. She thinks it is more important than ever for progressive groups to work in coalition to combat the Republican efforts in 2021 and 2022 “to shut the doors to easing access to voting that COVID-19 opened.” Expect “an onslaught of moves to constrict access to the ballot.”

Meanwhile, Mirer’s legal team will continue the struggle to reinstate the purged Georgia voters to the rolls in time for the Senate runoff elections. Biden beat Trump in Georgia by 12,000 votes. The purged voters could decide who wins on January 5. 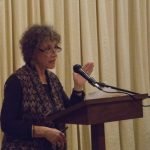 Marjorie Cohn is professor emerita at Thomas Jefferson School of Law, former president of the National Lawyers Guild, deputy secretary general of the International Association of Democratic Lawyers and a member of the advisory board of Veterans for Peace. Her most recent book is Drones and Targeted Killing: Legal, Moral, and Geopolitical Issues.