I am thrilled that the NAACP and the League of Women Voters are using our Crosscheck investigation evidence to stop Jim Crow in Indiana. Only 27 states left to go. Next target: Virginia, where a so-called Democrat, Terry McAuliffe needs to dump Trump’s Crosscheck purges.
The lawsuit, which was filed on Wednesday, August 23, challenges Indiana Senate Bill 442 which changed the way the state implemented Crosscheck. Previously, when an Indiana voter was flagged by Crosscheck, the state sent an address confirmation mailer by way of notification. (Though better than nothing, these notifications look like junk mail and are easy to ignore.) However, SB442, which went into effect on July 1, allows the state to immediately remove voters from the roll, removing the notification step.
Read the full complaint – which states “Crosscheck is unreliable and discriminatory in practice” – here:

[pdf-embedder url=”http://gregpalast.com/wp-content/uploads/IndianaVoting.pdf”]
Kris Kobach’s racially-biased-by-design Crosscheck voter purging op is mentioned by name 35 times in the complaint. Below are some highlights:
“Crosscheck is unreliable and discriminatory in practice.”

Crosscheck is utilized “in a manner that is not uniform, reasonable, and nondiscriminatory.” 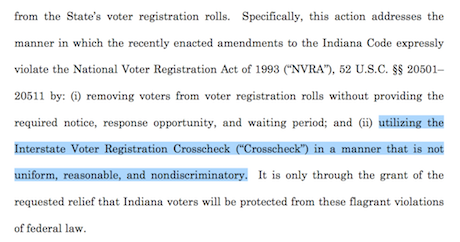 SB 442 / Crosscheck “exposes voters to removal based on a list maintenance procedure that is neither reasonable, uniform, nor nondiscriminatory.”

SB 442 / Crosscheck requires “no inquiry, confirmation, or notice to a voter that his or her registration is being canceled”

“In practice, Crosscheck produces inaccurate results, false positives, and leads to the discriminatory disenfranchisement of many legally registered voters.” 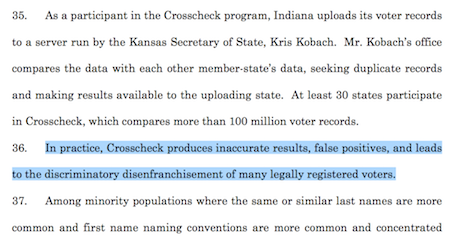 “Crosscheck flagged one in six Latinos, one in seven Asian-Americans, and one in nine African- Americans as potential double registrants.”

Crosscheck would eliminate “200 unique, legitimate voters for every one individual it identified that was registered in two jurisdictions.” 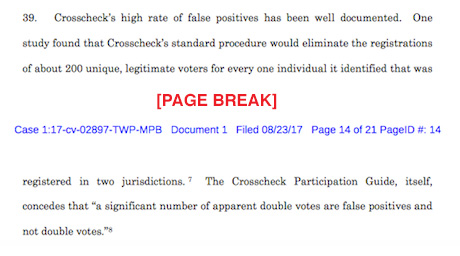 Note: Even the 1 in 200 are only REGISTERED in two jurisdictions ”” and are NOT accused of actual double voting.
“The Crosscheck Participation Guide, itself, concedes that ‘a significant number of apparent double votes are false positives and not double votes.'”

Use of Crosscheck “risks severe, discriminatory disenfranchisement of registered voters in violation of federal law.” 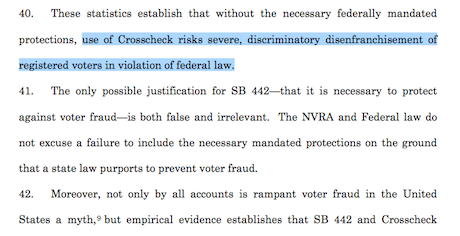 “Moreover, not only by all accounts is rampant voter fraud in the United States a myth, but empirical evidence establishes that SB 442 and Crosscheck would not even identify such fraud if it did exist.” 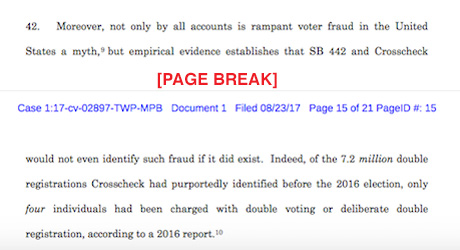 Crosscheck identified individuals as having moved from Virginia to another state, when in fact the opposite was true””indicating that Crosscheck’s data is inherently flawed and includes the names of individuals who are not ineligible.

“SB442’s Reliance on Crosscheck violates the NVRA’s Prohibition Against Arbitrary, Unreasonable, and Discriminatory Removals of Voters from Registration Rolls” 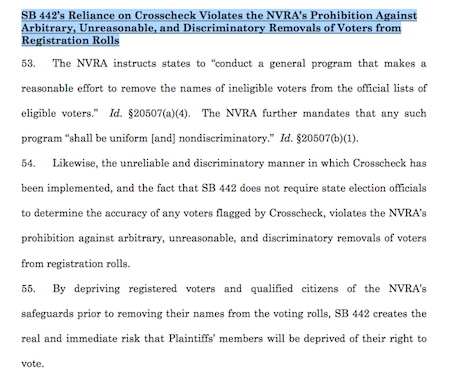 Here’s the link to my August, 2016 Rolling Stone article, “The GOP’s Stealth War Against Voters“, cited in the complaint.

For more on Crosscheck and how it helped Trump steal the White House in 2016 watch The Best Democracy Money Can Buy – available to view worldwide from just $2.99!
Or support our work and get a signed copy of the DVD and/or companion book from our store.
***
Before turning to journalism as an investigative reporter for The Guardian and BBC Television, Greg Palast was an investigator of fraud and racketeering for governments and labor unions worldwide. His investigations have appeared in Rolling Stone, Harper’s and New Statesman.
Known as the reporter who exposed how Katherine Harris and Jeb Bush purged thousands of Black voters from Florida rolls to steal the 2000 election for George Bush. Palast has written four New York Times bestsellers, including Armed Madhouse, Billionaires & Ballot Bandits, and The Best Democracy Money Can Buy, now a non-fiction movie.
Stay informed, download the new, #TrumpStoleIt, post-election edition of our hit film, The Best Democracy Money Can Buy, or get the signed DVD, a signed copy of the companion book – or better still, get the Book & DVD combo.
Visit the Palast Investigative Fund store or simply make a tax-deductible contribution to keep our work alive! Alternatively, become a monthly contributor and automatically receive Palast’s new films and books when they’re released!
Or support the The Palast Investigative Fund (a project of The Sustainable Markets Foundation) by shopping with Amazon Smile. AmazonSmile will donate 0.5% of your purchases to the Palast Fund and you get a tax-deduction! More info.
Subscribe to Palast’s Newsletter. Follow Palast on Facebook and Twitter.
GregPalast.com