The fact that the party of the late Hugo Chavez lost two-thirds of the seats in Venezuela’s congress puts a lie to the canard that the Bolivarian Republic of Venezuela as created by Chavez is some kind of dictatorship, a nasty bit of propaganda long pushed by the US mainstream press.
For BBC, I covered Venezuela elections. There, they count the votes – unlike in the Third World dictatorships of Florida and Ohio.
I know the leader of the opposition, Julio Borges, just as I knew Chavez and the current President Nicolas Maduro.
Borges is no right-wing fascist. It’s important to note that the opposition did not run against Chavez or his legacies and policies. Rather they ran against a sclerotic government, too long in office, petty corruption – and the crushing reality of oil income cut by more than half. 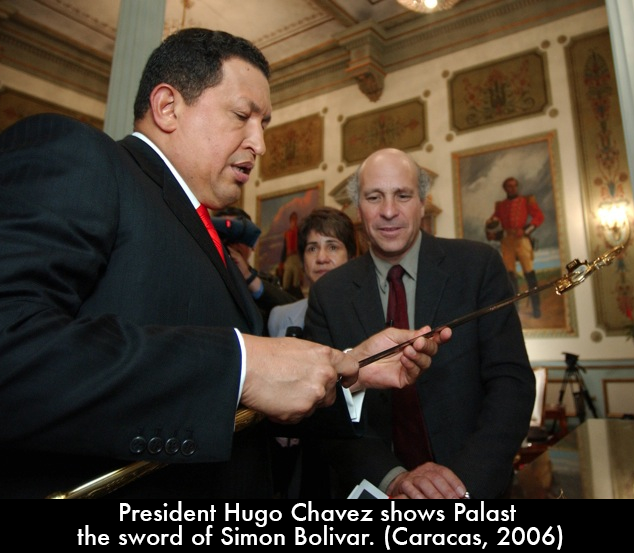 Chavez’ revolution is permanent. The redistribution of wealth and power to the Black and Indian population from the white “Spaniards” is irreversible.
Chavez is gone but Chavismo lives despite the crying and moaning of the world financial elite.
Ironically, Chavez’ socialist party is the victim of the success of its policies: young people, who did not know the crushing poverty and hopelessness that reigned before Chavez, are now college grads, clamoring to maintain the middle-class lives they’ve come to expect.
Chavez would be pleased with the triumph of the real democracy he created.
In honor of this affirmation of democracy, our foundation will offer a free download of “The Assassination of Hugo Chavez.”
And next year, may democracy return to the USA.

* * * * * * * *
Greg Palast is the author of the New York Times bestsellers, Billionaires & Ballot Bandits, The Best Democracy Money Can Buy, Armed Madhouse and the highly acclaimed Vultures; Picnic..
Make a tax-deductible donation and keep our work alive.
Subscribe to Palast’s Newsletter and podcasts.
Follow Palast on Facebook and Twitter.
www.GregPalast.com