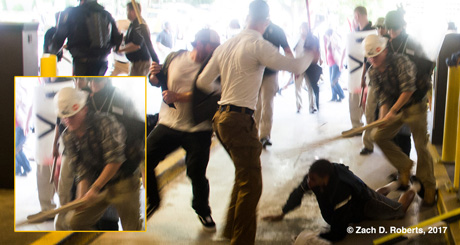 Above: Dan Borden attacking De’Andre Harris in a Charottesville parking garage.
Neo-Nazi Dan Borden, who nearly beat Black school teacher De’Andre Harris to death in Charlottesville on August 12, has been arrested after being identified via photos taken by courageous Palast Investigative Fund photographer Zach D. Roberts. Borden also assaulted Roberts, who kept taking photos of the skinhead attackers even after the attackers’ pal pulled a gun.
Journalism saves lives-when it doesn’t lie.
Borden, 18, a former Mason High School student from Ohio, was charged with malicious wounding by Charlottesville police on Thursday, August 24 for the brutal assault of Harris. He was arrested the following day and is being held at the Hamilton County Justice Center in Cincinnati, OH awaiting extradition. 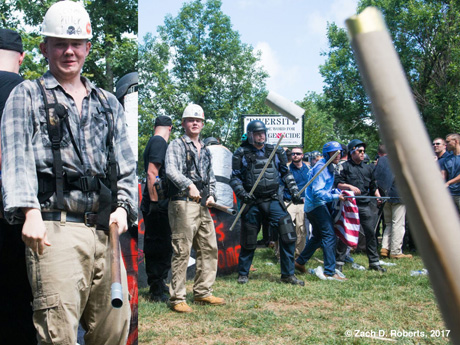 Above: Borden, pictured earlier in the day, when he threw a metal-tipped baton at Roberts.
You can see more of Zach D. Roberts’s images from Charlottesville here. Zach also got an exclusive interview with Harris, which you can find here.

Before turning to journalism as an investigative reporter for The Guardian and BBC Television, Greg Palast was an investigator of fraud and racketeering for governments and labor unions worldwide. His investigations have appeared in Rolling Stone, Harper’s and New Statesman. Known as the reporter who exposed how Katherine Harris and Jeb Bush purged thousands of Black voters from Florida rolls to steal the 2000 election for George Bush. Palast has written four New York Times bestsellers, including Armed Madhouse, Billionaires & Ballot Bandits, and The Best Democracy Money Can Buy, now a non-fiction movie.
Stay informed, download the new, #TrumpStoleIt, post-election edition of our hit film, The Best Democracy Money Can Buy, or get the signed DVD, a signed copy of the companion book – or better still, get the Book & DVD combo.
Visit the Palast Investigative Fund store or simply make a tax-deductible contribution to keep our work alive! Alternatively, become a monthly contributor and automatically receive Palast’s new films and books when they’re released!
Or support the The Palast Investigative Fund (a project of The Sustainable Markets Foundation) by shopping with Amazon Smile. AmazonSmile will donate 0.5% of your purchases to the Palast Fund and you get a tax-deduction! More info.
Subscribe to Palast’s Newsletter. Follow Palast on Facebook and Twitter.
GregPalast.com