By Robert C. Koehler, Tribune Media Services
“Governments don’t keep secrets to protect the public, but to deceive the public.”
Greg Palast happens to be talking about a certain Big Oil-friendly blueprint for the future of the Iraqi oil industry when he makes this point, almost in passing, in his just-released book, Armed Madhouse (Dutton), but he could be stating the general premise of the whole book, or of his career as a journo-sleuth in the Jack Anderson mold and stand-in for the little guy in the global economy. His raison d’Ãªtre is to ferret out those secrets and those deceptions and present them in all their cynical glory to the people for whom such knowledge is vital: you and me.

"Something is wrong in America"

As Ohio Secretary of State Kenneth Blackwell certified President Bush’s reelection on Monday, we hear an address by investigative reporter Greg Palast about the disenfranchisement of black votes in the Nov. 2nd election.

Abused and Conned in Florida

For the Guardian and Observer (UK)
Sunday October 31, 2004
Voters claim abuse of electoral rolls.
Students say they were conned into registering twice.
An Observer investigation in the United States has uncovered widespread allegations of electoral abuse, many of them going uninvestigated despite complaints of what would appear to be criminal attempts to manipulate voter lists.

Read More…Abused and Conned in Florida

by Ed Rampell
Not everyone gets to be Woodward and Bernstein, cracking the big story and coming out a hero. BBC investigative reporter Greg Palast is getting the Southern California branch of the American Civil Liberties Union’s 2004 Upton Sinclair Freedom of Expression Award this weekend – but he was also recently sued for $15 million by former New York Governor Mario Cuomo, a Democrat.

Guerrilla of the Week

by Jenn Bleyer
Greg Palast is back with an updated, expanded edition of the bestseller that won’t die, The Best Democracy Money Can Buy.

Read More…Guerrilla of the Week

IRAQ FOR SALE – exclusive report by Greg Palast for BBC Newsnight First Broadcast 19 March 2004 WATCH THE REPORT  BROADCAST TRANSCRIPT: “THE ARRIVAL” GENERAL JAY GARNER, Former chief of Iraq occupation authority, arriving by plane. I’ve got about 220 people on this aeroplane with me,…

In addition to being the author of the excellent best-seller The Best Democracy Money Can Buy, award winning investigative journalist Greg Palast also hosts the BBC-produced exposes of the Bush family, Bush Family Fortunes, which has aired in countries all over the world except, coincidentally, in America, where the Bush family happens to rule. In the documentary, Palast uncovered many of the details that proved the theft of the 2000 Presidential election and exposed disturbing connections between the Bushes and the Bin Ladens. Currently, Palast is working with Martin Luther King III to bring attention to the fact that our democracy is being hijacked via computerized voting machines.
HUSTLER: Is the fix in on the 2004 election?
PALAST: You may have already voted in 2004; 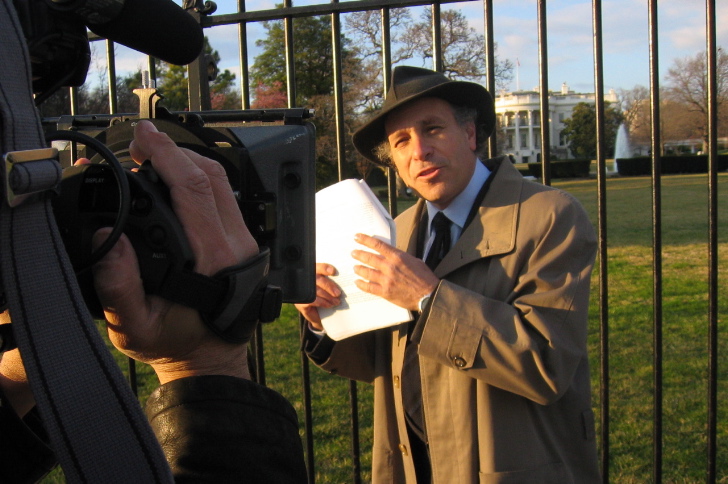 Is truth a victim?

BBC Newsnight Interviews Dan Rather who gives us a revealing insight about the post September 11 climate in the US media rooms.

It's a Brutal World, But There is Hope

GREG PALAST is a breath of fresh air in the world of journalism. He began as an investigator, working on behalf of trade unions and consumer groups in the US, highlighting the abuse of corporate power and the destruction of people’s lives and planet. His work led to the prosecution of nuclear power plant builders for racketeering, and the revelation of how the Exxon Valdez crash was allowed to happen because the shipping company cut costs by turning the radars off!

Read More…It's a Brutal World, But There is Hope

Discussing Jeb Bush, Exxon Valdez and Bush-bin Laden
We are honored to post our second interview with Greg Palast, an investigative reporter for the BBC and the Observer (sister paper of the Guardian).

Transcribed by Necco27
[Bob] Thank you all for joining us for our chat with Greg Palast! Greg has just published an outstanding book, “The Best Democracy Money Can Buy” You can buy it on Amazon.
[GP] Have you read it, Bob, or are you just pulling my…
[Bob] As an Enron executive, I take the 5th!
[GP] It’s a hit in Dublin!
[David] Europeans have an endless appetite for American foibles.

Join me, @RickSmithShow & the @AM950Radio crew for a special, one-night only impact screening of Vigilante: Georgia's Vote Suppression Hitman — narrated by @RosarioDawson — at @CroonersMN in #Minneapolis on Weds, Oct 12.

Entry is FREE with RSVP: http://bit.ly/vigilante950