Skip to content
[Above:Robert F. Kennedy, Jr. explains “caging”.]
The RNC is petitioning a federal district court in New Jersey to lift a Consent Decree that blocked an ugly Jim Crow voter purge scam known as “caging.” Here’s an excerpt from a memo filed on November 5th, 2016 by the presiding US District Judge, John Michael Vazquez, which provides some background on the case:

The original Consent Decree was entered in 1982. The Decree was the result of the settlement of a lawsuit which claimed that, in connection with the 1981 New Jersey Gubernatorial election, the RNC and the New Jersey Republican State Committee attempted to intimidate the minority voters, in violation of the Voting Rights Act. Specifically, the RNC sent sample ballots to areas where a large portion of the voters were ethnic minorities, then asked that the name of each voter whose ballot was returned as undeliverable be removed from New Jersey’s voter rolls.

The Decree was modified and extended twice, in 1987 and 2009, but it’s set to expire on December 17, 2017 – unless, as per Vazquez’s memo, “the DNC proved in the interim that the RNC violated the Decree, in which case the Decree would be extended an additional eight years.”

I discovered that the RNC was violating this Consent Decree in 2004, when my BBC Newsnight team caught George W. Bush’s campaign red-handed. And, get this, Roy Moore’s campaign chief, Brett Doster, was the one doing the dirty work for George W. in Florida. The RNC was busted when a little bird gave me an email from Tim Griffin (Karl Rove’s dogsbody) to Doster (Moore’s goon) with a subject header marked “caging” – with one of the caging lists attached.

The full skinny on my investigation into the RNC’s racist caging operation is chronicled in Chapter 13 of my book, The Best Democracy Money Can Buy. We’ve posted the complete chapter, entitled “Karl Rove Confidential”, below.

Robert F. Kennedy, Jr. explains caging in The Case of the Stolen Election – the post-election update of our film, The Best Democracy Money Can Buy (see clip), which is based on the book. Kennedy also discussed the original RNC Consent Decree with me and asserts that even if it is allowed to expire, caging remains illegal under the Voting Rights Act because it targets voters of color. However, it’s unlikely that GOP officials will choose to interpret the law in the same way, and the Consent Decree’s expiry could lead to a vastly increased, and more overt, use of these nefarious vote-stealing tactics as we head towards the 2018 and 2020 elections.

CAGING: Mailing to registered voters – soldiers, students, the homeless, and others – and using “returned” letters to challenge their registrations and absentee ballots. SEAL Team Six members, it’s a week before the election: Do you know where your ballot is? 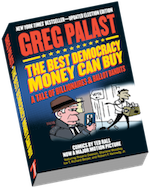 That kind of money doesn’t come into a GOP candidate’s hands without the helpful hand of Karl Rove.

When voting-rights attorney Robert F. Kennedy Jr. joined our investigations team in 2008, he examined the latest documents we’d squirreled out of Republican Party headquarters’ files. And then he said, speaking of Karl Rove and his associate Tim Griffin, “What they did was absolutely illegal – and they knew it and they did it anyway. Griffin should be in jail.”

But Griffin’s not in jail, he went to Congress. Rove is not in prison either. According to IRS records, he’s director of a non-profit “social welfare” organization. American Crossroads, GPS, tax-exempt under section 501(c)(4) of the tax code, aims to improve society’s welfare by dragging Democrats out of their seats in Congress and removing a Democrat president from the White House. A federal prosecutor expressed the same sentiment to me. How Griffin ended up in Congress, not in prison, is the more intriguing story.

It was well after midnight, some time in the first week of October before the 2004 election, when the e-mails started pouring in.

The chieftains of the George W. Bush reelection campaign were copying me on their most intimate and confidential messages and Ollie, my research director, pissed me off by waking me in my cheap motel room to tell me this whacky-ass news. I was in the middle of nowhere USA with my election investigation for BBC going nowhere, so I wasn’t in the mood for this bullshit.

But it wasn’t bullshit. It was a miracle. Karl Rove’s right-hand man, Tim Griffin, Bush’s research director (read, smear director), had sent the data for some sick scheme to the chairman of the Bush reelection campaign in Florida, Brett Doster. Griffin, instead of sending copies to GeorgeWBush.com, their internal e-mail domain, sent copies to GeorgeWBush.ORG, to my friend John Wooden’s joke site. Wooden passed them on to us for forensic analysis. 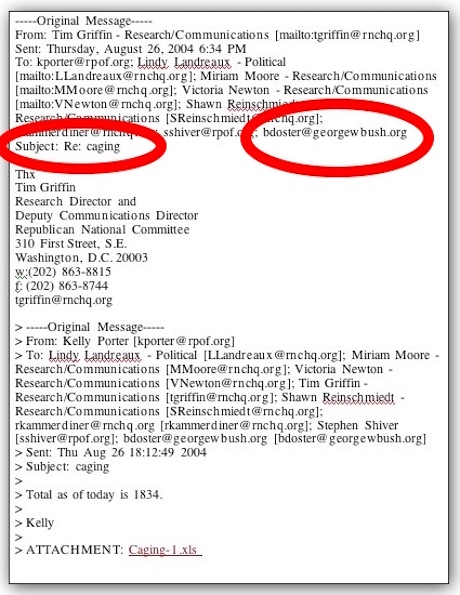 Here was the GOP leadership with their pants around their ankles, exposing their cheat sheets.

Holy Mama! Do I have to believe in God, now?

What we’d been handed proved to be an electronic back door into the darkest corners of a criminal vote-suppression machine.

By the morning, we had booked flights to Washington, DC, and Tallahassee, Florida, while Ms. Badpenny, in charge of our investigations, began the decoding work. We knew there was a scheme afoot, but what exactly was it?

Smoking-gun memos rarely read, “Louie, this is how we cheat the public,” or “Brett, here’s the plan to steal Florida.” If they do say that, they’re fake.

These e-mails’ clues were a bit tougher than most to crack. That pudgy little wad Griffin had written to Doster several e-mails with the cryptic subject line Caging.xls, with Excel files attached, and terse messages like “Here’s another list.”

Each was a very selective list of voters, names, and addresses. What struck me right off were names like Rodriguez, Washington, and Goldberg – typically Hispanic, black, and Jewish. Badpenny and the crew mapped the addresses and, sure enough, it was a perfect scattergram of poor, minority neighborhoods and townships with Gone With the Wind names like “Plantation, Florida.” There was also that list of Yiddish names from retirement homes: the GOP was certainly targeting the Elderly of Zion.

At the Bush headquarters in Florida’s capital, Campaign Director Doster agreed to an interview. But when BBC required me to disclose we had his “caging” e-mails, Doster fled like a bunny into his Tallahassee offices and sent out his mouthpiece, Mindy Tucker Fletcher, clutching a supersized cup of Coca-Cola as big as a mortar shell. She brought a flunky to nod at whatever she said, and a sneering list of explanations, beginning with a corker: the “caging” lists, she said, were a compilation of Republican donors.

Really? Including these folks? Here were the Bush-Cheney “donors” who all lived at the State Street Rescue Mission: 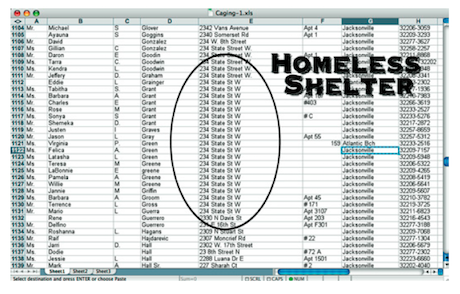 Page after page of names contained residents of homeless shelters.

A “caging list,” she explained, was a term of art in the junk mail business referring to returned letters. I knew that. The Republicans, she said, didn’t want to send duplicates to wrong addresses.

You don’t say! So Mindy, you’re telling me that Karl Rove’s top attack dog is now running the mailroom via confidential messages to state party chairmen ”” for address corrections?

Why don’t I give you one more try, Mrs. Tucker Fletcher. Could these, by chance, be lists used to systematically challenge the registrations of voters of color?

Mindy Tucker Fletcher grinned and said, carefully, “This is not a challenge list. That’s not what it’s SET UP to do.” Bingo.

You see, we’d already made a couple of visits to experts before stopping by Fortress Bush. After sending the lists to America’s junk mail king Mark Swedlund, who’d helped me on many an undercover investigation, I had a damn good idea what these were – an opinion confirmed, without prompting, by Ion Sancho, Florida’s county elections supervisor, the recognized expert on voting systems ”” and vote heists. “They couldn’t be anything but challenge lists. And if they are, they’re breaking the law.”

More than one law, actually, especially if the targets have a racial or religious profile. And it would be breaking a consent decree: years earlier, the Republican National Committee was caught challenging black voters en masse at polling stations and had promised, under penalty of perjury, not to do it again.

Now it looked like they were doing it again, but in a most sophisticated way. Bobby Kennedy explained the game: “They send out letters to poor black and Hispanic voters, first class, with instructions to return, don’t forward, if the letter is not deliverable. The returned [“caged”] letter is then used as evidence the voter’s listed address is fraudulent, and the Republican functionary then gets the name struck from voter rolls, or the absentee ballot, if mailed in, is not counted.”

Targeting the black, Hispanic, and Jewish vote this way is not just icky and racist, it’s against the Voting Rights Act of 1965, which Kennedy’s late father Bobby Sr., the US attorney general, and his uncle, President John Kennedy, helped draft. Bobby Jr., looking at the evidence, suggested hard time for Griffin and Rove.

But who was going to prosecute Griffin and company, anyway? Was the Bush Justice Department going to tell Mr. Griffin, “spread’m?” Mr. Griffin, of the Bush campaign? Mr. Griffin, assistant to the senior advisor to President Bush?

*****
Before turning to journalism as an investigative reporter for The Guardian and BBC Television, Greg Palast was an investigator of fraud and racketeering for governments and labor unions worldwide. His investigations have appeared in Rolling Stone, Harper’s and New Statesman. Known as the reporter who exposed how Katherine Harris and Jeb Bush purged thousands of Black voters from Florida rolls to steal the 2000 election for George Bush. Palast has written four New York Times bestsellers, including Armed Madhouse, Billionaires & Ballot Bandits, and The Best Democracy Money Can Buy, now a non-fiction movie.

Stay informed, get the signed DVD, a signed copy of the companion book – or better still, get the Book & DVD combo.