For The Huffington Post
Five years ago this week, a beast drowned New Orleans. Don’t blame Katrina: the lady never, in fact, touched the city. The hurricane swept east of it.
You want to know the name of the S.O.B. who attacked New Orleans? Locals call him “Mr. Go” – the Mississippi River-Gulf Outlet (MR-GO).
MR-GO was undoubtedly the most bone-headed, deadly insane project ever built by the Army Corps of Engineers. It’s a 76-mile long canal, straight as a gun barrel, running right up from the Gulf of Mexico to the heart of New Orleans.
In effect, MR-GO was a welcome mat to the city for Katrina. Experts call it “the Hurricane Highway.”

Until the Army Corps made this crazy gash in the Mississippi Delta fifty years ago, Mother Nature protected the Crescent City with a green wreath of cypress and mangrove. The environmental slash-job caused the government’s own hydrologist to raise alarms from Day One of construction.
Unless MR-GO was fixed or plugged, the Corps was inviting, “the possibility of catastrophic damage to urban areas by a hurricane surge coming up this waterway.” (I’m quoting from a report issued 17 years before The Flood.)
A forensic analysis by Dr. John W. Day calculated that if the Corps had left just 6 miles of wetlands in place of the open canal, the surge caused by Katrina’s wind would have been reduced by 4.5 feet and a lot of New Orleaneans would be alive today.

The Corps plugging its ears to the warnings was nothing less than “negligence, insouciance, myopia and shortsightedness.” 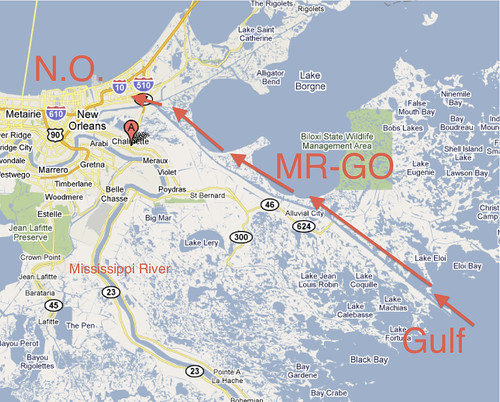 That list of fancy epithets poured from the angry pen of Federal Judge Stanwood Duval who heard the evidence in a suit filed by the surviving residents of the Ninth Ward and St. Bernard’s Parish. His Honor ruled that the drowning of the Ninth Ward and St. Bernard Parish was a man-made disaster.
In November 2009, Judge Duval ordered the federal government to pay to rebuild homes, and compensate families of the dead.
The day Duval issued his verdict, I wrote in my notebook, “Barack Obama has before him a choice to make, one that will reveal the soul of his Presidency more than his choice of troop levels in Afghanistan: whether he will compensate the families who lost all they ever had, or appeal the court’s decision, and thereby ‘Bush’ New Orleans once again.”
But President Hope said ‘Nope.’ As the fifth anniversary of the drowning of the city approached, Obama’s Attorney General Eric Holder flat out refused payment and filed a notice of appeal.
It was George W. Bush who gave the middle finger to the victims of the Corps’ cruel negligence and fought the claims for compensation. Now, Obama has made Bush’s pitiless renunciation of New Orleans his own policy just as Obama turned Bush’s war in Afghanistan into his own
In fact, other presidents have said, we owe, we pay.
In 1976, President Gerald Ford ordered payment to the victims of the collapse of the federal government’s built Teton Dam, Idaho, saying, “No government has the power to eliminate tragedy from human experience, but government can and government should act quickly to minimize the pain of a great disaster. Today, I am signing a bill which provides legislative authority for the compensation of personal and property damage sustained by the victims of the flood.”
Jerry Ford!
Then, in 1994, after sea barriers built by the Army Corps failed in a storm washing away homes in Westhampton Dunes, New York, the Clinton Administration paid to rebuild every one of the $3 million mansions. Not only that: To insure that the hedge-fund sharks and media moguls in this wealthy Hamptons resort wouldn’t get their beach blankets wet, the feds paid an extra $25 million for sand to recreate the beachfront.
But the Ninth Ward isn’t the Hamptons, is it?
The facts are undeniable; even the government accepts that MR-GO threatened New Orleans. Congress has ordered the Army Corps to dump nearly half a million tons of rock into MR-GO to shut the damn thing.
Still, the Administration drags its feet on payment under the legal theory of “Discretionary Function.” In lay terms, that means, “Nyah, nyah, nyah! You can’t hold the Army Corps responsible for gross negligence.” The Justice Department also argued that the court should not consider the number of people drowned. Ugh.
Judge Duval slapped away the government’s cockamamie defense.
So then, Why oh why oh why would Obama, after his grandstanding about BP’s responsibility to the people of the Gulf Coast, refuse to compensate some of the same people for the far greater damage caused by the Corps?
Let me tell you: it goes beyond the money. To “make things right” means Obama would have to face down powers fiercer than any Taliban: Big Oil.
The widening of MR-GO drowned New Orleans; it was not an Act of God. It was an Act of Chevron. An Act of Shell Oil. And, yes, an Act of BP.
The Army Corps admitted that it used its “discretion” to put shipping above safety. The choice was made to help the Gulf oil giants move their crude. Now they’ll have to take a little detour.
I talked with Jonathan Andry yesterday, the litigator for the Katrina survivors. Obama’s decision to appeal the verdict really set him off. “We gave $185 billion to AIG to pay off crooks. I represent people who lost their lives, their family homes, their jobs in one day.”
He seemed far more upset than I expected from an experienced litigator. On a hunch, I said, “Did you lose your own home?”
Andry was quieter. “Evacuated in one car with four kids, three cats, one dog and one wife to Faraday.” And they never came back. The home on Lake Pontchartrain, in the family for generations, was washed away. Just dirt there now.
Ever the reporter, I asked if he’d taken a photo of it. “Can’t look. Too painful.”
I think back to the river city where I once worked, where my own kids played and where I fell in love; and then I look at my President cowering behind his “discretionary function,” and I too find that what I see is much too painful.
*********
Investigator Greg Palast’s film, Big Easy to Big Empty: The Untold Story of the Drowning of New Orleans [see trailer] was created for Democracy Now! and LinkTV.
Make a tax-deductible donation and get the signed DVD which includes Amy Goodman interviewing Palast.
Subscribe to Palast’s Newsletter and podcasts.
Follow Palast on Facebook and Twitter.
GregPalast.com