Incumbent Brian Kemp is coming up against Stacey Abrams again in the election for Georgia’s Governor this November, and he’s pressing on all the same buttons as he did before. A victory in the 2022 election, in turn, sets him up to be the decider, in Bush parlance, in 2024.

“Literally 200,000 voters are facing a blockade of their vote going into November.
That’s what I’m trying to expose in my new film, Vigilante: Georgia’s Vote Suppression Hitman.”

This November in Georgia, you not only have the rematch between Stacey Abrams and Brian Kemp for Governor, but you have Senator Reverend Raphael Warnock, who’s running for reelection against Herschel Walker, the big football hero Republican. We have a 50/50 Senate, so there’s a lot at stake.

If the public says no more Warnock, or we don’t want Stacey, I have no problem with that. I’m kind of a fan of democracy, of counting the votes. The problem in Georgia is that they are at the cutting edge of what we politely call “vote suppression”. The only reason Brian Kemp is Governor is that he removed over half a million people from the voter rolls before he ran against Stacey Abrams four years ago.

In 2018, Kemp was Secretary of State, which also meant he was in charge of counting the votes when he ran for Governor against Abrams. Usually, if you are the Secretary of State, it is traditional in Georgia and every other state that you resign if you’re going to run for Governor, because you shouldn’t be counting your own votes. He refused, he knocked off Stacey Abrams’ voters, and this year he’s taken back control of the election from his own Secretary of State, that he appointed by the way.

In March 2021, Kemp signed a brand new voting law, SB202, which gives him the authority to take over elections. So, once again, Kemp is counting his own votes, and in 2024, SB202 will also give him the right to overturn what any election board says.

I would note that it’s not like he won’t use this power, because literally as soon as he signed the law he removed a very vocal election expert, Helen Butler, from the Morgan County elections board, then he removed 9 more local board officers. He’s removing the people with real expertise, because he knows that they’ll get in his way.

Kemp’s new law also says that any voter can challenge an unlimited number of other voters’ right to vote. There is one woman, you’ll meet her in my new film, she’s a GOP operative who has personally challenged 32,379 voters in Cobb County. She challenged so many names, she said she didn’t wanna spend the money to print them all out, so she handed in a thumb drive and said, don’t let these people vote. This has got no national attention, but in total, 88 GOP operatives have filed a breathtaking 364,000 challenges to Georgia voters, who are now facing a blockade of their vote.

Edited excerpt from Beowulf Rochlen’s interview with Palast for the Facepalm America podcast. Listen to the full interview via the player above or on Apple Podcasts, Google, Spotify, iHeart Radio, or PodFollow.

Get your name in the screen credits before we go to print — alongside our Executive Producer Martin Sheen and Academy Award-winning Producer Maria Florio. Your donation is tax-deductible.

Be listed in the credits as a Supporter for $100, a co-Producer for $500 or a Producer for $1,000. Or be a film backer for any amount no matter how large or small. As a screen credit donor, you will also get a signed DVD — or a download of the film if you prefer.

DONATE
Get a Screen Credit 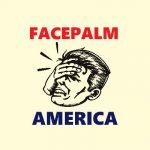 Beowulf Rochlen is the producer and host of Facepalm America, a podcast that covers the inanity and insanity of American politics and culture in the first half of the 21st century.