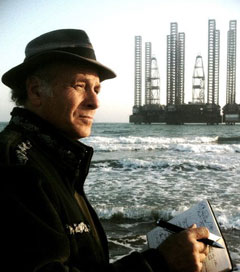 Only 17 months before BP’s Deepwater Horizon rig suffered a deadly blowout in the Gulf of Mexico, another BP deepwater oil platform also blew out.
You’ve heard and seen much about the Gulf disaster that killed 11 BP workers. If you have not heard about the earlier blowout, it’s because BP has kept the full story under wraps. Nor did BP inform Congress or US safety regulators, and BP, along with its oil industry partners, have preferred to keep it that way.
The earlier blowout occurred in September 2008 on BP’s Central Azeri platform in the Caspian Sea.
As one memo marked “secret” puts it, “Given the explosive potential, BP was quite fortunate to have been able to evacuate everyone safely and to prevent any gas ignition.” The Caspian oil platform was a spark away from exploding, but luck was with the 211 rig workers.

It was eerily similar to the Gulf catastrophe as it involved BP’s controversial “quick set” drilling cement.
The question we have to ask: If BP had laid out the true and full facts to Congress and regulators about the earlier blowout, would those 11 Gulf workers be alive today – and the Gulf Coast spared oil-spill poisons?
The bigger question is, why is there no clear law to require disclosure? If you bump into another car on the Los Angeles freeway, you have to report it. But there seems no clear requirement on corporations to report a disaster in which knowledge of it could save lives.
Five months prior to the Deepwater Horizon explosion, BP’s Chief of Exploration in the Gulf, David Rainey, testified before Congress against increased safety regulation of its deepwater drilling operation. Despite the company’s knowledge of the Caspian blowout a year earlier, the oil company’s man told the Senate Energy Committee that BP’s methods are, “both safe and protective of the environment.”
Really? BP’s quick-dry cement saves money, but other drillers find it too risky in deepwater. It was a key factor in the Caspian blowout. Would US regulators or Congress have permitted BP to continue to use this cement had they known? Would they have investigated before issuing permits to drill?
This is not about BP the industry Bad Boy. This is about a system that condones silence, the withholding of life-and-death information.
Even BP’s oil company partners, including Chevron and Exxon, were kept in the dark. It is only through WikiLeaks that my own investigations team was able to confirm insider tips I had received about the Caspian blowout. In that same confidential memo mentioned earlier, the US Embassy in Azerbaijan complained, “At least some of BP’s [Caspian] partners are similarly upset with BP’s performance in this episode, as they claim BP has sought to limit information flow about this event even to its [Caspian] partners.”
In defense of its behavior, BP told me it did in fact report the “gas release” to the regulators of Azerbaijan. That’s small comfort. This former Soviet republic is a police state dictatorship propped up by the BP group’s oil royalties. A public investigation was out of the question.
In December, I traveled to Baku, Azerbaijan’s capital, to investigate BP and the blowout for British television. I was arrested, though, as a foreign reporter, quickly released. But my eye witnesses got the message and all were too afraid tell their stories on camera.
BP has, in fact, never admitted a blowout occurred, though when confronted by my network, did not deny it. At the time, BP told curious press that the workers had merely been evacuated as a “precaution” due to gas bubbles “in the area of” the drilling platform, implying a benign natural gas leak from a crack in the sea floor, not a life-threatening system failure.
In its 2009 report to the US Securities and Exchange Commission (SEC), BP inched closer to the full truth. Though not mentioning “blowout” or “cement,” the company placed the leak “under” the platform.
This points to a cruel irony: the SEC requires full disclosure of events that might cause harm to the performance of BP’s financial securities. But reporting on events that might harm humans? That’s not so clear.
However, the solution is clear as could be. International corporations should be required to disclose events that threaten people and the environment, not just the price of their stock.
As radiation wafts across the Pacific from Japan, it is clear that threats to health and safety do not respect national borders. What happens in Fukushima or Baku affects lives and property in the USA.
“Regulation” has become a dirty word in US politics. Corporations have convinced the public to fear little bureaucrats with thick rulebooks. But let us remember why government began to regulate these creatures. As Andrew Jackson said, “Corporations have neither bodies to kick nor souls to damn.”
Kicking and damning have no effect, but rules do. And after all, when international regulation protects profits, as in the case of patents and copyrights, corporate America is all for it.
Our regulators of resource industries must impose an affirmative requirement to tell all, especially when people, not just song lyrics or stock offerings, are in mortal danger.
*********
Greg Palast directed the fraud investigation of BP and Exxon in the grounding of the Exxon Valdez for the Chugach Natives of Alaska. Palast’s investigative reports can be seen on BBC Television Newsnight. See them at www.GregPalast.com.
Subscribe to Palast’s Newsletter and podcasts.
Follow Palast on Facebook and Twitter.
GregPalast.com